The mad scientists among you will be happy to hear that Ndemic Creations have released the Mutation 15 update for their strategy title, Plague Inc.  This latest mutation, titled The Mad Cow Disease Update, sees the release of three brand new official scenarios to challenge players. 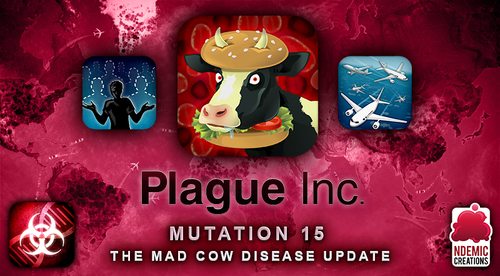 The three new scenarios in The Mad Cow Disease Update are:

Mad Cow Disease
With panic over BSE besieging the beef industry in the 1990s you would think there would be better measures against another outbreak in place.  However, unforeseen protein folding has resulted in a new variant of this prion that threatens the whole food chain.  Can you infect everyone before they turn vegetarian?

Where Is Everyone?
Thanks to an almost supernatural event almost everyone in the world has mysteriously vanished and nobody knows why.  Luckily, a few thousand people are left behind and are carrying on as normal.  Players will face an epic challenge of how to spread their plague when there are so few people left to infect.

Flight Club
Humanity have unlocked the true potential of suborbital flight for commercial ventures, as a result every country has an airport. Players can see how many air miles their plague can get.

“Mad Cow Disease was a particularly intriguing scenario to put together, as we got to really think hard about what the world would look like if there was a re-emergence of the infamous 1990s outbreak,” says Plague Inc. creator James Vaughan. “Although we naturally took the research and ran with it, so expect a few surprises as you figure out the best way to wipe out humanity via food!”

Mutation 15 is available now on iOS and will come to Android very soon.