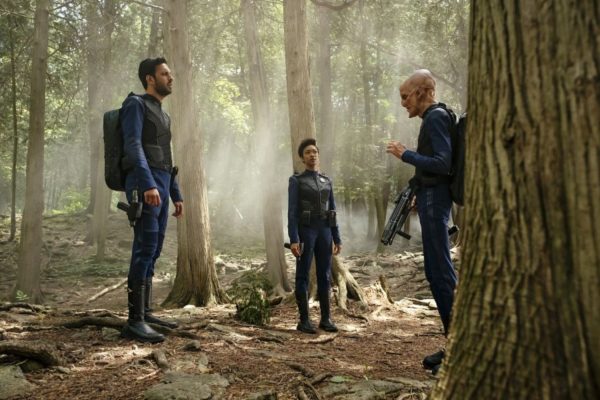 Is this what harmony and balance look like? Where is the peace you say you found here?

There’s something pretty classically Star Trek about this episode of Discovery.

An in medias res opening gives us a good look at the Discovery in action, with some impressive space battle action – using the ship to take the hit from the torpedoes was a clever idea, one I’m surprised we’ve not really come across in Trek before. It’s got an alien planet – not Discovery’s first, but certainly it’s most central. Pahvo’s an impressive vista, a far cry from the wobbly sets and soundstages of yesteryear; it’s another example of the benefits of Star Trek: Discovery’s budget, and the aesthetic running through it.

We’ve also got the classic noncorporeal aliens, and one of our first references to the prime directive. There’s something nice about seeing this crew in a first contact scenario, taking them away from the war – more than that, though, it’s a demonstration that the old style of Trek can still work. Discovery, long may it continue, won’t always have to be about conflict with the Klingons – eventually, it can (and hopefully will) get back to actually discovering things. Indeed, you could perhaps read this episode as another pilot in and of itself – a reminder that a Star Trek based around exploration can still work in the 21st century.

In a way, that brings us back to a question posed in initial episodes that we’ve not really looked at since – what does it mean to be Star Trek today? Approaching the end of this half of the season – ‘Si Vis Pacem, Para Bellum’ was originally set to be the midseason finale – it’s worth asking just what the answer has been.

Admittedly, I don’t entirely know quite what Discovery has concluded; in a very real sense, it’s still growing into itself, and doesn’t always know what it wants to be. In some ways, it struggles underneath the weight of the franchise, able to be bold and new within those confines but not necessarily within its own right. Perhaps the more important part of ‘Si Vis Pacem’ is not in offering a definitive answer to the question, but in showing us that Discovery can offer more than one answer. 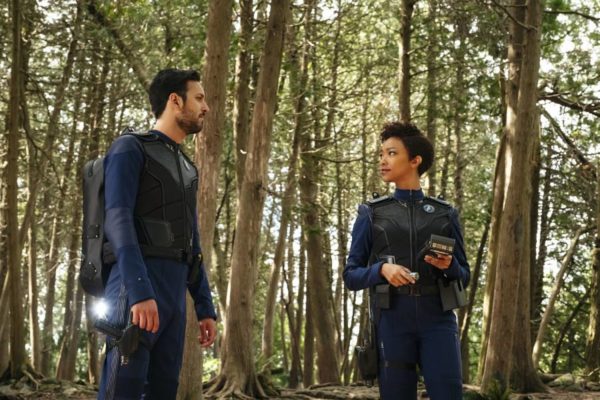 While focus is split across three different plotlines, the main thrust of the episode of undeniably on Saru, Burnham and Tyler. In a way, this episode gives us some of the strongest character work that we’ve seen from Discovery so far; you could argue perhaps that that’s damning with faint praise, given the series has been patchy with this so far, but I think it’s still worth remarking on this.

There’s some great stuff with Saru here, delving into what it means for Kelpians to exist as a prey species. It works because of its sincerity; though certainly the planet influenced him, ultimately what drove him came from within. That pursuit of peace, of an existence without fear, is eminently understandable; this is a standout moment for the character, buoyed by Doug Jones’ fantastically emotive performance.

Burnham and Tyler’s relationship works here, in a way that it didn’t particularly last week. Admittedly I’m not wholly sure just why it feels like it gels now, but didn’t last week; I suspect in part because it’s subtler and more intimate, without the classroom-esque “He likes you” twisting and interference from last week. The quiet contemplation of their divergent fates is strong; the fact that Burnham, in the end, is still doomed to prison even if they win the war is quite poignant. Meanwhile, Ash Tyler feels like he makes sense as a character for the first term – there’s a certain interiority to him here, to the point that he works in a way that he hasn’t thus far.

Incidentally, with regard to Ash Tyler’s obvious Klingon secret identity, I’ve reappraised my theory somewhat. I’m less convinced now that Tyler is simply Voq outright; increasingly I’m getting the impression that it’s more complicated. Perhaps Tyler doesn’t actually know he’s a Klingon (unlike the audience)? In turn, L’Rell’s desire to defect is presumably with the intention to activate Tyler the sleeper agent so that they can… you know, war or something, fighting, all that. 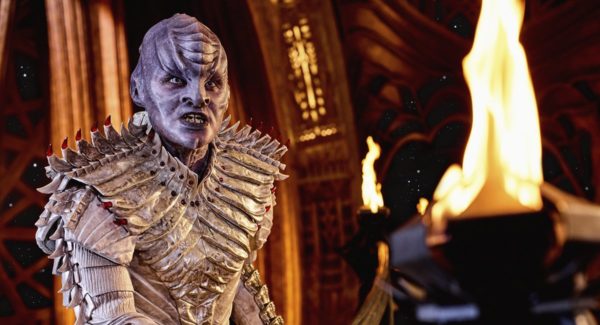 After an absence last episode, the Klingons take centre stage once more.

L’Rell is an interesting character – I’d argue in fact that she’s the most interesting of the Klingons at the moment. Granted, they’re all still struggling a little bit; there’s almost a feeling that we’ve swapped actual character work for the novelty of speaking in Klingon. It’s always just on the cusp of success, of making the Klingons work – but the backstabbing and the intrigue and the treachery doesn’t quite work when all it comes down to is “the Klingons are warlike”. There’s a certain cultural determinism in play here, and that imposes certain limitations on the Klingons as characters. It’s difficult to sympathise with, or even understand, the aim to protect their culture if we don’t get a chance to see the value of said culture, or what it is beyond “fighting” – though having said that, it seems like they’ve abandoned that angle anyway.

The matter of Admiral Cornwell is interesting, albeit somewhat confusing. Are we to take it that she’s dead? It seemed unintentionally ambiguous, unclear whether it was meant to be a misdirect for the Klingons or something poorly conveyed to the audience. If she is dead, that’s a shame – the character had more potential than what was gained from her death in terms of the ongoing story. Further, though, there’s the matter that the third major character death of Discovery is a female character again. As isolated events, that wouldn’t matter, but there’s definitely a trend beginning to emerge – which is why it’s necessary to ask exactly why it’s always the female characters being killed off on Discovery.

Assuming she was killed off, anyway, it’s a bit difficult to tell.

Ultimately, this was an entertaining offering from Star Trek: Discovery. It put its characters front and centre, while still finding space for some classic Trek exploration; at the same time, it set the stage for an exciting midseason finale next week. (Although it’s a little too early to tell, I suspect it was a good thing that they chose to bring another episode forward – ‘Si Vis Pacem’ is strong, but perhaps not midseason finale quality.)