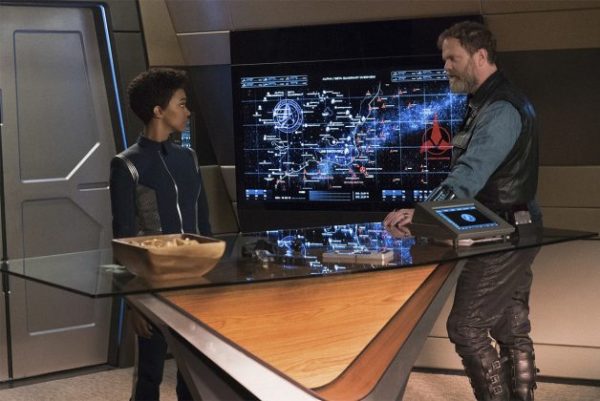 Here, admittedly, I’m beginning to have my doubts about the choice to build Discovery around one central character in a way that previous iterations of Trek didn’t.

The time loop is a staple of Trek, an idea that’s returned to (appropriately) time and time again – you can point to equivalent examples on The Next Generation, Deep Space Nine, Voyager and Enterprise. (Granted, this does beg the question of whether ‘Magic To Make The Sanest Man Go Mad’ was another checklist type episode, done simply because Star Trek has to have an episode in this vein.) Each of these episodes tend to draw focus to a different character; indeed, given the ensemble style of Star Trek, a lot of episodes would pivot around different characters, giving each one centre stage week on week. That’s something that Discovery very much hasn’t done; while there’s undeniably been divergences and sidesteps, it’s largely always about Burnham.

This comes with its advantages, certainly; Burnham is well characterised at this point, and it lets us dwell on Sonequa Martin-Green’s fantastic performance, which is difficult to bemoan too much. But, at the same time, it’s difficult not to feel like we’re missing out a little bit – certainly, the other characters feel decidedly thin in some respects, or at least with a lot of unexplored potential.

In that regard, ‘Magic To Make The Sanest Man Go Mad’ is demonstrative of a lot. Plot contrivance aside, there’s little particular reason why Stamets couldn’t have been the one to ask Tyler about Mudd; ultimately, that it was necessary for Burnham to ask him is reflective only of a series of choices from the writers. That prompts the question, though – why those choices?

Certainly, it’s not difficult to imagine a version of this episode where Burnham was largely on the periphery; one in which the focus was on Stamets and Tyler primarily, without needing Burnham to intercede on their behalf. Taking the time to dwell on the supporting characters would be welcome at this point in the series, not least because they’re often so charming. (How brilliant is Ensign Tilly? She is a gift, honestly.) We’re already at the halfway point of the series, and only have about three weeks left in the first run of episodes – soon it’ll be time for the midseason break. Beyond Burnham, how much time have we spent on each of the characters?

Don’t get me wrong, there have definitely been some moments to flesh out the supporting characters; Stamets telling Burnham about how he and Dr Culber first met was really quite sweet. But I don’t think it’s unfair to want to see a little more of that. 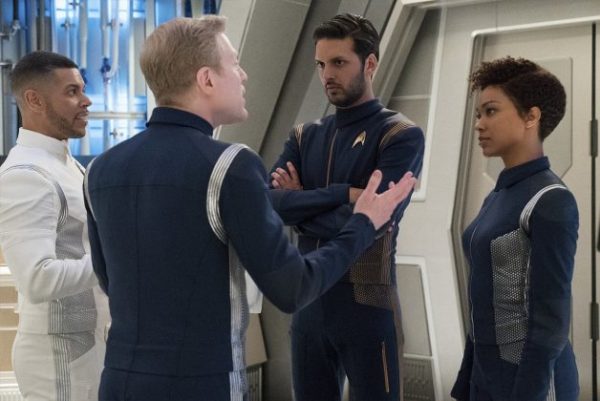 Of course, the question posed about is a void. Why did Stamets need Burnham to intercede on his behalf with Tyler? Well, that’s because it’s time for Burnham and Tyler to get together.

In a way, it’s a little… childish is the wrong word. Overly simplistic? Maybe. If nothing else, it’s definitely poorly placed; the episode largely grounds to a halt just so we can take a break to watch Burnham learn to dance and have her first kiss. Structured as it is, the whole thing feels just a little superfluous – but then, equally, it’s perhaps also a victim of the same ‘least interesting choice’ syndrome that Discovery has fallen foul of previously. Burnham is uncomfortable because she’s never been to a party before, because she’s a great big nerd Vulcan. (Or human-raised-as-a-Vulcan.) Was there not another direction this could have been taken in? Or, at least, another perspective to view it from? It works fine, sure, but it’s so familiar I suspect the Discovery team could have written it in their sleep if they wanted to.

Admittedly, I’m struggling to take this entirely seriously. Really, that’s down to me – I’m so utterly convinced now that Tyler is a Klingon in disguise that it’s difficult to get particularly invested in his relationship with Burnham. I can’t help but feel as though the different beats of this story have already played out; the first time she falls in love she’s betrayed, it spurs her on to defeat the Klingons, whatever, I don’t care, saw it coming ages ago. This is probably an unfair stance to take; no doubt there’s a significant number of people who don’t know (yes, “know” rather than “think”) that Tyler is a Klingon, and I only do because of background reading. That does pose an interesting question – to what extent should writers work with that kind of theorising in mind? Perhaps, admittedly, they didn’t think people would work it out as quickly as they have; if so, you’d assume the twist might have been telegraphed somewhat or hinted at.

Also, weirdly, this is the second time that Burnham has been paralleled with a space animal. Last time it was the Tardigrade, misjudged as violent but ultimately pivotal to their mission of peaceful exploration; now, it’s the gormagander space whale, too focused on space-y things to ever find love. Does anyone else think that’s a strange pattern? Taken together I’m not really sure what it suggests, but it’s definitely an odd comparison to recur. 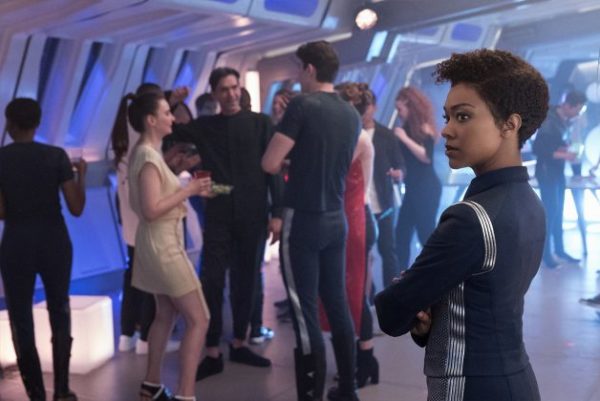 Something that a lot of other reviews have pointed out is that this episode goes against the grain a little bit, standing largely outside Discovery’s ongoing serialised story. Indeed, I think it’s probably fair to call this episode filler – not as a slight against its quality, which is strong enough, but more as an indicator of its broader place within the season. It could have played out last week or next week and made little difference – outside of Harry Mudd’s return (and I’ve made my feelings on him clear already) there’s nothing about this episode that demands it fall in a particular position.

That’s one of the difficulties with a show that has a heavy serialised plot: it makes it more difficult to justify these little side jaunts. It’s not that I want every episode to lead directly into the next, complete with a TO BE CONTINUED card at the end of each one – equally, though, you can’t do this by a half measure. It’s great to have an overarching narrative, but there’s a need to commit to it, rather than dropping things by the side. To take one example: this episode saw Burnham awkward at the party because she’s a bit of an awkward nerd. Don’t most of the crew still blame her for the war? It’s difficult, because you wouldn’t necessarily want her to be in an antagonistic position relative to everyone else on the ship forever, but I don’t really believe there’s been reason enough for everyone to forgive her just yet. Effectively, she’s the Starfleet version of someone like Gavrilo Princip – if Discovery is dedicated to exploring the consequences of Burnham’s actions to tell a character led story, that can’t have been forgotten just yet?

In any case, I do want to take a moment to note that, if I seem critical, it’s not that I don’t enjoy this show. I really do – I’ve said as much in previous reviews. Where I’m finding fault it’s not simply to disparage the show; there’s a lot about it that works, certainly, and it is still largely entertaining to watch. But it’s because I enjoy it that I’m trying to hold it to a higher standard – because I do quite emphatically believe that it could still be better.