With Bungie’s Destiny 2 currently making waves across numerous platforms, it comes as no surprise that this mammoth title is reaching out even further to its ever expanding fanbase.  Bungie has now teamed up with Loot Crate and announced an upcoming special Destiny 2 Limited Edition Crate.  This crate is not only officially licensed by Bungie but it has also been co-developed with them too. 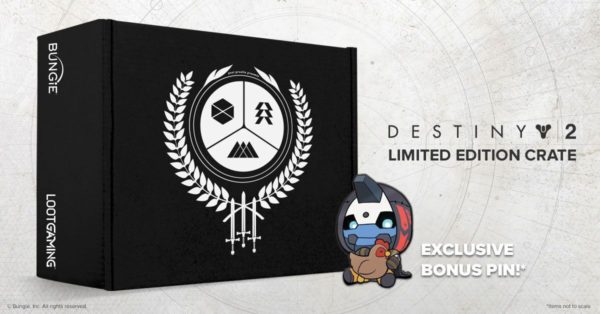 Arriving Spring 2018, the Destiny 2 Limited Edition Crate is available now for pre-order, with prices set at $49.99 (plus shipping and handling) per crate for domestic purchases and $74.99 (includes shipping and handling + VAT) per crate for international purchases.   Pre-ordering the special edition crate online now at www.lootcrate.com/crate/destiny2 will get you an exclusive Cayde-6 pin featuring his chicken comrade.

“The Destiny 2 Limited Edition Crate is a huge win for the fans of the Destiny franchise as it gives the developers even more opportunities to share the rich lore that anchors the universe behind one of 2017’s biggest game launches,” said Chris Davis, CEO of Loot Crate. “We’ve worked with our friends at Bungie to put Destiny collectibles in Loot Crates and Loot Gaming crates and every time we do, fans ask for more – finally we can deliver this one-of-a-kind fan experience.”