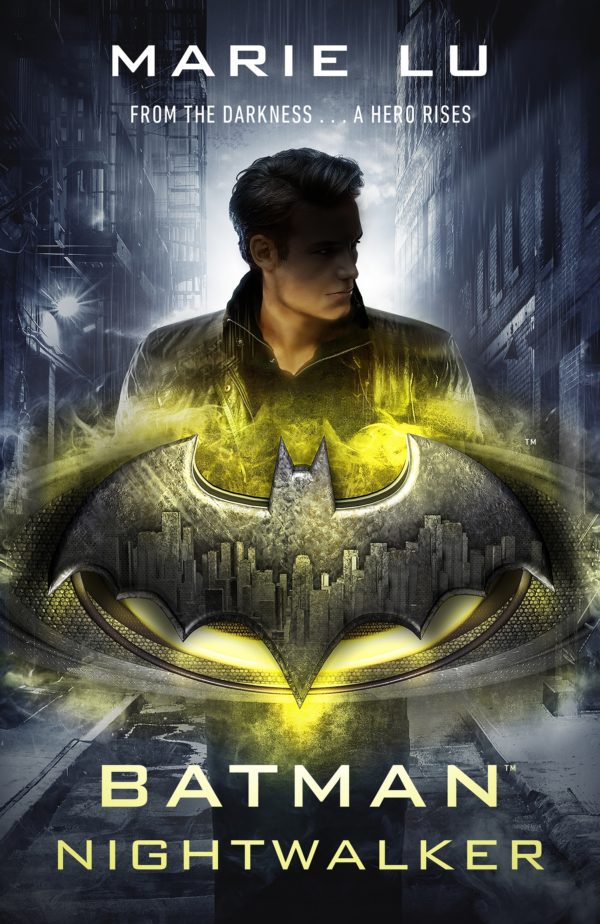 After the summer release of Wonder Woman: Warbringer, the next book in the new DC Icons line focuses on The Dark Knight himself, Batman, or rather, Bruce Wayne in his formative, teenage years. Its an interesting book that takes its time in the build up, examining Bruce at such a critical moment in his life and the way he views Gotham City.

Batman: Nightwalker, written by Marie Lu, sees Bruce getting arrested on his eighteenth birthday for interfering in a police chase. Sentenced to community service at Arkham Asylum, Bruce comes into contact with Madeleine, a young inmate with ties to a group calling themselves the Nightwalkers, targeting the city’s rich and elite by stealing their money and murdering them in their own homes. Bruce gets entangled in the police investigation through Madeleine, but is he getting closer to her and solving the mystery of the group or is she manipulating him as their next target?

Lu writes a compelling take on a teenage Bruce Wayne. This isn’t the most typical version of young Bruce, one who immediately swore vengeance against crime and made a vow on his parent’s graves, but he still has a sense of right and wrong and a desire to help the downtrodden in Gotham. Lu gives Bruce a good voice and makes him a compelling protagonist and his arc pretty clear as he learns more about crime and deception.

Madeleine is also written very well. She’s very much a Hannibal Lecter-type character, one who is very intelligent and sees right through people’s souls. She’s an interesting character with shifting motivations, making you unsure what she’ll do or say next. The scenes between she and Bruce are filled with tension as Bruce has never dealt with this type of person before and she reveals things about him he didn’t even know. Its also great to see Bruce’s insight grow; his study in deception and reading people begins here as he tries breaking down Madelaine’s personality. One aspect of his character that is interesting is how he categorizes people into specific categories, but cannot place her. The relationship between Bruce and Madeleine is the selling point of the book, creating a good back and forth between them throughout the book.

The supporting characters are well written and used to. Alfred and Lucius Fox could have appeared a bit more, but they still have good roles and a good report with Bruce. The friendship between Bruce and Harvey Dent is explored a bit, following Harvey’s most often traditional story element of his youth with his abusive father, and its clear that Bruce and Harvey have a almost brotherly relationship. There’s also the inclusion of a new character named Dianne, making the three of them a group that is almost inseparable. Dianne is an interesting addition to the story. Its interesting how Lu decided to create her rather than use an existing canon character like Silver St. Cloud or Vicki Vale, but its actually refreshing to have another original character in the story.

The story itself is well paced. Nightwalker is a fairly quick read and Lu develops things nicely, evolving the deepening mystery of Madeleine and the Nightwalkers in a way that keeps the pages turning. Its much more of a character piece, studying the young man Bruce is, than it is an action adventure story. There’s not many times where the book gets boring or slows down; everything moves well and is exciting, particularly in the last half of the book when Bruce’s investigation into the Nightwalkers really heats up, leading to a great bit in Wayne Manor. Its engaging, thought-provoking and insightful into the man that will become one of the world’s greatest superheroes.

Batman: Nightwalker is a book that any Batman fan of any age should enjoy. Lu shows a good handle on the characters and mythos of the Caped Crusader. Its well written, Bruce Wayne is likeable and even relatable and has a compelling villain. Its a great addition to DC’s Icons imprint.