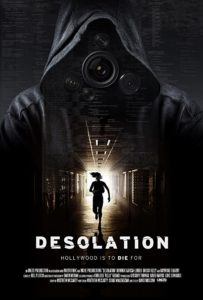 A young woman is plunged into confusion after meeting and agreeing to stay with a Hollywood actor in his Los Angeles apartment.

Offering up a disturbing look at the Hollywood industry and the trappings of fame, this psychological thriller from David Moscow works well at keeping the guesses coming and painting a picture of a greedy and aspirational society. While not quite living up to the promise of its first quarter, it has enough of interest for genre fans to take something from.

Katie (García-Lorido) works at a hotel in Elmira, New York, a small peaceful town a world away from the excitement and glitz of Hollywood. But the movie industry soon comes to town in the shape of Jay Cutter (Brock Kelly), a film star heartthrob who is shooting his latest film in town. Katie doesn’t even know who he is, but everyone in town does, and friends and colleagues stop to tell her exactly what a dream he really is. Cutter seems to take a liking to her, and before she knows much about it, he’s jetting her off to LA.

Not long after arriving in Cutter’s swank apartment, he announces that he’s going to have to go off on a shoot for a few days, leaving Katie on her own. Her phone is nearly out of juice with no charger and she doesn’t know anyone in the city. It all escalates pretty quickly with odd neighbours such as the distinctly creepy priest Father Bill (Raymond J. Barry) adding paranoia and unsettling talk to the mix. After a break-in and a hostile response from the local law enforcement, Katie is left completely alone, dejected and in real danger.

Desolation from David Moscow (who, as a child actor was once young Tom Hanks in Big) cranks up the tension. It has more than a few scenes to bring a wince to the eye. Thankfully, amidst a cast of villains with seemingly no redeeming qualities, the character of Katie is someone to support. Her responses to what is a messed up situation to find oneself in are reasonably well drawn out, especially when we learn more of her psychological and emotional history. It is a disturbing thriller and while it  won’t win many prizes for originality – being a well-known tale of exploitation and victimization – it is handled skillfully enough with some surprises in store near the conclusion.