Firaxis and 2K kick off the new year by introducing the Cree, one of the nine new civilisations that players will be able to experience in the Rise and Fall expansion for Sid Meier’s Civilization VI this February.  The latest video for the expansion’s new civilisations provides a ‘First Look’ at the Cree led by Poundmaker.  Watch the trailer for the latest civ below… 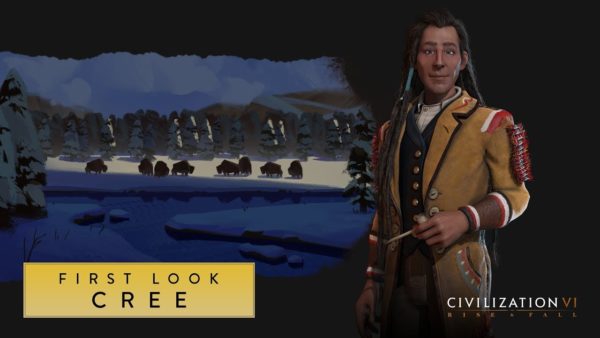 Poundmaker (named after his ability to call bison into pounds) was committed to the survival and peace of his people while negotiating with the Canadian government.  His calm and peaceful approach prevented the deaths of many and his actions were respected by all parties.

Poundmaker’s unique ability is Favourable Terms and allows all alliances to provide shared visibility.  It also allows all external trade routes with cities with camps and pastures to provide additional food.

The Cree’s unique ability is Nihithaw and provides some useful trade advantages.  When pottery is discovered the Cree will receive their first trade route, not only that but when a trader moves onto an unclaimed tile within 3 tiles from a Cree city then that tile is claimed.

Okihtcitaw is the Cree’s unique unit and replaces the scout.  However, unlike the scout it receives a free promotion and has additional combat strength.

Finally, the Cree’s unique structure is the Mekewap.  This structure will provide housing and production plus gold when it is placed adjacent to a luxury resource or food when placed next to a bonus resource

Alliances and trade will be the route to success for the Cree in the Rise and Fall expansion for Sid Meier’s Civilization VI.