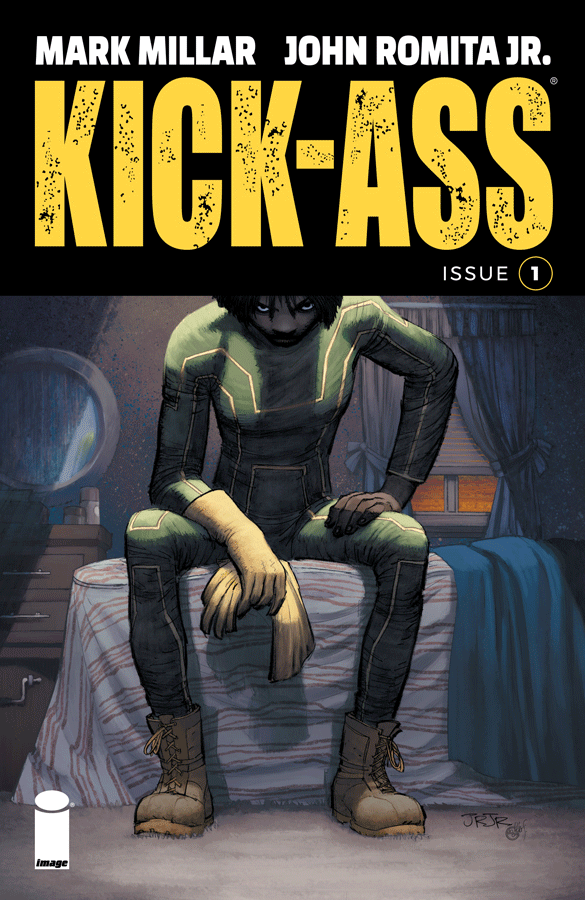 In October 2014, Mark Millar appeared to definitively finish with one his most lucrative properties; Kick-Ass.

Having developed the violent-universe and its larger-than-life characters over the course of 8 years (it started life in 2006 as a completely different project) 23 issues, 2 movie adaptations and a separate spin-off volume, Millar finally reached the logical end of his meta-premise. With no where left to go for the high-concept narrative, Millar wisely concluded the tale in a decidedly finite way. Dave Lizewski retired from the vigilante game, settling down with his new girlfriend and trading in his signature wet-suit for a police uniform. The bad-guys were all defeated, the heroes were granted their happily-ever-after and there was no foreseeable room for a sequel. After all, if there’s no more Dave Lizewski, then there can be no more Kick-Ass.

Or so it would seem, yet evidently Dave’s creator saw things a bit differently. You see, for Millar, Lizewski is not actually a pre-requisite for a Kick-Ass story. Instead, the writer takes the view that Kick-Ass is more of a symbolic identity, much like with Christopher Nolan’s interpretation of the Caped Crusader. According to Millar, the mask is simply an idea that can be passed down from generation to generation, freely adopted by anyone with an earnest desire to help. The only difference between Kick-Ass and Batman then, is that becoming the former is conceivably possible, as you don’t require unlimited resources, a dedicated R&D team, or years of ninja training in order to qualify. You just need an e-bay account and a slightly elevated capacity to take a kicking.

And so thus we have the new Kick-Ass, which is kind of a soft-reboot in a similar vein to Star Wars: The Force Awakens or Jurassic World. This means that the continuity of the original trilogy is still retained, despite it being retconned as ”The Dave Lizewski years’, i.e. a distinct section of a much bigger saga. However, other than with a couple of tangential references, the past is largely brushed aside as we are introduced to a new protagonist, one with their own unique background, motivation and hardships to overcome.

In this respect, Millar has smartly avoided the trap that frequently ensnares reboots, which is to say that the story he offers is not a cheap rehash. In fact Patience Lee, our new hero, is about as far from an unprepared, scrawny fanboy as you can get. She’s a devoted mother, aged somewhere in her 30s, returning from an 8 year tour in Afghanistan. As a result, she’s got extensive combat experience, a darker edge and she doesn’t give a damn about comic-books. She has too many real problems and responsibilities to contend with. Indeed, crime is an everyday reality for Patience, not something that she wistfully aspires to fight like Dave. Unlike her forebearer, she is not compelled by any misguided fantasies or adolescent feelings of boredom, but rather by the harsh nature of her environment.

For the reader, this means that we don’t get as many winking pop-culture references or inside jokes. Subsequently, the once-snarky writing feels reigned in and less playful than before, arguably detracting from one of core selling points of the original material. It used to be fun to have a character that shared the audience’s affinity for comic-books and Millar himself clearly loved that aspect as well, as it enabled him to indulge in parodic gags and deconstructions of the superhero genre at every turn. Here, he is comparatively restricted by Patience’s sombre circumstances and so the author’s irreverent spark has gone, replaced by a more generic, brooding tone.

What Patience does have though, is years of military training. In the first issue alone, Patience has already surpassed where Dave was at the end of his arc. This is perhaps the biggest diversion of all, as the protagonist is no longer in over-their-head (not yet anyway). In fact, they’re remarkably capable, as evidenced by an enjoyably bloody flashback sequence towards the beginning. But once again, this kind of goes against everything that was previously special about Kick-Ass, as the narrative cannot hope to recapture the same plucky, underdog spirit as the original.  Likewise, it also has the side-effect of somewhat diluting the idiosyncratic humour and stakes that so wonderfully defined the series.

Admittedly, this is a classic Catch 22 situation. On one hand, Millar has to do something radically different in order to keep his franchise feeling fresh. After all, when you make something so trail-blazing and anarchic, no one wants you to see you produce a lazy carbon copy of it later down the line. At the same time though, by changing up the formula so much, Millar has inadvertently robbed his creation of everything that made it feel distinct in the first place. Honestly, there’s no way around this issue, but Millar does at least deserve credit for  trying to mitigate it.

Anyway, there’s still some interesting stuff in this first issue. For example, there’s an intriguing suggestion that Patience might have taken to crime-fighting, not out of altruism, but to satiate her adrenaline craving now that she’s out of the army. Hopefully this angle will be explored further in the future, as it will surely make her a more compelling character. Until then, she’s easy enough to root for and the brutal action is up to the same standard as it before, courtesy of the always dependable John Romita Jr.

Finally, it’s worth noting that there’s still time to improve. After all, the first book didn’t truly hit its stride until the introduction of a certain foul-mouthed tween at the end of its third issue. So if Millar has something (or someone) of a similar calibre up his sleeve for this, then that could really step things up a gear.