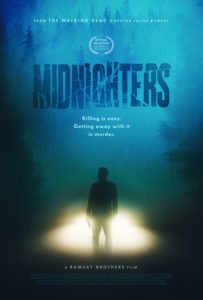 Midnight, New Year’s Eve: when all the hopes of new beginnings come to life – except for Lindsey and Jeff Pittman, whose strained marriage faces the ultimate test after they cover up a terrible crime and find themselves entangled in a Hitchcockian web of deceit and madness. 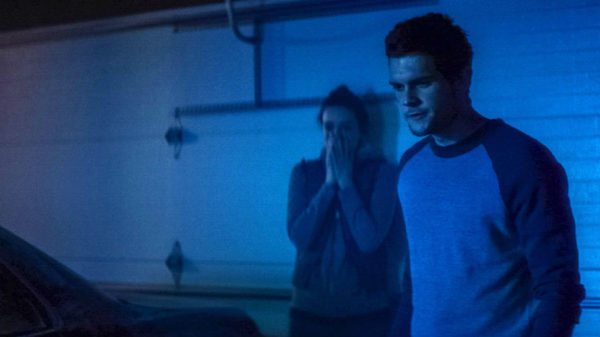 Opening up with relationship problems put out in the open and some irresponsible New Year’s Eve drunk driving leading to accidental manslaughter doesn’t exactly create endearing protagonists. Why do I want to see these people dispose of the body, eradicate all the evidence, and get away clean with murder? Well, Midnighters (directed by former The Walking Dead editor  Julius Ramsay and written by his political speechwriter brother Alston Ramsay) is chock full of surprises up its sleeve, especially in that it’s a thriller of errors beginning completely unlikable that over time reveals itself to be twisted and thoughtful, commenting on gender politics as its characters become increasingly warped and full of hidden motives.

Their rationale and logic are often farfetched so as to stick with the core theme of how sleazy and manipulative boyfriends can be, but the unbelievable behavior is freely overlooked when the experience is this bonkers. With that said, Midnighters runs one scene and twist too long, as if no one realized the ending was far more out of character for the sole survivor than anything else in the movie and enough to report that it badly needed to be changed so the credits simply roll at the appropriate and obvious moment. Without spoiling what I’m alluding to, the stakes are ramped up when a hefty sum of desperately needed money comes into play, and it’s that financial security being dangled in front of everyone like a carrot that further brings out their seedier and negative traits. 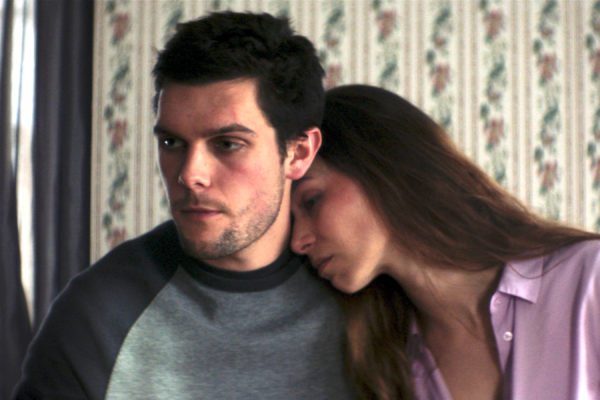 To sum it up, a dead body leads to more mystery and unexpected money, and while it’s hilarious and annoying watching the couple Lindsey and Jeff (played by Alex Essoe and Dylan McTee respectively) and Lindsey’s sister (Perla Haney-Jardine who actually began her acting career as B.B. in Kill Bill) bumble their way through lying to incompetent  police officers investigating the home (a lost license plate in the middle of a Rhode Island highway points them in the direction of this duo, who can’t claim it was accidental considering Jeff was operating the vehicle under the influence) that barely search anything in-depth and accept the laziest of answers. The acting from everyone, unless they are in danger, is equally unimpressive and stilted. However, there is an exception when a “detective” comes by for a follow-up inspection who may or may not be who he says he is.

And this brings us to arguably the strongest aspect of Midnighters (aside from how smoothly the narrative presents itself as exploring the manipulative role of men in many relationships), Ward Horton’s presence as a malicious piece of work, smiling with pure evil as he delivers every unsettling line. There’s an uneasy exchange where he randomly brings up astrology before he gets to his torturous antics, which is just one of many bizarre tics of this dastardly, bizarre, but oddly entertaining piece of nastiness. He taunts Jeff about his failed baseball career, goes around the house sniffing panties like the ultimate creeper, and will stop at nothing or get rid of anyone to accomplish his goal. Horton’s presentation is the exact same as his poorly executed turn in Annabelle, but he isn’t god-awful here simply because the casting is right this time. The disturbing smile is also there in every single scene of Annabelle but doesn’t work at all for a hero. Thankfully, it feels as if someone watched that piece of garbage and found a way to salvage something out of it by giving Horton the right role to bless us with this terrific performance.

Additionally, Midnighters has a few nice visual touches, such as New Year’s Eve night filtered in a midnight blue (as are many of the rooms inside the couple’s home safe for bright areas like bathrooms). This largely goes away as the sun rises and the rest of the film is spent during New Year’s Day, but it’s clear the filmmakers are actively trying not to make this look amateurish or thrown together. It also has some B-grade cheese to it (I couldn’t stop laughing at a particular scene involving the discovered comeuppance for the aforementioned underwear sniffing).

The most important thing anyone could ever tell someone about Midnighters is simply to just stick with it if they aren’t feeling it during the first act. Ramsay knows what he is doing here, and even if the film only makes obvious observations and doesn’t have the most developed characters over, it’s dirty fun peppered with a gross-out violence, offbeat humor, and funnels the madness their admirable gender politics themes. Midnighters only gets crazier and darker as it goes on, but for the love of everything, someone should re-edit the movie removing the final pointless and illogical swerve.