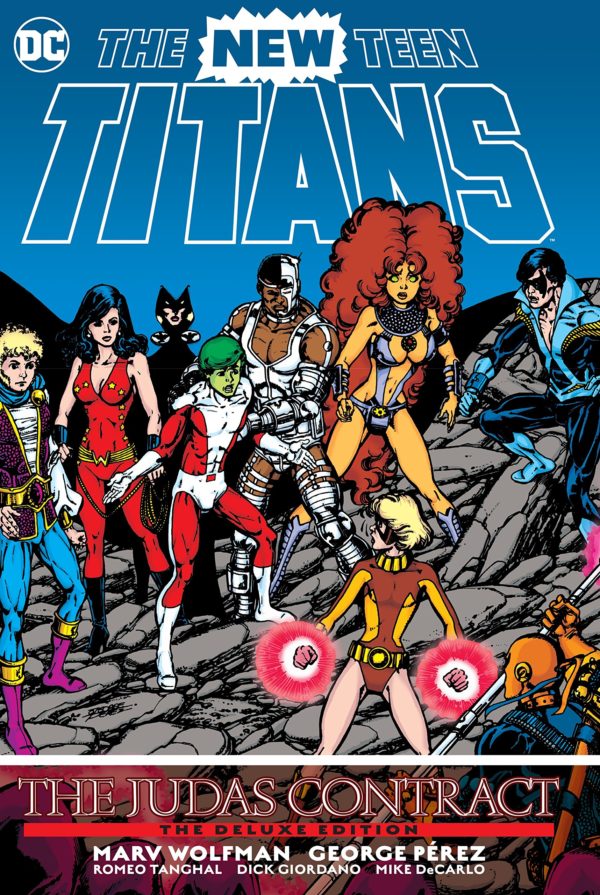 Deathstroke is one of DC’s most fan-favourite villains whose popularity has soared in recent years. Between his appearances in Arrow, the video game Batman: Arkham Origins and the cameo he made in the post-credits scene for Justice League, he’s been popping up a lot. Now fans can go back to the story that established him as a true and dangerous threat for heroes in the DC universe with the newly collected The New Teen Titans: The Judas Contract Deluxe Edition from comic legends Marv Wolfman and George Perez, the fan-favourite story that impacted the Teen Titans for years to come and put Deathstroke on the map as a formidable villain.

This deluxe edition contains Tales of the Teen Titans Annual #3, The New Teen Titans #39 – 40 and Tales of the Teen Titans #41 – 44, collecting the issue where Wally West leaves the Teen Titans and Dick Grayson decides to hang up the Robin mantle, a battle with Brother Blood and The Judas Contract itself. The book has some fairly major shake-ups and status-quo changes for the Titans, not withstanding the team being betrayed by one of their one. Its place in DC mythology is held by how Deathstroke attacks the team and the introduction of Dick Grayson’s own superhero identity, Nightwing. This was the first time I’ve ever read the story in full and its reputation certainly holds up, even if it is a product of its time.

While the story builds off previous events from The New Teen Titans, it doesn’t require much prior knowledge and Wolfman did a good job bringing any new readers up to speed on the Titans’ history with Deathstroke and Terra. Its fairly easy to jump into and is an entertaining story, though the weak point is the story revolving around Brother Blood and his cult. While it adds more to Terra’s relationships with the various Titans and her resentment of them, as well as Dick’s uncertainty regarding his future now that he’s no longer Robin, the story is a bit weak as Blood isn’t an incredibly deep villain and the plot is somewhat predictable. Its also not wholly resolved, but that’s assumedly for issue’s past The Judas Contract. The story is still good, just not as investing as the book’s main draw.

As I said, I’ve never read The Judas Contract before now, though have seen last year’s animated adaptation and have heard about its relevance to DC and Titans mythology. Reading the story itself for the first time, its easy to see why it holds such a significant place for fans. Wolfman crafts a pretty exciting story as the Titans are caught off guard in the worst way imaginable as Terra has been a double agent ever since she joined the team. Working with Deathstroke the Terminator, they attack the team in some unexpected ways in order to hand them over to H.I.V.E., an evil organization that wants to use the Titans’ powers for themselves.

The highlight of the story is, of course, Deathstroke and Terra. Wolfman writes these two very well, making Deathstroke a deadly and intelligent villain and Terra a rather unbalanced antagonist. Deathstroke (who is usually only referred to as ‘the Terminator’) is an intriguing villain here and is made memorable thanks to the depth Wolfman explores. The Judas Contract really captures how deadly and cunning he can be against so many superpowered heroes, but this is also the first story to really delve into Deathstroke;s backstory, revealing how he became one of the world’s top mercenaries and the tragedy of his family. It definitely serves to separate Deathstroke from the likes of Brother Blood, the H.I.V.E. leaders and even Terra, making him a multi-layered and nuanced foe.

While Terra is not as compelling or complex as Deathstroke, she also makes a fairly interesting villain. Having not read the rest of Wolfman and Perez’s Teen Titans run, as well as also knowing the twist for years now, I didn’t feel the level of shock and betrayal that the team (and readers) faced when Terra showed her true colours. Nevertheless, Wolfman writes the team’s shock pretty well and plants some good seeds as to whether or not there is actually some good in Terra. Its never quite fully explained why she hates the Titans so much, though, but Wolfman does make a point to show that she has always let her anger and hatred drown her and that there was never any rational or logic to her hatred of the world; she simply hated because it was easier than opening herself up and dealing with her problems after everything she faced.

Perez’s art is well done throughout the book. While not as refined as today’s art in comics is, Perez still made some great imagery, particularly making his faces quite expressive. The action is also well choreographed, though at times a bit confusing (though that’s mostly in the Brother Blood story). He definitely is able to display how effective Deathstroke is in any situation with one of the standout points being his battle against Dick Grayson. When things get really chaotic in the climax, Perez does a great job of letting the action flow back and forth between all the various characters and their individual moments.

Earlier I said this book was a product of its time. What I mean by that is The Judas Contract has many of the tropes you’d find in a 1980s comic, none sticking more so than how wordy it is with a lot of heavy exposition and thought balloons. At times it almost feels like a novel as Wolfman sometimes employs an omniscient third-person perspective, describing what characters are thinking or doing before they do it. This is both a positive and negative thing; positive because it elevates the book’s narrative and lets you understand a bit more of the characters motivations, but negative because of how much space is filled and how much exposition is used, never really letting the art tell the story. The third chapter of Judas Contract, for example, is essentially an extended flashback to Deathstroke’s history with the tale narrated by his ex-wife.

Despite that negative, The New Teen Titans: The Judas Contract Deluxe Edition is still an entertaining and compelling book, especially for fans who haven’t read it before. This edition also contains two forwards, one from Wolfman and the other from Perez, that explain how the story came together and what their thought process was during and after the story concluded. Its some nice insight into one of the most seminal stories not just for the Teen Titans, but for Deathstroke and DC in general, though it would also have been nice for some extra material such as sketches, designs or pitches to also be collected. Whether you’re a first time reader of the story or are already well-versed in it, this is a good book for you to pick up.