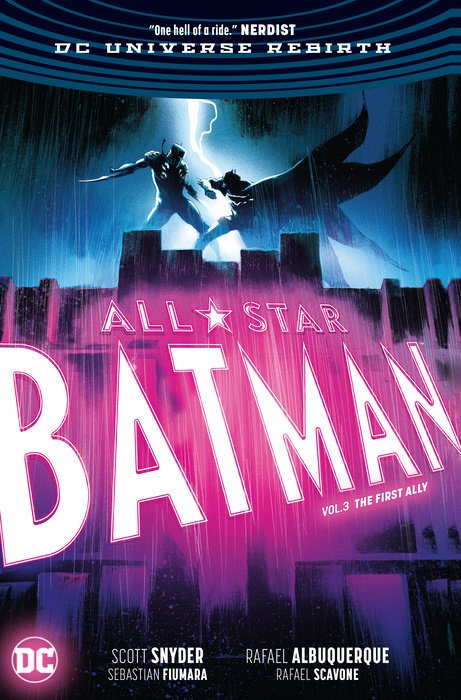 One thing people who are only vaguely aware of Batman most commonly know is the vigilante is often supported by his loyal butler, Alfred Pennyworth. While Alfred has been a significant character in the Batman mythos for over 75 years now, its rare for a story to focus on him or be heard from his point of view. Scott Snyder’s final story arc of All-Star Batman does just that though as a dark time in Alfred’s past comes back to haunt him and Batman in All-Star Batman Vol. 3: The First Ally in a reunion with his American Vampire artist Rafael Albuquerque. The final arc delivers several personable moments for Alfred, examining both his loyalty to Bruce and his own culpability in Batman’s existence.

The story sees Batman and Alfred travelling to Miami to prevent a powerful new weapon getting in the hands of Gotham’s villains, but a deadly enemy that shares some connection to Alfred’s past throws a wrench in their plans to stop the weapons deal. Where the intrigue of the story comes from though is the spotlight Snyder puts on Alfred. The entire story is narrated from Alfred’s point of view with occasional flashbacks to Alfred’s youth and his time as an SAS operative. You really get a great sense of just how capable Alfred is and that there’s more to him than the dapper, respectable butler most people see, but someone who is quite experienced with combat and subterfuge as well.

Snyder also makes a point to examine Alfred’s own role in Batman’s crusade against crime. He always refers to Bruce as ‘my son’ in his narration, highlighting the fact that these two are more than just partners in crimefighting, but also dwells on Alfred’s guilt for encouraging Bruce. Much like Snyder’s earlier story Zero Year, Alfred’s doubts about Batman and his role in participating in the mission rears their head as he wonders if he’s been wrong not to convince Bruce to put the cowl away or just himself pack up and leave Gotham forever. It’s a side to Alfred that we don’t normally see and Snyder does a great job of examining Alfred’s doubts and fears.

It’s also nice to get some backstory on his youth and military experience. This story reveals that Alfred was once a top choice for a secret and somewhat illegal British operation that he ran away from. The relationship between him and this hidden enemy was given a nice amount of depth and it’s an interesting retcon of sorts that expands Alfred’s time in the military. The reveal of the dangerous assassin Batman was fighting against was a little underwhelming, but then again it was the emotional and physical battle Alfred was facing that was rightly given priority.

It’s very nice to see Rafael Albuquerque working on something Snyder-related once again. He makes some very cool visuals, including the cover featured above, that is very compelling. He also uses the fact the action takes place in Miami to great effect by creating some nice scenery that we don’t normally see Batman in: vibrant buildings and yachts, sunny beaches and surrounded by alligators. The same goes for Alfred as Albuquerque places him in the middle of a sandstorm, down below the Tower of London or hanging on to a plane throughout various points of his life. Jordie Bellaire’s colours really add to Albuquerque’s work, offering some very nice hues and contrasts to the imagery. The sunsets look beautiful and the water crystal-blue, even as the beach and water become stained with blood.

The First Ally also contains a series of back-up stories that loosely tie into the main story. Taking place at some point in Batman’s early career, he goes undercover in Russia to stop a shipment of arms from the Russian mafia to their outlet in Gotham, though finds he’s in way over his head against this family and the mafioso’s ambitious and dangerous daughter. Written by Albuquerque, its an interesting story that pits Batman against some formidable foes, though they’re not quite developed enough. That said, Viktoria is a nice foil for Batman, but there are a couple twists that aren’t quite clear. Sebastian Fiumara’s art is good, though, and captures the dark and deadly atmosphere of the Russian mob. It also helps that his style is a bit similar to Albuquerque’s, giving it a decent amount of consistency to the overall book.

All-Star Batman Vol. 3: The First Ally does very well with the examination of Alfred Pennyworth by doing the rare thing and making him an integral part of the story. He is more the main character than Batman is in this tale and The First Ally is better for it. Albuquerque’s art is one of the highlights of the story with its evocative imagery, though his story in the back-ups could have been fleshed out a bit more. Still, Scott Snyder and Albuquerque succeed in giving a nice send off to All-Star Batman.