“I thought that using a visual medium like film to explore what sight is was a fascinating subject matter” explains actor Danny Huston of psychological thriller All I See Is You. Directed and written by Marc Forster (Monster’s Ball, Finding Neverland, The Kite Runner, Quantum of Solace and World War Z), the film centres on Gina (Blake Lively) and husband James (Jason Clarke), who have an almost perfect marriage. Blinded as a child in a near fatal car accident, she constructs a visualisation in her imagination by way of James’s descriptions of the world. This only deepens their passionate relationship, but when doctor Hughes (Danny Huston) performs a corneal transplant restoring Gina’s sight, her new found independence sees a transformation that threatens her once near perfect marriage. 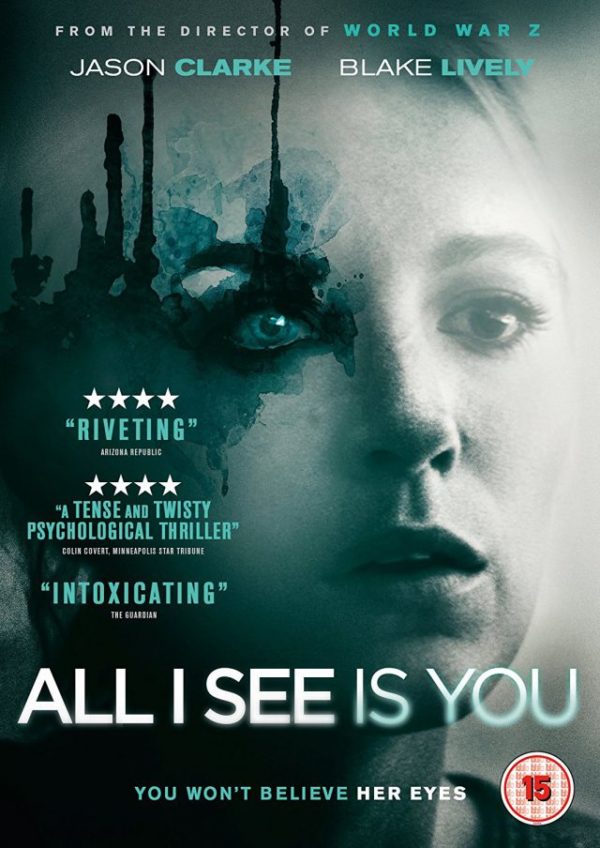 Huston spoke with Flickering Myth about his unintentional career, the guidance of story within the collaborative process and the complexity of the notion of truth.

Why a career in acting? Was there an inspirational or defining moment?

I started as a director and I went to the London International Film School. My first gig so to speak was to direct a title sequence for my father, a film called Under the Volcano, based on Malcolm Lowry’s book. From there I directed my first film (Mister Corbett’s Ghost) in London with a wonderful cast: Paul Scofield and Burgess Meredith, and my father playing a collector of ghosts. I then moved on and made a film called Mr. North based on a Thornton Wilder novel and I really had no intention to act whatsoever.

My father passed away; not only was he a fantastic filmmaker as we all know, but he was also my father and a friend, sort of my buddy. I ended up in LA in a sort of seasonless state and time was passing by. I was trying to get my films made and I reached a point where I was going to a lot of meetings, but waiting for this eternal green light in development hell. Director friends of mine out of the kindness of their hearts started casting me in small roles, and I worked with the likes of Mike Figgis and my friend Bernard Rose. Really it was just a way to be on a film set again and watch the people I admired at work, and to maybe steal something, and figure out how they were getting their films made. But then the roles got bigger and I made a film called Ivansxtc with Bernard, a lead part in an adaptation of Tolstoy’s The Death of Ivan Ilyich, which I got a lot of attention for. Suddenly I was working with the likes of Martin Scorsese and acting opposite Nicole Kidman on a film called Birth, and I had to take it seriously.

Film is a collaborative medium in which the auteur theory could be described as a contradiction. Picking up on your discussion of collaboration and learning from these directors, is film a never-ending journey of education?

Yes, hopefully one is always learning, and in service to story really. I always had a slight problem differentiating a fiction from reality, and one of the first films I saw as a kid was The Bible. My father played the voice of God and also the character of Noah, and really one’s father is a God in a sense, but he truly was [laughs] the voice of God, saying things like: “In the beginning.” And I never met my grandfather, but we would watch films in Ireland and there was always a palaver getting the projector going. The film would always rip and I thought my grandfather was a gold prospector – Walter Huston in The Treasure of the Sierra Madre. So for me it’s in the service of story and my most rewarding collaborations are when we all know the story that we are serving, and we try to tell it the best way that we can, whether it be a fellow actor, the director who is finally the man who holds the vision, or a great screenplay that one’s trying to make work. Or even the way the camera moves to hopefully create some sort of dance with the way the movements and the frame catch you. I like to think that in the way these collections of characters are caught by celluloid and light, and are then projected, hopefully they’re some kind of lasting image, and it’s the same as telling a story by a bonfire or creating shadows on a wall. It’s the story that joins us all and that’s why I love working with my friend Bernard Rose. We’ve done quite a few adaptations of Tolstoy in modern day context, many times just because of budgetary reasons. But we don’t really have to over analyse what we are making because it’s already been authored and written so beautifully, that the story we are telling is clear. There are different ways of achieving that, sometimes more avant garde, sometimes more reckless and other times serving the story more obediently, but finally it’s the story.

What was the appeal of the character and the story when you first read the script for All I See is You?

Well Mark Forster who I have known for quite some time, I remember when he was in LA just starting off, and not unlike myself. I liked that I was in a way the man in charge of the iris and I could make this woman see again, and thematically when she does see, her personality changes and the man she is with prefers her to be blind because that’s the relationship he has. I thought that using a visual medium like film to explore what sight is was a fascinating subject matter, and in the hands of somebody like Mark, I expected and hoped it would be a visual treat. I am sort of the witch doctor or shaman, or doctor who gives the ability for the film to have vision.

When we consider the cinematic storytelling process it is one of smoke and mirrors, details hidden in the shadows amidst a game of cat and mouse. As the unfolding of the narrative allows us to learn, we see things in a different context. So this transformation through sight of Forster’s film synchs with the ontology or the beating heart of storytelling itself.

The iris, the lens and the angle that we choose to see things, how subjective these things are. And what is finally the truth because of how many angles and fragmented memories we have. These are all visual tools that can tell us the truth, but they can also lie and manipulate. What you see is not necessarily what I see, so what is the truth in that rational sense? Even documentaries and photographs have a point of view, and we don’t finally know what the actual truth is, but the storyteller is offering that vision and angle to us. Even in viewing the material, we all bring our own experiences to it and that happens to me when I revisit a wonderful novel that I liked years later, and I see it in a different light.

Film is not in a permanent form, but is shaped by your life experiences and at any given point this changes your response.

All I See is You is now available on DVD and digital download.