Stand-up comedian and actor Dave Johns chatted to Tom Beasley about his new wrestling movie Walk Like a Panther, as well as the lasting impact of his debut movie I, Daniel Blake… 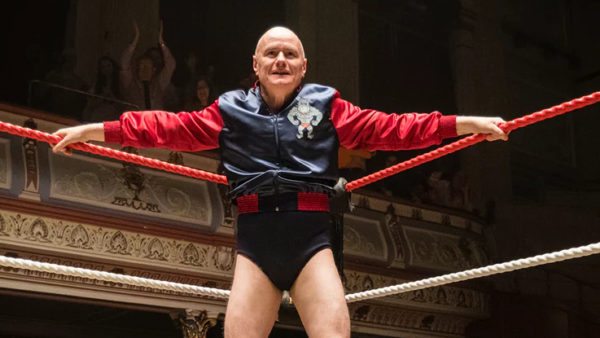 This week heralds the arrival of a rare beast into UK cinemas – a movie about professional wrestling. New comedy Walk Like a Panther takes the “British working class blokes fighting the man” theme of The Full Monty and marries it with the nostalgia-filled world of old school World of Sport wrestling that was popular on TV in the 1960s, 70s and 80s.

At the centre of it all is Dave Johns, of I, Daniel Blake fame, who plays one of the older members of a group of retired wrestlers. They decide to get into the ring again in order to raise the money to save their local pub. Before the film’s premiere on Tuesday, Johns got on the phone to talk about everything Walk Like a Panther.

Walk Like a Panther is coming out this week. Are you excited to have audiences finally see it?

Well, I’m excited to see it myself. I’m gonna see it tonight for the first time at the premiere. I haven’t seen it yet. So that’s quite exciting. I mean, it’s weird to be seeing it in front of 500 people for the first time, but it’s exciting.

Professional wrestling is something that’s very important to me as I’m a big fan, and that’s what this film is centrally about, specifically the British World of Sport era…

What was your experience of that world before you signed on to do the movie?

I used to watch World of Sport with my parents. Everybody used to watch the wrestling when I was a kid. It was a bad thing. I don’t think that young people would realise how many millions of viewers that World of Sport Wrestling got. Even though everyone said it was faked, everyone knew who was winning and they all were playing parts, the guys themselves were pretty fit and pretty tough guys. 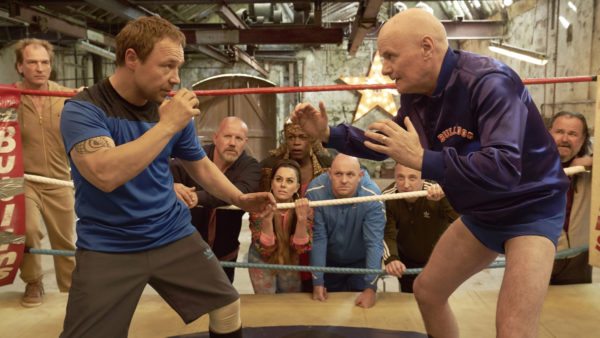 That was my next question actually. What was the training process like?

Well, usually when you do a shoot, you do your scenes and then there’s a lot of sitting about on film sets. You do your scene and you’re waiting for your setup or sitting in your trailer. There was none of that on Walk Like a Panther. When we weren’t on set filming our scenes, we were all in the gym and in the warehouse on crash mats or our mocked-up wrestling ring learning how to be wrestlers. It has to look real, you know, and even though we’re retired wrestlers who have come out of retirement, we have to look as though we still know how to do the moves.

I mean, I’m 62, so learning to be thrown on canvas was quite a big thing. In the morning, it sharp-focused you in.

Did you get chance to look at modern British wrestling, which is perhaps as prominent now as it has been since World of Sport?

What I did was I read a book ages ago, before this film, called ‘The Wrestling’ [by Simon Garfield], which is about the old school wrestling with Mick McManus and Les Kellett and Adrian Street, so that brought back the nostalgia of it. I also love the film The Wrestler with Mickey Rourke. I thought that was so involving, about a guy who, like in any profession, was once a big, big, big entity and is slowly going down the ranks, but can’t give up because it has been his life. There are all of those scenes where he’s at the signings and there’s hardly anybody there. He keeps on going even though it’s ill for his health.

That was the first look I got at the modern era of wrestling, but I’ve seen it on satellite with all of the big showmanship they do in America. It doesn’t have the same love for me that it did when I was a kid when it was just blokes, who just looked like blokes, wrestling each other. I think a lot of young people who go to see this will get a taste of going back to the roots, where all of that wrestling started. I think that’s part of what the joy of the film will be – that nostalgia and also the sense of these guys trying to come back and relive their glory days. 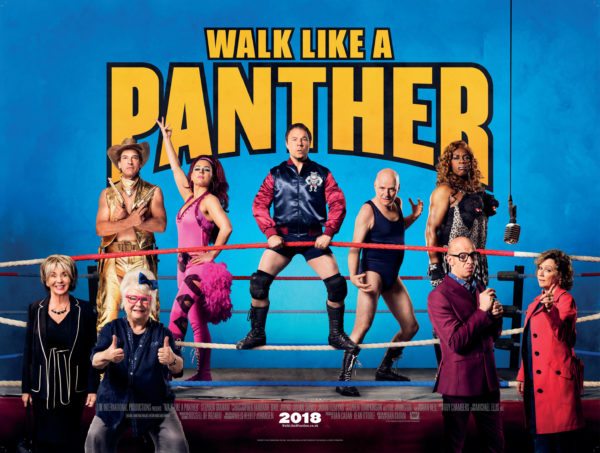 This, in many ways, is very different to I, Daniel Blake…

Yeah, there was no lycra or wrestling in I, Daniel Blake. Only wrestling with an uncaring government.

Absolutely! And the cast of that film was mostly unknown actors, but Walk Like a Panther is packed with the best British acting talent. What was it like to work with people like Stephen Graham?

That’s a good question. I, Daniel Blake was my first film. I’ve been a stand-up comic for 30 years on the circuit and, when I got cast, I didn’t know what I was letting myself in for and how big it was going to get. I just was honoured that I was going to be in a Ken Loach film and I thought, if anything, I’ve got to work with one of the greatest British directors and I don’t know what will happen, but that’s a little legacy that will always be there.

I didn’t realise it was going to have the impact it did and then there was a fallout on my career, where I’m starting to make films now. So I was walking on to the set with somebody like Stephen Graham, who is an absolutely astounding actor, has amazing charisma on screen and knows his way around a film set, and Sue Johnston and Stephen Tompkinson have done a lot of films as well. It was nerve-wracking because I was probably the least experienced in film.

It was a great ensemble. If an ensemble is going to work, it has to work with the people gelling, and we gelled. We got on so well and everyone was so generous. Stephen Graham was great with helping me when I had any doubts, and that’s what it was all about now for me. At the age of 62, I’ve got a new career in film and I’m learning on the job. 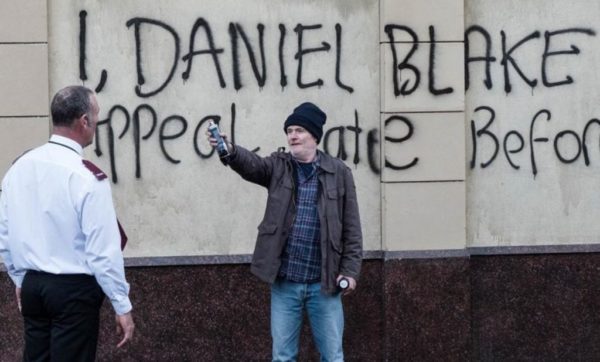 To pick up on I, Daniel Blake, I was watching The Last Leg on TV the other week and Stephen Fry was on. He was talking about this government and he referred to the ‘Daniel Blakes’ of the world when discussing people affected by the cuts. What was it like for you for your first film to become that impactful and become that shorthand?

I was just talking to someone before you rang about how it happens everywhere I go. It’s not just older people; it’s young people, which is really heart-warming. Young people will come up to me and say “I love your film. It made us angry and things should change”. I think what it did was it helped to change the narrative of what the government was saying that all people on benefits are lazy scroungers who don’t want to work.

I, Daniel Blake basically said it’s ordinary people who are in trouble. Dan could be your dad or your uncle and Katie [a single mother played by Hayley Squires] could be your sister. I think that brought it home. There was an honesty in the filmmaking and I think it shocked people, who would think that could be their dad if things went wrong. To have a legacy of that film is something I’m very proud of because people only come up to me and say great things. They say the film was great and should’ve been made and made them cry and made them angry. That’s a great thing to be a part of.

I always said if I never made another film, and the only one I got to make was I, Daniel Blake, then what a legacy and what a piece of work to have. I do think it will be around for a long time and people will always remember it, which is pretty cool. I have this vision of me sitting in an old people’s home and just playing it endlessly on my recording, trying to get all the nurses to come in and see it.

It angered people and it moved people. What more can you want? If you’re an artist, a writer, a comic, a filmmaker or anything, you make a piece of work and all you can say is “here’s what I’ve made”. Then you ask the public to make their mind up and tell us what they feel about it. When it moves someone to that extent, it’s job done, isn’t it? 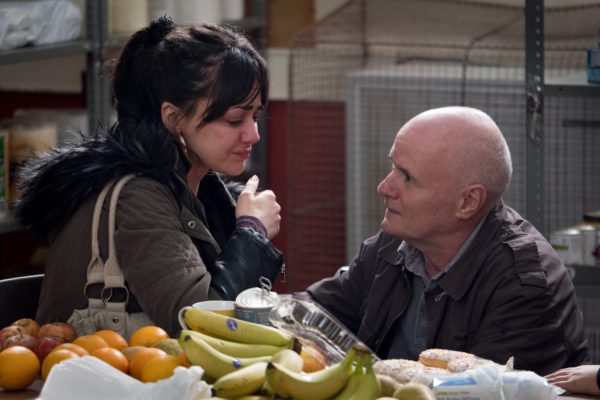 So, just as a final question, you mentioned you have this whole new career making films. What have you got coming up?

I’m hopefully starting filming in May on a new film about Cornish fishermen. It’s another comedy. That’s all I can say about it.

That sounds interesting. Do you have Trautmann as well on the way?

Oh yes, that will be out soon. Trautmann is about the German prisoner of war Bert Trautmann, who didn’t go back to Germany after the war. He stayed in Britain because he fell in love and he ended up playing in goal for Manchester City. The famous thing about that is that he broke his neck in the FA Cup and he played on because they didn’t have substitues in them days, so he thought if he went off they’d be down to 10 men. He stayed on with a broken neck. It’s basically about his life story.

We filmed that in Belfast and Germany with this crazy German director [Marcus H. Rosenmüller]. That’s coming out later in the year, so I’ll be popping up all over the place. It’s weird that you make a film and then, a year later, you forget about it and suddenly people start asking about it. I even forgot about Trautmann, so thanks for reminding me. [laughs]

Well I’ll look forward to seeing you in that, and good luck with Walk Like a Panther!

Dave Johns is appearing in Walk Like a Panther, which is in UK cinemas from 9th March.