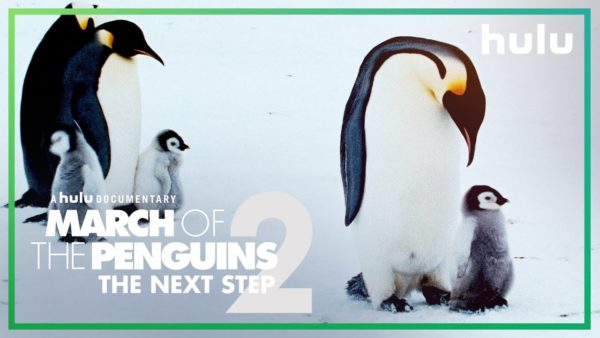 Two penguins, a father and son, face and overcome the almost unimaginable challenges of life in the hostile land of Antarctica.

It’s been over a decade since the release of Luc Jacquet’s March of the Penguins, a groundbreaking look at the lives of emperor penguins during breeding season in the punishing climate of Antarctica, which took home the 2006 Oscar for Best Documentary; since then, the Disneynatue label has explored underwater depths in 2010’s Oceans, the forests of Africa in 2012’s Chimpanzees and plenty more. However, March of the Penguins 2: The Next Step is the first sequel from the production company, bringing the viewer back to familiar territory, and for that reason needs to work extra hard to justify its existence.

Admittedly, March of the Penguins 2 marches on similar grounds as its predecessor, but unexpected is how much that’s part of its appeal. We’ve seen the plight of the emperor penguin before – their long journey from the ocean to breeding grounds to back again, their deep water plunge, their child’s fight for survival – but never quite like this. Jacquet’s reason for returning to the Antarctic has less to do with telling the audience an entirely new story about emperor penguins, and instead is more concerned with using advancements in technology to better capture the beauty and brutality of the inhabitants and landscapes. March of the Penguins 2 is less a sequel, and more an update of the last film, like a new edition of a textbook that has been influenced by a changing outside world.

Using 4k cameras, aerial drones and under-ice diving equipment, Jacquet highlights the stunning beauty of the emperor penguins’ journey and lifecycle, capturing both the penguins’ travels on frozen grounds and their deep-sea dives. The latter of which is especially breathtaking, giving viewers a greater understanding of how the flightless bird transforms from being stiff and clumsy when it is on land to a majestic and agile creature when it is under the surface.

As the title suggests, the narrative does also manage to separate itself from the 2005 original by shining a brighter spotlight on the offspring of the mating emperor penguins, as they slide and waddle into a brand new world, free from the parents who watched over them for months. Their adventure into this world occupies the film’s final twenty minutes and is a perfect example of how this sequel expands on aspects of a penguin’s life that were glossed over or omitted in the previous outing. In fact, The Next Step could have even benefitted from spending more of its runtime on this almost “coming-of-age” story, instead of many moments in the first hour that, while interesting and visually enticing, were already explored in detail in March of the Penguins.

Much like 2005’s March of the Penguins, The Next Step succeeds in exposing nature-obsessed young audiences to animals that seemingly exist worlds away, inhabiting their own corner of the Earth just as we inhabit ours. In many ways, The Next Step may even be more child-friendly than its predecessor, with its focus blurring on the cutthroat nature of each individual penguin’s existence. The original documentary didn’t shy away from showing first-hand how several penguins’ lives were claimed by the cold, exhaustion, predators, etc., using thinly veiled words such as “disappear” to partially shield young audiences from the heartbreak of watching penguins die on-screen. The Next Step isn’t nearly as harsh, although that’s not to say there aren’t some intense moments of survival, including one of an egg transfer from a female to her male partner, a young penguin’s fall into icy water and a run-in with birds.

So much of March of the Penguin’s success can be attributed to narrator Morgan Freeman, so wisely, the filmmakers asked the deep-voiced icon to return for the English version. Needless to say, Freeman’s voice never overbears the action or fades away too far from it, providing a comforting foundation of familiarity and serving as an apt guide through this frozen tundra.

The Next Step is crisper, more confident and undeniably better than its predecessor, filled with ‘wow’ moments aplenty, but having said that it’s also far less important. Opportunities to explore how climate change is shifting ice caps and changing the very surfaces these penguins walk on are mostly squandered. Climate change is mentioned by Freeman every so often and footage shows how its impact greatly affects these animals, but it is merely teased and never warrants a more detailed discussion, as the documentary seems to suggest is worth having.

March of the Penguin 2: The Next Step exists to remind viewers that it’s a privilege to march on the same planet as these adaptable, adorable animals that inherently differ from ourselves. Jacquet effortlessly mines penguin rituals and interactions for naturalistic experiences shared by all beings on this planet, subtly reminding viewers of the ways in which all living things are similar, as well as idiosyncratic and strange. The documentary further demystifies the emperor penguin, its environment and its adventures, and leads the audience through another gorgeous and visceral trip to the Antarctic.

March of the Penguins 2: The Next Step will debut in the United States on March 23rd, exclusively on Hulu.