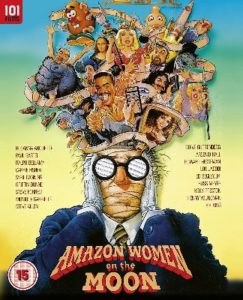 An anthology of comedy shorts and sketches based around the broadcast of a spoof 1950s sci-fi movie. 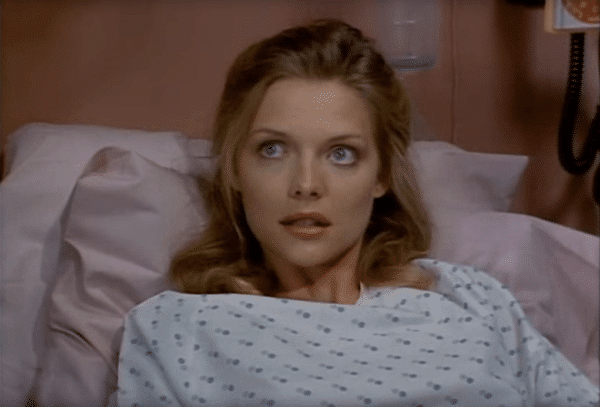 French writer Jean-Baptiste Alphonse Karr once noted that the more things change, the more they stay the same and how right he was because Amazon Women on the Moon, despite being made in the 1980s, is as largely relevant today as it was back then. Yes, the fashions and the technologies change but the sentiment and the ideas that are being parodied remain as funny and sharp as they did 30 years ago, which is quite depressing when you think about it.

Amazon Women on the Moon is the central movie-within-the-movie here, a spot-on send-up of those 1950s sci-fi B-movies where the sets were made up of any household implements the filmmakers could get their hands on – note the office chairs and the bicycle handlebar grips used as controls in the spaceship – that features a three-man-and-one-monkey crew landing on the moon to be seduced by Sybil Danning (Howling II) and her team of sexy handmaidens. However, this movie is shown in several parts as the film reel keeps burning, cracking and unravelling, forcing the faceless TV company broadcasting it to fill the rest of the running time with a selection of sketches and short films from several notable directors for your delectation.

These skits are a varied bunch to say the least, ranging from Arsenio Hall’s electronic gadgets ganging up on him (see? Gadgets and tech going wrong, even back then) in a Frank Spencer-style flurry of slapstick accidents, Ed Begley Jr. hilariously spoofing Universal’s The Invisible Man, Griffin Dunne (An American Werewolf in London) playing a rude doctor to wishy-washy new parents Michelle Pfeiffer (Batman Returns) and Peter Horton (Children of the Corn), Steve Guttenberg (Police Academy) having his whole dating history checked before going out with Rosanna Arquette (Desperately Seeking Susan) and a straight-laced Carrie Fisher (Star Wars) being introduced to the joys of sex, drugs and rock n’ roll in a black-and-white film noir homage. But the funniest parts are the recurring sketches that feature a deadly serious Henry Silva (The Manchurian Candidate) playing himself hosting a TV show called Bullshit or Not which needs to be seen if you’ve ever watched anything on Really or Channel Five just for how accurate it is despite being made several years before those channels came into existence, and also blues legend B.B. King in a public information film declaring that “Every seven minutes, a black person is born in this country without soul”, which leads into several hilarious ads for albums by Don ‘No Soul’ Simmons. Words can’t do it justice – you really need to see it. 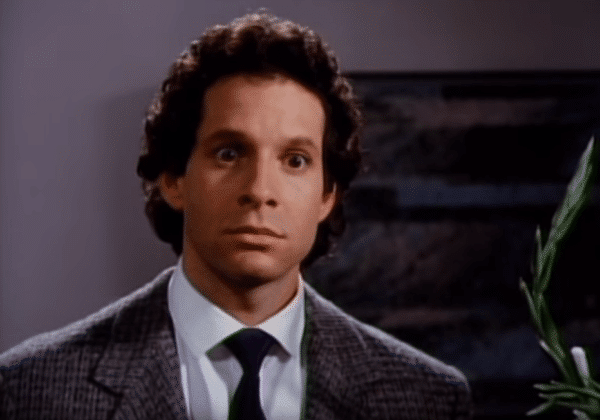 There are plenty of other sections and, like all anthologies and sketch shows, some are better than others but the best thing about Amazon Women on the Moon is that it is never boring, from the opening credits that state the film stars “Loads of Actors” to the closing skit with Carrie Fisher and Paul Bartel it hits the ground running and maintains the same energy level throughout, regardless of how funny that particular sketch may or may not be. As previously stated, many of the sketches ring true nowadays – gadgets going wrong, social commentaries on hippy-dippy parents versus straight-talking doctors, women taking the lead in the dating game, authorities spying on you through your technology, etc – and the humour feels quite fresh despite its age. That said, anybody under the age of 30 watching this for the first time may struggle with some of the references but the humour is a bit broader than in John Landis’ previous pop culture satire The Kentucky Fried Movie which, if you’re so inclined and have the stamina/willpower, does make an excellent companion piece to this.

Coming in a dual format DVD & Blu-ray package featuring a booklet containing interviews with Sybil Danning and composer Ira Newborn, the film also has audio commentaries by co-director Carl Gottlieb, legendary cinematographer Daniel Pearl and Mondo Digital’s Nathaniel Thompson plus a blooper reel and some cut scenes that were best left on the cutting room floor, so it is a good value package if American actors, directors and comedians from the 1980s doing irony and paying tribute to trash cinema long before Tarantino and Rodriguez deemed it cool tickles your pickle and Amazon Women on the Moon has enough laugh-out-loud moments to make it worth putting on to lift any mood.