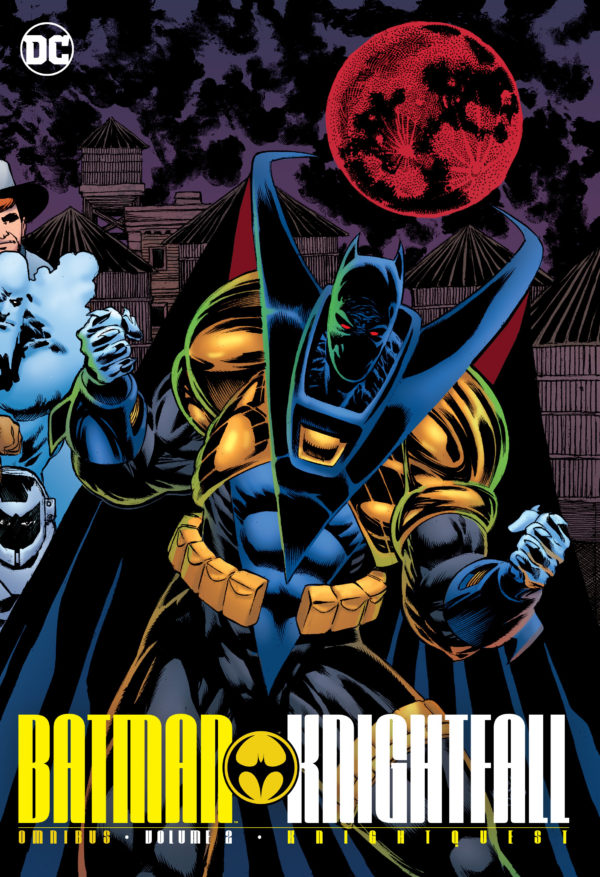 The aftermath of Batman’s confrontation with the supervillain Bane is one of Batman’s most famous eras not only for his broken back, but also because of who took up the mantle of the bat during Bruce’s recovery. Rather than handing it off to Nightwing or Robin, Bruce entrusted the cape and cowl to a relatively new member of their team, Jean-Paul Valley, aka Azrael. Jean-Valley becoming the new Batman was detailed in the first omnibus collection of Knightfall, but now DC has collected even more of the famous story in Batman: Knightfall Omnibus Vol. 2 – Knightquest.

In the second volume of the omnibus series, Azrael’s mental state deteriorates even further as the brainwashing he underwent from the Order of St. Dumas begins to take control again, resulting in him becoming increasingly violent and withdrawn from his allies. Meanwhile, Bruce and Alfred search the globe for a way to heal his broken back so he can become Batman again, a goal that becomes even more imperative once they learn of Azrael’s unbalanced and violent rampage in Gotham.

Coming in at just under 1000 pages, this is a hefty book but also a great omnibus that collects some issues of the Knightfall saga that have not been collected before, namely issues from Legends of the Dark Knight and Justice League Task Force. These omnibuses are becoming the most complete form of the whole story as DC has never collected all the issues before. It definitely expands on the story and helps give a larger picture of how Gotham is changing under Azrael’s protection.

In that light, Azrael’s unraveling is given a great deal of depth in these issues, especially when it comes to a critical choice he has to make over saving a hostage or enacting vengeance on their captor. Azrael’s got some good scenes with some of Gotham’s regular players, from Commissioner Gordon, Catwoman and even The Joker that highlight just how different he’s become. All it takes is a look at Azrael’s fighting style and Joker instantly knows its not his Batman under the mask. There’s some interesting character work at play as Azrael’s violent nature becomes more prominent, though it can often feel a bit repetitive and one-note at times. Bruce and Alfred don’t feature into the story too much as they’re globetrotting, only getting more time in the story towards the end of the book. The omnibus mostly focuses on Azrael’s descent, though some of the material we do get with Bruce is well written as he struggles to find a method of recovery.

The art style varies throughout the book as there’s a ton of artists involved, from Graham Nolan, Mike Manley, Tom Grummett and Ron Wagner. Many of the artists do well with their work and show how imposing and deadly Azrael can be. Though the art varies, their styles remain fairly consistent and are well illustrated throughout the book. The same goes for the writing between Chuck Dixon, Doug Moench, Dennis O’Niel, Alan Grant and Jo Duffy. Its mostly a well written book despite some of that repetition and their characterization of Azrael, and what makes the mantle of the bat so special. Also included are a forward and afterword by Scott Peterson and Grant and a few pieces of variant covers and character designs.

Batman: Knightfall Omnibus Vol. 2 – Knightquest is a great addition for any Bat fan, one that collects much more of the Knightfall saga that any book before. The spotlight on Azrael gives him a fair amount of depth as he descends further into madness, yet still tries to fight it at certain points. Through the art and the writing, as well as the vastness of the stories, this hefty omnibus is a great look at one of Batman’s most memorable periods in comic history.