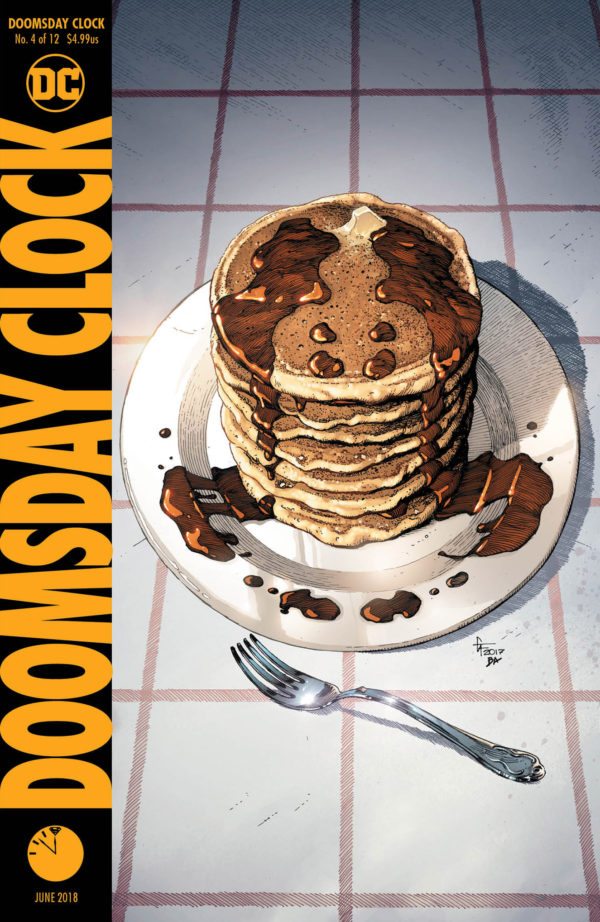 Its been a long couple of months since Doomsday Clock switched to a bi-monthly schedule, but the latest issue of Geoff Johns and Gary Frank’s series has arrived. While Doomsday Clock #4 didn’t contain a whole lot of action or answers to what’s going on in the DC universe, this issue was a great dramatic story where we finally learnt the origin behind the new Rorschach.

After being placed in Arkham Asylum by Batman at the end of the previous issue, Reggie had to gain control of himself before he spiralled back into despair. Much like the chapter in Watchmen that detailed how Walter Kovacs became Rorscach, this issue focused exclusively on Reggie and his past, making him much more endearing by separating him from a simple Rorschach copycat. He’s a much more relatable and tragic figure now that we know who he is and the connection he shares with some original Watchmen characters.

It was a bit of a surprise to learn that Reggie was in fact the son of Rorschach’s psychologist, Malcom Long, (before his reveal I theorized if Malcolm was actually the new Rorschach), but the reveal worked on multiple levels. Its very interesting to see just how much Rorschach affected the Long family, not only by shaking Dr. Long’s faith to the core, but it also broke up his marriage and now his son has taken on the identity. Johns’ use of the Watchmen flashbacks and the few glimpses we got of Reggie’s parents were good in that they didn’t spend too much time rehashing events from the original series, but also still focused more on Reggie and his perspective.

A real surprise, however, was the inclusion of Byron Lewis, one of the original Minutemen who was placed in an asylum after having a mental breakdown. We didn’t learn too much of him from Watchmen aside from joining the team as Mothman and his subsequent mental break (if you discount Darwyn Cooke’s Before Watchmen: Minutmen prequel at least). Johns wrote him well, making him a tragic character, but also genuinely happy in his own way. His relationship with Reggie was a highlight of the issue, becoming a mentor to the up-and-coming vigilante in both skill and life. The bonus content at the end of the issue of Byron’s letters to his sister painted an even more tragic picture of Byron’s life, but were also a good example of someone who is mostly at peace with his life.

Gary Frank’s art is again great throughout the entire issue. One of the reasons I don’t have a problem with the switch to a bi-monthly schedule is because when we get art this good in a series, the wait is totally worth it than to have the artist rush through the whole thing. Doomsday Clock #4 is a great example of how Frank’s body language and facial expressions for his characters tell a story all on their own. If you removed all the speech balloons, it would still tell the story very well. The transition from how traumatized Reggie looks to becoming hardened into Rorschach is one of the best series of panels in the whole issue.

Doomsday Clock #4 may have not given a whole lot of answers to Dr. Manhattan’s goals in the DC universe, but Johns and Frank still delivered quite a dramatic issue that made us feel for Reggie and understand his journey to becoming Rorschach. Frank’s art is worth the price of the comic and Johns’ script is tight and solid, never once feeling slow or lacking emotion. It’ll be a long wait to the next issue, but there’s certainly a lot to look forward to with Johns and Frank delivering another great entry to this series.