Matt Youngberg is an American artist and writer that has been working in the animation industry since the early-2000s, having been involved with shows like Batman Beyond, X-Men: Evolution, and Teen Titans. An avid fan of the original DuckTales series, Youngberg grew up drawing the characters he watched every afternoon on television. 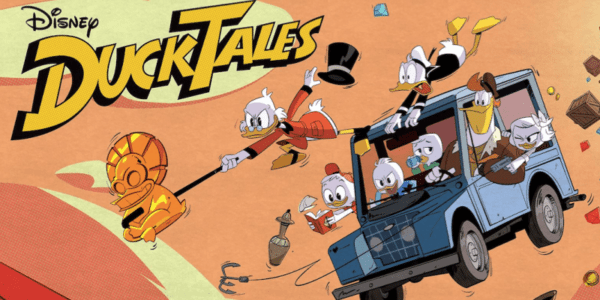 Francisco Angones is a fellow American writer that has also been working in the television and animation industry, albeit since the early 2010s instead, with his credits including Men at Work and the severely underrated Disney XD’s Wander Over Yonder. An uber-fan of the original DuckTales series, Angones sang the theme song in his first grade talent show, incorporated lyrics from the theme song into his wedding vows, and his oldest daughter’s first words were “Woo-oo!”

Having done a myriad of famous animation projects beforehand, the two teamed-up to create the successful reboot of the classic 1980s Disney cartoon DuckTales. Premiering in 2017, the series has gone on to earn acclaim of its own, and was renewed for a second season.

Flickering Myth had the privilege to interview them briefly, and I in turn had the honor to conduct. As I stated, the new DuckTales is both a financial and critical success, managing to acquire positive reviews in its own right. I found this very interesting because reboots in general tend to not to do well among both old and new audiences, and that sentiment has been proven by cartoon remakes like He-Man and the Masters of the Universe (2002), Shaggy & Scooby-Doo Get a Clue! (2006), ThunderCats (2011), and The Powerpuff Girls (2016) lacking the same longevity as their original counterparts.

Because of this trend, I asked Youngberg and Angones why they felt their reimagining had been a hit compared to the aforementioned past attempts by previous showrunners. “As huge fans ourselves, it was about taking what we loved about the original series,” said Angones.

Youngberg continued: “It was really important for us that we retained the feeling that DuckTales gave you as a kid. And it’s a hard formula to master, and we’re still working everyday to master it! But it was vital that we created a show that felt like the original.”

“One of the advantages we have over the other shows is the mass of material. It’s not a complete reboot of the original series: it’s actually taking the totality of the original series, comics, and video games. Every generation had a slightly different version of DuckTales,” finished Angones. 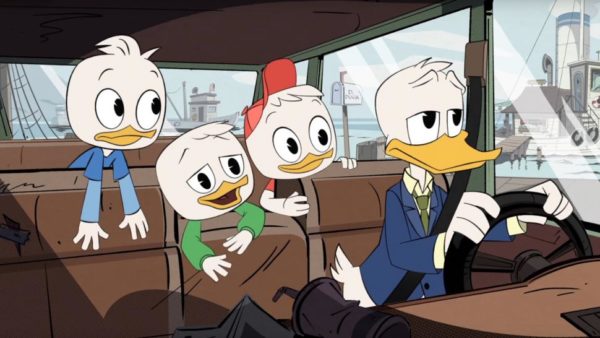 Mr. Angones is absolutely right. DuckTales may have debuted in 1987, but it was predated years before by Dell Comic’s Uncle Scrooge series in the 1950s. The 90s, on the other hand, saw the emergence of the famed DuckTales video games (with the NES one having the iconic Moon Theme!). As someone who grew up with the original and has watched the entire first season of the reboot, I can proudly say that neither of the creators are lying: it truly does honor the series’s roots while being its own thing.

Conceiving something that will appeal to kids and parents of the current generation is a multi-billion dollar field in the world of advertising, but the two DuckTales creators have figured out a way.

“Kids have access to so much more than we had,” stated Angones. “When we were kids, there was only one Disney adventure show on TV and only one way to watch it. Now, children can sit down with their phones and watch the entire series of DuckTales in one weekend. We couldn’t do that. So kids have a different expectation for their entertainment. You have to give them something that they can relate to and that will draw them back.”

Youngberg added that”it was also important to us that we got weird with some of the adventures. If a kid wants to see a family action movie they get to see it every year. We have a thing called the “Mine Cart Rule” where if you’ve seen it a million times before, you don’t do it. At one point the mine cart chase was really awesome and there were shovels and treasures. And then it got old.”

As I said, the new DuckTales is very similar to its predecessor, but it has made some changes to appeal to a larger audience. The one thing that stood out to me personally was the family dynamic being expanded upon. Though I love the original, the characters in it acted more like friends hanging out than a family having adventures together. 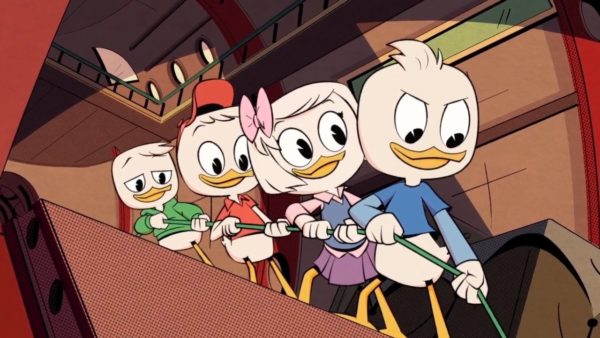 This time around, things were different and I inquired as to why that was deliberately done. Youngberg answered: “The characters have always been the same and they will always stay the same, but the biggest change we made in terms of personalities was of the nephews. What we did was look at families in general and see what dynamic everyone brought. And as we did that their personality came out. And it was partially based off our own family experiences too!”Indeed, as the fourth sibling of nine kids, Youngberg revealed that he drew upon some of his own family memories for the new series, such as when one of his middle brothers brought a briefcase to school instead of a backpack, which has since been written in as a personality quirk for middle duckling Dewey.

Angones also revealed that there were external influences on the characters from both the cast and crew: “I will say the actors have really brought out the personalities. For example, when I heard Ben Schwartz, I actually rewrote the first two episodes to fit his take. Also, the storyboard artists have brought their own personalities into the characters as well.”

Youngberg disclosed the two were adamant on turning Webby into an important part of the show too. “We wanted to make sure she was as much a part of the adventures as the boys were.” No doubt to expand upon the small number of well-written female cartoon characters.

To end the interview, I decided to ask the producers about why the main cast consisted of actors over voice artists. As someone who follows the voice acting industry, including the 2016-2017 strike, I know that one of the problems these performers are facing is the decision by companies to go with celebrities over professionals who have been doing this for a long time, the reason being name recognition. And it’s something that is plaguing the film, television, and video game industries. 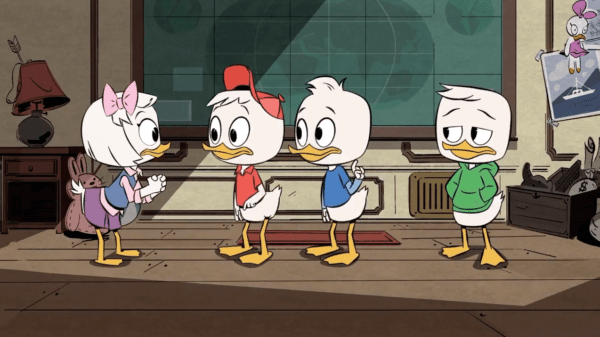 With the famous David Tennant (Scrooge McDuck), Danny Pudi (Huey), and the aforestated Ben Schwartz (Dewey) leading a cast of mostly well-known actors against the lone voice talent Tony Anselmo (Donald Duck), I asked why that decision had been made.

Angones insisted that it had nothing to do with their industry status, but with their background: “We auditioned everybody and we really went through everything. But a lot of common trends that you will find is that everyone in the main cast has a strong theater and improv background, and that proved to be very beneficial. We wanted it to feel like a real family. And when you’re recording things in isolation, we wanted to make sure to have people who felt like they were vibing off of each other. So it’s less about the names and more about people who had that strong improvisation. We’re not trying to push one way or the other, but at least for the core cast that was the focus. It was about getting people who played off each other really well in isolation.”

Youngberg also noted that many guest and recurring characters in the show have been portrayed by actual voice actors, including but not limited to: Keith Ferguson, Jason Marsden, Jennifer Hale, and Robin Atkin Downes. So the two are very understanding about the situation, but just had a specific idea in mind for the primary characters.

Overall, we would like to thank Mr. Youngberg and Mr. Angones for taking the time out of their day to speak with Flickering Myth. It was an absolute thrill to talk with people who have been involved with some of the greatest cartoons of our generation. The DuckTales relaunch is genuinely great and I highly recommend people tune in to see it.

New episodes of DuckTales air every Thursday at 4:30pm on Disney XD