Emma Withington gets hands on with Laser League…

Just what exactly is Laser League? People seem to be enjoying it in Steam early access, but why should you bother? As I entered the Laser League lair, I witnessed the conclusion of a round and thought, ah I’ll just play a couple of rounds, ask some questions and skedaddle. Four hours and an interview later, the ‘just one more round’ itch had to be overcome, before people started to question my existence in the real world. 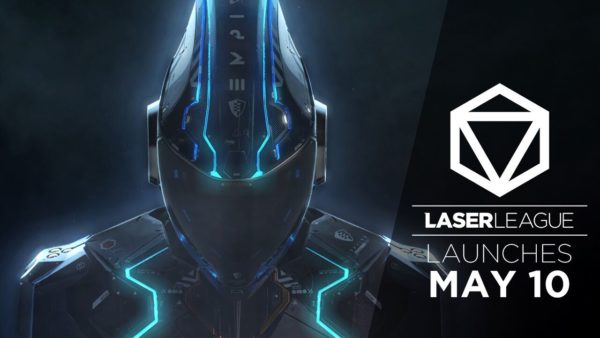 The prototype for Laser League was born while Roll 7 were building OlliOlli 2 and Not a Hero. Simon Bennett, Studio Director at Roll 7, reminisces light-heartedly on the original concept: “We had a prototype called Ultra Neon Tactics – it used to be called ‘Cosmic Ultra Neon Tactics’ as John Ribbins (Creative Director), childishly, thought it would be quite funny to have a game where they could never abbreviate it like PUBG!”

“We basically had it (Ultra Neon Tactics) as this 2D top-down demo – it looked, I guess, a bit like Pong. It was super simple Atari, just graphics with dots on the screen. If you strip down the game to its absolute core mechanic, you turn on lasers in your teams colour and they turn on lasers in theirs; you can run through yours, but you can’t run through theirs and you need to eliminate them.”

So how did something seemingly Pong-esque end up in development? Initially built on by John in his spare time, Laser League became the game they just had to make: “He (John) started going to London Indies, a weekly meet up for independent developers to show each other prototypes. At their Christmas party, everyone went mental for this game – they were playing it really competitively, shouting and screaming! There’re pictures of everyone absolutely loving it and yet it was just such a simple thing. So we said, ‘why don’t we show it at a press day?'” Explained Simon.

“It was the first press showing of OlliOlli 2 and we had this prototype on a crappy monitor at our old studio in Deptford. At the end of the session we said to the journalists, ‘oh, why don’t you have a little go at this?’ All the journalists turned around afterwards and went, ‘OlliOlli 2 is alright, Not a Hero? Still not really sure what it is yet – but you should make this game, this one’s amazing!’ And we were like, ‘shit – OK’. Obviously (those titles) did alright in the end, but thought, maybe that should be the next thing we make?” 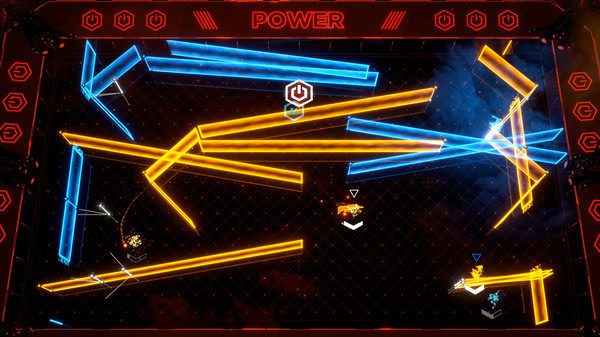 Laser League had serious pulling power and that hasn’t changed. Lifting Laser League from a sideline project and into production had been an unexpected revelation for the team: “We both knew in the back of our minds, if we did a proper analysis of (Laser League) that A – we’ve never made a 3D game before , B – we’ve never done online before, and C – we didn’t really know what the game was beyond these lasers!”

They needed a level of depth for the player to buy into – something to explain exactly what ‘Laser League‘ is, while creating something that you can pick up and play instantaneously: “There’s not a story mode – the lore isn’t seen but implied, as a hook to create what you see now as Laser League. As a studio we wanted to create something immediately accessible with room for mastery and is, above all, fun to play.” 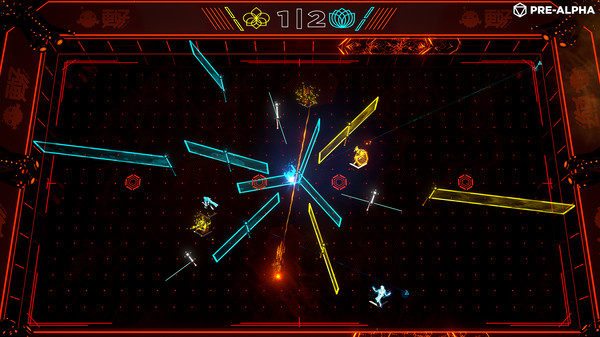 What is Laser League?

Laser League is now set in 2150 and is a new world sport that has, in the words of Simon, “Obliterated football and all other traditional sports.” Laser League retains its basic core premise: avoid being zapped into oblivion by lasers of the opposing team’s colour and generate as many of your own, by dashing through unclaimed nodes that appear – in the hope of drowning the opposition in neon.

With its ideals rooted in gaming’s early years and a two button control system – move and ‘special ability’, you may be fooled into thinking there’s not much longevity to this arcade sports game, but there’s a serious onion to peel here. Much like Tennis you play to the best of 3 sets, however, Laser League comes with the twists and turns of a chess match played at light-speed – it’s frenetic and about as high-octane as you can get. 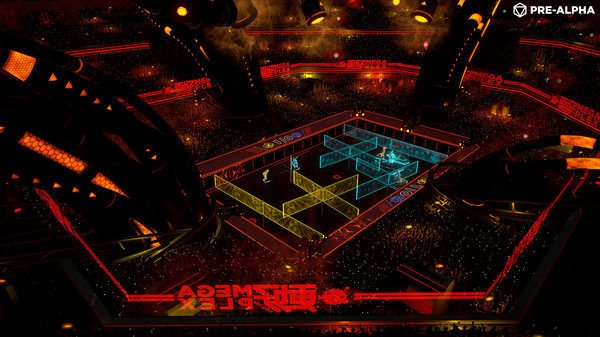 There are myriad tactical intricacies that could be born per round depending on a seemingly small number of factors. Of course, the first thing you need to do is build your team. We were playing 3 v 3 (2 v 2 and 4 v 4 is also available) which is considered the perfect team size and feels more tactical, with the potential for an even balance of classes going forward out of the six available: Blade, Snipe, Smash, Thief, Shock, and Ghost. I favoured Blade right off the bat; an offensive ‘stabby, stabby’ class which possesses the ability to trigger a short, sharp dash attack that will eliminate another player immediately. I’m nice, honest. The other offensive class is Snipe, aka Mr. Line of Sight, which can place a marker creating a line between you and it – if someone runs between the line it immediately eviscerates them.

The other classes act as defensive, support, and utility in a variety of combinations depending on your approach. For example, Ghost has the ability to become invulnerable and can make team revival easier, as it’s often the last class standing, naturally taking on a ‘medic’ role. On the flip side, Ghost can also dabble in subterfuge, by baiting people into lasers; Casper’s not so friendly these days. Shock creates an AOE stun effect that can hold opponents down for Blade or Snipe to finish off, or maybe you could daze someone with Smash. Watch as the opponent ends up flying through one side of the pitch and out the other (think Snake or Pac Man), while a Thief reclaims nodes for your team – creating a spit-roast out of the paralysed opposition.

Top this off with 3 available modifiers to choose from per class, and your team develops further. For example you could add the modifier ‘Hunter’ to Blade allowing speedy regeneration of your ability, or ‘Reflex’ which instantly resets your cool-down after a successful strike – giving you the potential to wipe out the other team in three strikes. When your team loses a round you can reassign yourselves to different classes, change up modifiers and so on to best counter the opponents’ strategy. With the right moves you could create a game-changer in a matter of moments, resulting in rounds lasting from just seconds to over 15 minutes! 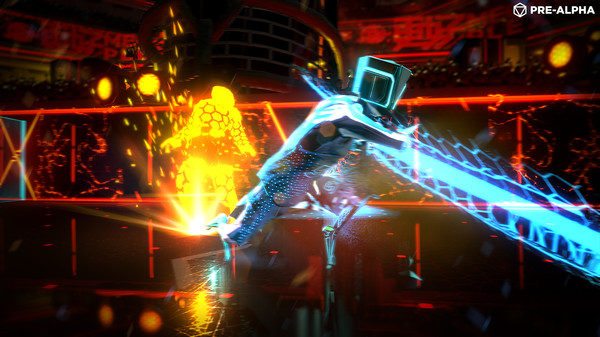 The star of the show is the pattern design. There are four international stadiums – each with their own unique set of patterns – and not only do they get your heart pumping with their changeability, but are intricate and stunning designs to boot. We ended up becoming partial to ‘a bit of Jennifer’ – no, I don’t mean the girl next door, but an appropriaterly capricious pattern. Laser league has everything from end-to-end combat, rotational, and chaotic maps including an homage to Pac Man called ‘Wacca’ – this comes off really well considering you can run through one side of the pitch to the other as giant laser Pac Man patterns traverse around the arena: “The laser maps are essentially like modes, the core rules are the same in all of them, but each map is so different – the aesthetic of the stadium, the music, the colours, give each one a whole different feel!” We’re hoping Jennifer will someday have a male friend, I look forward to possibly playing a bit of ‘Dave’ in the future or ‘Kevin’, which the room was in favour of… 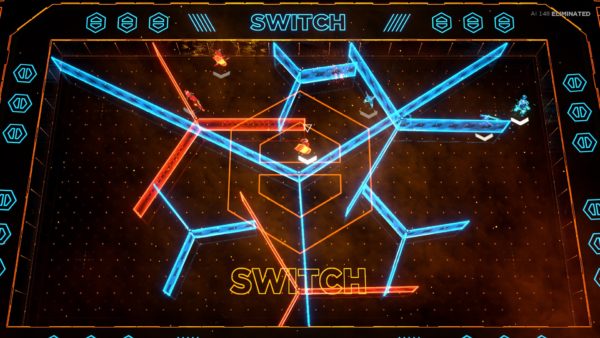 The patterns also bring the scope for mastery forward, as you begin to learn the layout of the maps on top of developing class strategies: “John started building a number of the patterns, working out a framework for what works and sounding out the rules for how you create a pattern. Ultimately the general rule is that you build a pattern to evolve over time and get to what we ended up calling a sort of ‘fuck you’ point where -unless your really skilled – there’s so much going on that if one side possesses most of the lasers on the field it’s game over for their opponents.” We did reach this point multiple times and quickly realised why it was referred to as the ‘fuck you’ point, as the language was about as colourful as the lasers – particularly when you see someone of the opposing team dashing for the ‘Expand’ power-up; which opens up a central node like a flower and can be devastating.

“A lot of the power-ups relate to the lasers, whether they’re turning the lock-down on (locking down the sides of the pitch) or switch, which switches the laser colours over. There are so many different power ups that change how the pattern works so, not only are you building a pattern recognition, but ebb and flow. Learning what power ups do what and when – or when to use them and not to use them is one of the key skills as well. So this layered more and more levels of depth into the player ‘playbook’, as it were.” 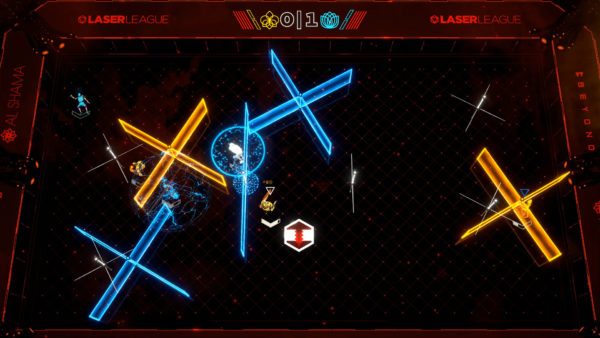 The elephant in the room goes by the name of eSports and seems to follow Laser League around, due to its name and competitive nature. It’s not something that’s been in mind during development for Roll 7: “In a way, by calling it ‘league’ maybe we’ve pigeonholed ourselves into an area – it is a very competitive game, but whether or not it becomes an eSport very much depends on the community. It’s not something you can manufacture,” Simon tells us.

Laser League is an intricately layered learning curve that will go as far as you want to take it, from basic matches with friends to tactical stand offs. Someone who has never touched Laser League will pick it up and begin, very intuitively, to absorb the information and become as invested as the rest of the room in a matter of minutes. We hope to see more from Laser League in the coming months, as it leaves early acces on May 10th, and that it has its time to glow amidst the giants of online multiplayer. If you get a chance to try Laser League hands-on I would strongly recommend it – as one of my fellow players said, ‘It’s hard to let go of something when it feels good’. Profound stuff.

A futuristic sports game which thrusts you straight into the action and magically disintegrates the concept of time, Laser League is here to knock you out of the park.

In Laser League, the exhilarating, high-octane contact sport of 2150, players battle against the opposition for control of nodes that bathe the arena in deadly light. Evading rival colored beams and attempt to fry your opponents with speed, strength and strategy.