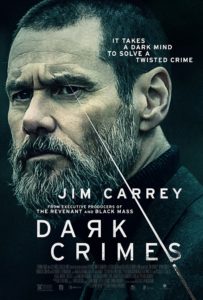 A murder investigation of a slain businessman turns to clues found in an author’s book about an eerily similar crime. Based on the 2008 article “True Crimes – A postmodern murder mystery” by David Grann. 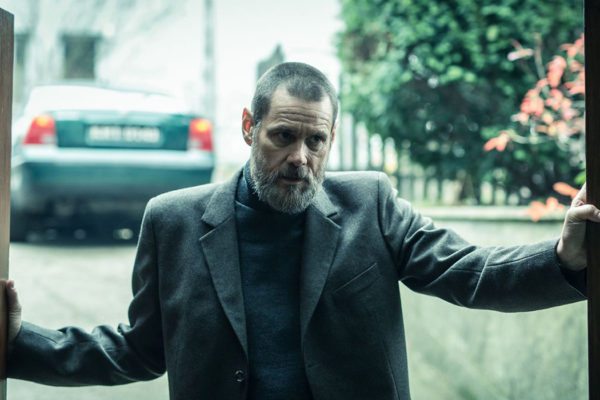 If someone were to tell you that the latest Jim Carrey movie sees him as a Polish police detective investigating an unsolved murder of a VIP (the film isn’t really concerned with details about this apparent businessman) who frequently visited sex dungeons, it would be difficult to blame you for assuming it’s the latest in his line of kooky comedies featuring animated performances built on goofy facial expressions and voice accents. Oddly enough, those typical Jim Carrey tics do exist in this much more quiet and nuanced OCD reminiscent role utilizing the tired “last goody-two-shoes detective left on the force working for a corrupt chief” cliché, but Dark Crimes is a long way from Ace Ventura.

To be fair, Jim Carrey has broken out from silly shenanigans and delivered some outstanding dramatic turns (some of which are actually the best of his entire career), but Dark Crimes (based on an article that solved a similar case from David Grann, and brought to life by director Alexandros Avranas) is a dull and lifeless experience that not even the novelty of the actor cast here wildly against type broodingly obsessing over highly sexually deviant footage, indulging in some of his own BDSM antics in a sequence that if he was still relevant would have resulted in a PR nightmare considering his recent controversy, and putting on a Polish accent can save. One seriously has to ponder if starring in this disaster, which surely had to also come across as a mess in Jeremy Brock’s script was even worth the paycheck or slight attention. 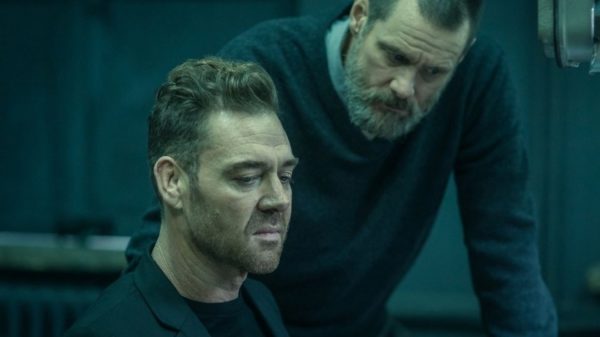 Finding a place to start with everything wrong in Dark Crimes is a daunting task, but for starters, a thriller should, you know, actually be thrilling with a riveting mystery at the center of its narrative. Instead, all we are given to work with are boring tropes; Tadek (Jim Carrey) got caught up in an unfortunate incident that disgraced his reputation moving him back to working on cold cases, it’s his last year before retirement, and he has a family that he neglects a lot. One of the most confounding moments in the film is a segment where his wife, who has little to no character, threatens to leave him if he continues diving further down the rabbit hole of his seedy investigation, landing with a thud and zero emotion. No one will care about them, or even Tadek for that matter because the mystery is actually just window dressing for some truly depraved sexual material to appear on the screen. The opening montage of degrading and physically abusive kink is akin to watching THAT scene of Eyes Wide Shut (a seriously underappreciated final work from Stanley Kubrick) with no substance or point beyond fulfilling some abhorrent fetishistic desires.

Dark Crimes does occasionally find a spark whenever Tadek is interrogating Kozlow, a revered crime fiction author that regularly attends the same club and who has implemented plot points into his novels that strongly tie into the events. Martin Csokas chews the scenery here toying with the laser-focused, no-nonsense Tadek. Charlotte Gainsbourg also has a critical role as his girlfriend getting more to do than anyone in terms of acting range and actual character once the dust settles, but by then it’s too late. It also doesn’t help that Dark Crimes is monochrome and dreary, which is understandable and fine considering the depressing mood and the nature of the violence being displayed, but the mystery itself plays out with barely any intrigue, meaning that these two elements go hand-in-hand essentially as a remedy for insomnia. 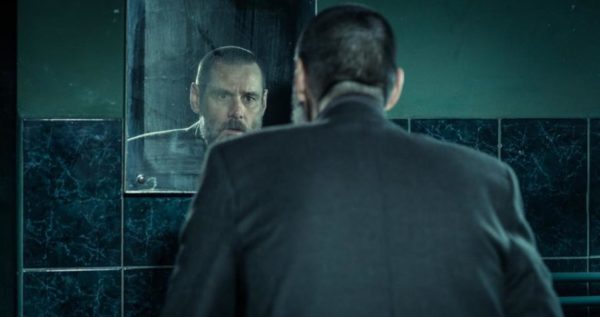 Murder mysteries certainly aren’t obligated to say anything relevant to the world, and it’s absolutely okay to throw up a number of unsavory aspects all in the name of dirty and grimy entertainment, but the key word there is entertainment. Nothing about Dark Crimes is thoughtful, fun, or remotely interesting to watch unfold, and even worse, all of these flaws are further noticeable thanks to wooden acting throughout. Jim Carrey sounds unique with the accent, but it’s not even necessary as the strongest parts of his performance come from his expectedly exceptional facial movements. Dark Crimes is so uninvolved and dead that I honestly wished I was watching another Dumb and Dumber sequel. The darkest crime is that this film actually exists.