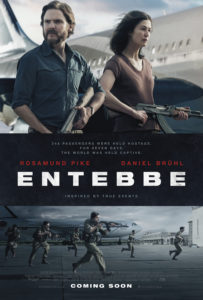 Over 200 passengers on an Air France flight are held hostage over seven days in the summer of 1976.  Nearly half of them are either Israeli or Jewish.  The plane lands at Entebbe in Uganda, then under the rule of Idi Amin, and the Israeli government faces the unpalatable prospect of having to negotiate with terrorists.  Based on real events. 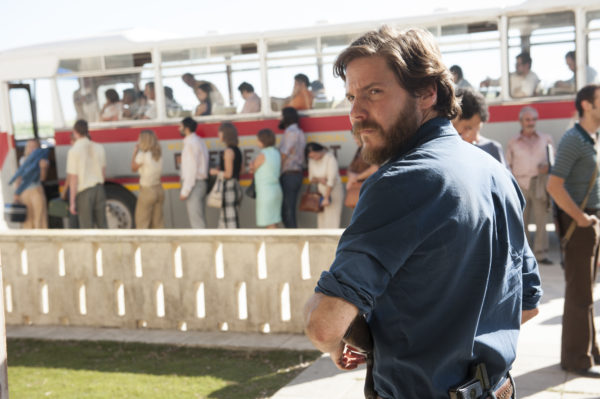 Just after the events surrounding the Entebbe hi-jack of 1976, there was an unseemly rush to capture it on film. The result was no less than three movies.  Two were for TV, both with all-star casts but little else to recommend them.  Victory At Entebbe (1976) boasted Kirk Douglas, Burt Lancaster and Elizabeth Taylor, while Raid On Entebbe (1977) was less glittery with Peter Finch and Charles Bronson.  Inevitably, Cannon Films’ Golan and Globus got in on the act with Operation Thunderbolt (1977), but all three received lukewarm receptions and faded away.

Over forty years later, the story returns.  Director Jose Padilha’s fresh eyes on the subject, plus some historical distance and perspective, must mean that Entebbe is going to be an improvement on its predecessors.  Doesn’t it?  It opens with a series of captions aimed at giving the events some context: Argo started in a similar way, but used animation.  But the big difference is that, while Affleck’s Oscar winner managed to be objective, there’s the distinct impression that Entebbe takes up its position right at the outset and never budges.  With, perhaps, the exception of one scene.  It comes half way through when hi-jacker Wilfried Bose (Daniel Bruhl) confronts the plane’s engineer Jacques (Denis Menochet) by asking him if he’s ever seen the conditions Palestinians have to live in.  It’s the only moment of any genuine insight into the kidnappers’ motives. 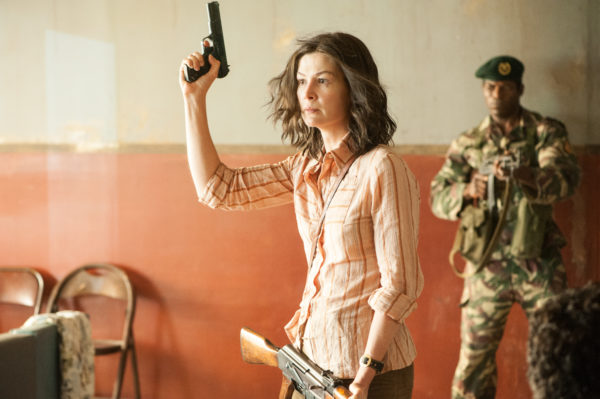 Once those opening captions have done their job, the audience is treated to a stage performance, a mixture of dance and music.  A lengthier version of the same sequence appears at the end of the film and it’s no spoiler to say that it alternates with the Israeli army arriving at Entebbe Airport and putting an end to the siege.  While the music makes a suitably dramatic soundtrack, the dancing is completely superfluous and is just unnecessary padding, contributing nothing to the narrative or the characters.

What the film sorely misses is genuine drama and threat. While there are some fleeting moments with the required tension, there are many more which simply don’t. It’s perplexing. This is an inherently dramatic story, yet Padilha fails to make the most of its potential, so the result is overlong and lacking much in the way of emotional pull or thrills. As the film progresses, it’s not helped by the increasing number of scenes devoted to the machinations of the Israeli government. They need to be there, true, but they pull the plug on any hopes of dramatic tension. Even that most simplistic – but often effective – device, a daily countdown, doesn’t help. 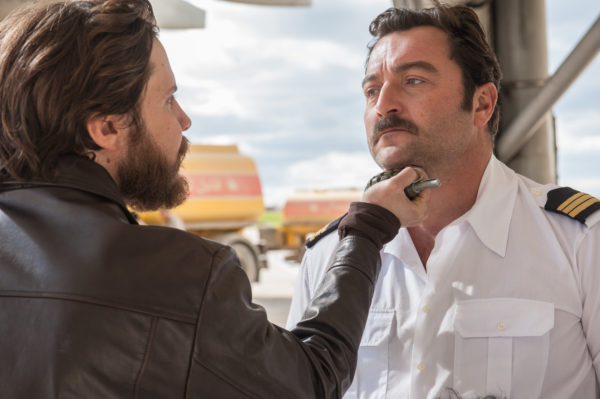 Those that remember the shocking events dominating TV and newspapers at the time (no internet, obviously) will expect to see Idi Amin and they’re not disappointed, but actor Nonso Anozie is no Forrest Whitaker.  He’s such a caricature that the source material for his scenes could easily have been from the pages of Punch, specifically the From Our Ugandan Correspondent column.  There’s very little true menace there.

The earlier comparison with Argo is one which runs throughout the film, but Entebbe comes up short all the way through.  While class acts like Bruhl, Pike and Menochet work hard to convince, their characters aren’t as rounded as they could be, even though both Bruhl and Pike are given backstories.  Forty years on, we’re still waiting for a film that gives an authentic, nerve jangling portrayal of this particular hostage crisis.