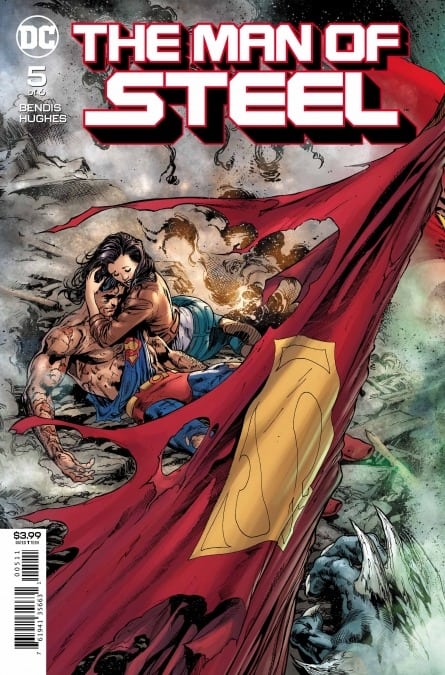 After a nice uptick in the past couple issues, The Man of Steel #5 dips the miniseries down again in quality thanks to some inconsistent writing and artwork. It wasn’t wholly bad, but it definitely kicked the wind out of the sails for the penultimate issue of Brian Michael Bendis’ first Superman story.

Picking up where the previous issue left off, Superman is once again locked in combat with Rogol Zaar in a fight that goes for a few pages. The art throughout this sequence is nice and it’s also a good aspect that Superman and Zaar don’t speak to each other in the void of space, more relying on their facial features and blows to convey their emotions. However, it is somewhat undercut with Bendis’ constant narration from Superman as he thinks about what he knows of Zaar, or rather his lack of knowledge on him from Krytpon’s history.

It is also a bit frustrating that five issues into this series, and this being the penultimate chapter, and we hardly know more about Zaar than we did in the very first issue. He hates Krypton with a passion, wants to cleanse their existence from the entire galaxy and is a great warrior, but that is it. We’ve gotten no depth into his personality or why he feels so strongly about Krypton’s destruction aside from the few brief reasons he gave in Man of Steel #1. As frustrating as this is, it’s at least had the benefit of going by fast since it’s a weekly series, but were this a monthly or even bi-monthly one, the lack of characterization would be even more so.

Bendis’ characterization of others is also out of place in a couple scenes. We’ve seen him use members of the Justice League in small roles before, but this marks the first time the League has come together under his watch. Most are written well, but The Flash comes off very out of character as he uses a silly phrase – “Maybe he’s full of caca poo poo” – in describing how Zaar’s claim could be bogus. It’s as if Bendis is mistaking Barry Allen for Wally West here. The same goes for Cyborg who seems to be a bit dumb-downed than his usual self.

WE also finally get a bit of an answer as to what happened with Jon and Lois as Jon is adamant to taking up Jor-El’s offer to search the galaxy with him to learn things. It kind of keeps Jon in character given how he didn’t see much of Jor-El’s cruel side in The Oz Effect (though Jor-El’s cruelty could have beeb because of Dr. Manhattan), but it still seems strange that Jon would be so willing to leave his parents for who knows how long so quickly. This story beat is still tiresome, though, as we keep getting repeated lines of dialogue and only a little bit of information at a time.

Taking on art duties this issue is Adam Hughes. The fight that takes up the first half of the issue is depicted well with some nice movement from Superman and Zaar as well as Hughes’ colours. Its a good blend of darks accentuated with deep reds to emphasize the hits against Superman. His depiction of Supergirl saving lives in Metropolis and coming to Superman on the moon are also good, particularly when she recovers Superman’s body in a similar manner that’s the reverse of Crisis on Infinite Earths #7. Unfortunately, though, the art makes a huge drop in quality after that with some bland backgrounds and a disappointing lack of detail on the characters. This is especially the case when characters are far away and their faces or just pink blotches with no features at all.

Bendis still has a fairly good handle on Superman, but he’s rather inconsistent with the other characters in his writing and the fact that the story hasn’t progressed that much more, combined with the fact that we still know so little about Rogol Zaar, makes this a disappointing and frustrating issue. Adam Hughes’ art also plays a factor into the disappointment after delivering a good first half with the visuals but then a very noticeable drop in the second half. It’s a shame the writing and art weren’t better considering this is the second final issue of The Man of Steel.