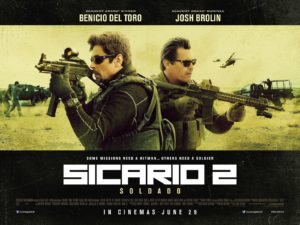 Tasked with causing a turf war to destabilise the cartels, Matt Graver enlists brutal hitman Alejandro to assist him in kidnapping the daughter of a top cartel boss. 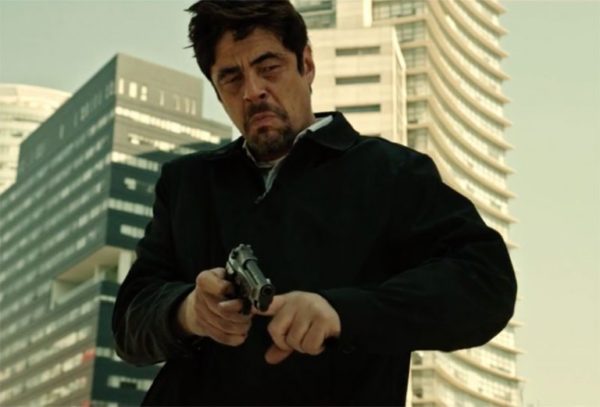 “I’m gonna have to get… dirty,” says Josh Brolin in the first act of Sicario 2: Soldado. The reply, from Matthew Modine’s shady Secretary of Defense, is that “dirty is exactly why you’re here”. It’s an exchange that absolutely sums up this sequel, penned by Taylor Sheridan as a direct follow-up to his brilliant 2015 thriller Sicario, which was an endlessly murky dive into the moral cesspit of the war on drugs. This sequel posits the theory that the cartels actually make more money by trafficking people across the border – a topic that couldn’t possibly be more relevant given President Trump’s latest terrifying twist of the policy knife.

The movie starts in a very similar way to the first film, with a routine border stop turning deadly when a suicide bomber detonates his explosives rather than be taken into custody. Soon after, a series of explosions at a supermarket in Kansas City, Missouri, throws the issue into sharp focus for Modine’s slimy politician, who brings in Matt Graver (Josh Brolin) to agitate the cartels in order to make them more vulnerable. The first act travels all over the map, from Texas to Missouri to Somalia to Djibouti to Bogota to Mexico City, clocking up more Airmiles than a One Direction world tour.

When the plot begins to solidify and a plan is formed, Graver brings in his ruthless comrade Alejandro (Benicio Del Toro) to assist in the kidnapping of Isabela Reyes (Isabela Moner) – daughter of a cartel boss. Isabela’s kidnapping is to be blamed on a rival cartel, sending the crime empires into all-out warfare. When corrupt Mexican police become involved, and the operation is forced out of the dark, CIA boss Cynthia (Catherine Keener) is tasked with cleaning up the mess. 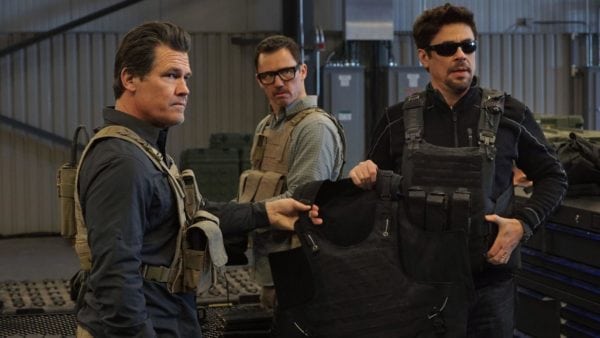 Like any sequel to an only mildly successful film, Soldado has to answer a lot of questions in order to justify its own existence. For the most part, it manages to do so, with incoming director Stefano Sollima holding his own in a world originally crafted by the dream team of Denis Villeneuve and Roger Deakins. The visual style is admirably gritty, with moments of explosive brutality that are every bit as shocking as the memorably grim dinner table climax of Villeneuve’s film.

There has, however, been a clear step down in terms of story and character. First time around, the audience was ushered into the world through the perspective of Emily Blunt’s character, who constantly had the wool pulled over her eyes, in turn obscuring crucial plot from the audience. That feel of questionable morals is entirely absent from Soldado, which spells out Graver’s plan from the first moments and allows it to play out without any real surprises. The audience is never really in the dark and the characters never develop beyond their starting point, in stark contrast to Blunt’s evolution.

Without the character focus, Sicario 2 is more of a “dudes with guns” movie. Fortunately, it’s a very good one, with an enjoyably labyrinthine plot and solid performances from Brolin and Del Toro, as well as a scene-stealing turn from Moner as the cartel daughter who becomes a lot more than the scrapping schoolgirl cliché she is introduced as in her first scene. Moner and Del Toro form a relationship reminiscent of the protagonists in Logan, though the script never allows that bond to deepen in the way that it should. 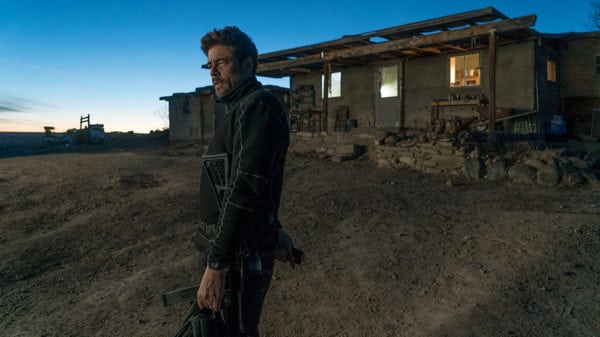 In fact, this movie seems far more interested in an entirely different goal in its final moments. The first Sicario film was clearly made without any notion of producing a sequel. It was a stand-alone story in every way, exactly like Sheridan’s other stories – Hell or High Water and Wind River. This is not true of Soldado, which has an obvious eye on a third film – especially in the final act, which culminates in a tease so egregious that, as the credits roll, the audience’s eyes are likely to be rolling too.

With that said, Sicario 2 is only a disappointment in comparison to the excellence that came before it. Taken on its own merits, Sheridan has crafted another knotty thriller that has the power to shock its audience with moments of violence, featuring characters who are deliberately impossible to like. Sollima steps into the enormous shoes of Villeneuve with an impressive eye for a set piece and a pleasing mean streak, even if he can’t ever match up to the intense character study that preceded his work. This isn’t just Sicario any more; it’s the ‘Sicario Saga’, and that comes with a whole different set of priorities.