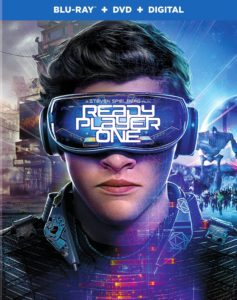 Steven Spielberg returns to sci-fi with Ready Player One, an adaptation of the book of the same name by Ernest Cline that is chalk full of references to pop culture, 80s films and video games old and new alike. In my original review for the film, I wasn’t too kind to it because of how much it differed from and diluted the source material. Some time and distance has somewhat softened my view of the film, though where Ready Player One‘s home release really succeeds is in some extensive behind the scenes features that go a great amount of depth into the film’s complicated and at times groundbreaking production.

Ready Player One follows a gamer named Wade Watts, aka Parzival, on his quest to find an Easter Egg in the OASIS, a massive online experience used worldwide for a variety of things. Finding the Egg will give him control of the OASIS and a vast fortune and when he discovers the first clue to the long sought-after item, he’s targeted by an evil corporation that wants to exploit the OASIS for their own gain and its up to him and his friends to stop them.

The film follows the basic structure of the book, though very loosely adapts the story. There is a lot that fans of the book will miss out on, such as the reasons why people have such a bad state of living or why the OASIS is more important than just a gaming experience. Where the film really suffers, however, is in the characters as their arcs are so condensed it doesn’t give them a whole lot of time to breathe and flesh them out. Parzival and Art3mis’ romance, for instance, feels so rushed that you don’t really buy into their relationship or how quickly they fall for each other. Art3mis especially suffers in this case as she’s a less interesting and independent character than she is in the book.

The cast does make up for some of the story’s shortcomings as Tye Sheridan, Olivia Cooke and Lena Waithe have great chemistry with each other and Ben Mendelsohn is as snobby a villain as you expect him to be. It’s also a fairly entertaining film. This being my first rewatch since theatres, I appreciated more how Spielberg constructed the set pieces, from the massive car race to The Shining sequence to the climactic final battle. The amount of references to games and pop culture, from Halo, Teenage Mutant Ninja Turtles, Batman: Arkham Knight and, of course, The Iron Giant are too many to name and spot, but fans will have a fun time seeing these various elements pop up and go on their own Easter Egg hunt to see what exactly Spielberg included.

For fans of the film or just enjoy peaking behind the curtain, that’s where the real worth in this blu-ray lies. Watching the special features, my appreciation for the work that went into this film grew enough for me to like it a bit more. The features are entertaining to watch and very informative as Spielberg, Cline, the cast and many members of the crew speak out on what influenced them in the making of Ready Player One. The features are:

The 80s have a huge influence on the book and Ernest Cline speaks about why that was such a seminal decade for him and pop culture. He discusses why he chose that decade to play a part of Ready Player One and we also hear from various other members of the crew on why the 80s was so important to them and what they did for audiences to feel that influence in the film.

This is the most extensive feature the blu-ray has to offer. A 1 hour documentary that covers the film’s production, from the early days of Cline writing the novel to what attracted Spielberg to the project and the making of the film through the motion-capture stage to the live-action segments. This goes very in-depth into the film’s production and one of the most interesting aspects comes from costume designer Kasia Walicka-Maimone on how she designed the real-world costumes, adapted 80s style and what the characters would wear in the OASIS. There’s also a very cool look at how they recreated the Overlook Hotel for The Shining sequence. Spielberg’s enthusiasm and energy for filming this, and learning new techniques with the mo-cap technology, is on full display throughout this documentary. He describes filming the OASIS scenes and the real-world settings as like two completely different films and you definitely get that sense here. 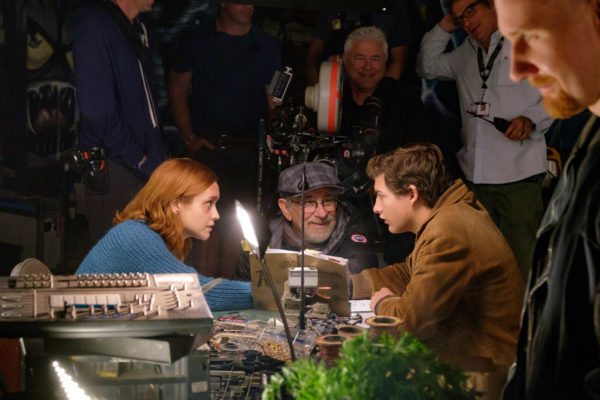 An extended look at how the visual effects were created. It goes in-depth into how they created the look for the film, showing plenty of pre-viz work to their final look in the film. They also reveal they created all the OASIS sets digitally through virtual reality where Spielberg and others could actually walk around and view the digital area so the cast could know the type of surroundings the characters were in. It also goes into how they blended real world scenes with the OASIS scenes, such as Parzival’s real world hologram in Sorrento’s office to Wade’s first entry into the OASIS.

Level Up: Sound of the Future (8 min)

Looking at the film’s sound design, you see the level of work that went into all the various sounds for the film. Sound designer Gary Rydstrom discusses his influences in creating the sounds while trying to make sounds in the OASIS futuristic yet still retaining a real-world quality. He also discusses Lena Waithe’s deep voice as Aech and how he accomplished deepening Waithe’s voice without losing her distinct personality.

Spielberg says John Williams wasn’t available for Ready Player One, so he went to who he thought was the next best thing with Alan Silvestri, a composer who has worked indirectly with Spielberg multiple times on films Spielberg has produced, mostly through his directing protege Robert Zemeckis. It’s an informative feature on the musical style of the film and how he worked on each character’s theme and the fantastical nature of the OASIS.

Ready Player One author Ernest Cline and the film’s star Tye Sheridan sit down to discuss the making of the film. Cline talks about the whrilwind of the film getting greenlit with Steven Spielberg directing and other aspect of the production. The pair talk about and later go on a drive in Cline’s personal decked out DeLorean. They have very nice chemistry with each other and its easy to see why Cline thought Sheridan was a good choice for Parzival. They also discuss Speilberg’s childlike enthusiasm on set while Sheridan quizzes Cline on his 80s film knowledge. Its a fun feature that also gives a bit of a tease for Cline’s follow up novel, Ready Player Two.

While the film of Ready Player One doesn’t satisfy me as a fan of the book, my appreciation for it has gone up a bit on the rewatch and thanks to the very insightful and entertaining collection of special features that clocks in at over an hour and a half. Film fans will get a kick out the extensive look of the film’s production and the other fun bits the features offer. The blu-ray is a worthwhile purchase for fans of the film and Spielberg.