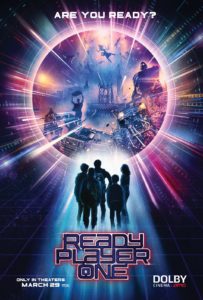 With filmed adaptations of books, it can be hard to judge and separate from the source material. I recently finished Ernest Cline’s Ready Player One and loved the book, so I was excited to see the film made by the legendary and visionary Steven Spielberg. It’s to my disappointment, however, that I’m split on the film. On the one hand, Ready Player One is an entertaining movie that somewhat captures the essence of Cline’s novel. On the other, though, this is such a loose adaptation that doesn’t convey the depth of the characters, story or the world, both the OASIS and the real, that Cline managed in his debut novel.

The premise is fairly simple and follows the book enough: a world famous video game designer and inventor of a massively successful virtual reality system called the OASIS passes away, but leaves a video revealing he’s hidden an Easter Egg somewhere in the OASIS. To earn it, players have to go through a series of difficult challenges and the player who wins gains control of the OASIS and his entire fortune. It’s Willy Wonka meets The Matrix in a story filled to the brim with video game and pop culture references that fans of just about any genre will enjoy.

From there, the film loosely follows the plot of the novel. Tye Sheridan plays Wade Watts, aka Parzival, as he discovers the clue to the first challenge and works with some of his friends to complete the quest before a company who wishes to control the OASIS and use it for their own profits beats them to it. Sheridan makes a fairly good lead as Wade, coming across as a relatable underdog who is easy to root for. In fact, most of the cast does well in their roles. Olivia Cooke’s Art3mis is also easy to root for, having a good sense of comedic timing and good enough, but not perfect, chemistry with Sheridan. It should come as no surprise Ben Mendelsohn makes for a great, sleazy villain who chews up every scene he’s in without coming across as too hammy and Lena Waithe’s Aech is also memorable. Unfortunately for Win Moraski and Philip Zhao, neither of them are in the film as much as the other supporting cast, though they do get one or two memorable scenes.

Where Ready Player One fails is in the story. The film not only condenses much of the story, but changes nearly everything about it. Most of the challenges OASIS players have to complete greatly differ from the book in an effort to be more cinematic. This way audiences can enjoy them more and they could get some more pop culture references in. Some of those changes work, but they also dilute the complexity of the challenges and how much work players put into them. It doesn’t help either that the events of the book, which took place over the course of months, transpire in a matter of days, making everything feel very rushed and condensed. One example of this is with Parzival and Art3mis’ relationship. I said before Sheridan and Cooke have some chemistry with each other, but their relationship doesn’t feel real or fleshed out because he trusts and declares his love for her so soon after meeting her in the film that it seems somewhat empty. His declaration of love and everything else between them lacks emotional strength since it happens so fast. Because of this condensation, many of the character’s arcs, Parzival’s especially, seem more like checking off boxes than evolutionary steps in their journeys.

The world of Ready Player One also suffers from this. The OASIS doesn’t seem nearly as important in the film as it does in the original story. Whereas Cline’s novel showed that the OASIS was something used by everyone for a variety of things, such as going to school within the OASIS or companies mostly conducting business there, the film makes it seem like its primary purpose is for gamers young and old. The significance of what exactly is at stake is never fully explored, instead seeming like just an evil tech company looking to exploit gamers. Granted, that is what’s at stake in the book, but the film doesn’t explore the implications of why non-gamers should be worried too. The state of the real world is barely hinted at as well, leaving some questions as to why people live in stacks of trailers, in tent towns or work for such a bad company.

Despite the flaws with the story and characters, Spielberg does make Ready Player One a fairly enjoyable film to watch. Genre fans will have fun finding a lot of the references in the film, both the ones that are shown and spoken to the ones that are hidden. Within this film we get references to Batman, Halo, Street Fighter, Final Fantasy, Teenage Mutant Ninja Turtles, The Iron Giant and many, many more. Listing them all would take a whole other article in itself. Spielberg’s eye for action is as sharp as ever, creating some visually stunning set pieces that combines both the animated look of the OASIS and live-action environments. Suffice it to say that there is definitely a lot of fun to be had that still touches on the theme of Cline’s novel, of how we shouldn’t entrap ourselves in technological spheres and remember the importance of physical contact, even if it doesn’t do it as strongly.

In the end, Ready Player One is a film I’m left torn over. Its entertaining and geek-ridden, but loses so much of its heart in doing so. The film feels too rushed and condensed to fully enjoy with the characters lacking a complete journey. The cast does well with what they have, but the supporting characters suffer the most as they lack enough personality to help them stand apart. Spielberg’s latest is enjoyable enough, but fans of the book may walk away disappointed.