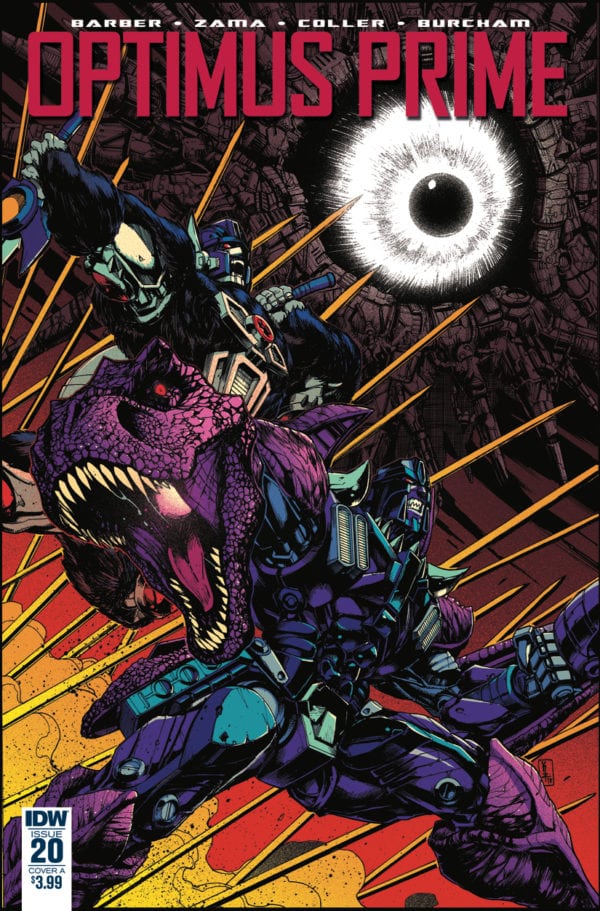 The fight for Cybertron rages on as Shockwave implements his plan while Optimus Prime finds a surprising bot in limbo. As the penultimate issue of ‘The Falling’, John Barber sets a good stage for the finale as Shockwave prepares his final move. It is actually a fairly quiet issue as the pieces are put in place and the characters, particularly Optimus and Bumblebee, are given some fresh examination.

The biggest aspect to come out of the issue is the lengthy conversation between Optimus and Bumblebee as the Autobots are reunited. The fan-favourite bot has been ‘dead’ since Dark Cybertron, though he’s appeared as a ghost/projection/hallucination to Starscream ever since with a couple hints that he may actually be alive somewhere. Now we know he’s just been stuck some sort of limbo after being dragged through Shockwave’s blackhole. The reunion between Optimus and Bumblebee is great as they naturally renew their previous camaraderie and Optimus catches Bee up on everything he’s missed.

Barber uses the opportunity to examine Optimus’ current state of mind rather well, focusing on his ‘failure’ to unite Cybertron and Earth and keep both species safe. It humanizes him further as a leader trying to do what’s right while living up to the image many bots hold him to, including Bumblebee. The issue also examines Bumblebee’s character too as it reminds readers about his leadership of Cybertron in the first part of Barber’s Transformers: Robots in Disguise and he couldn’t unify a divided people either. The parallels between Optimus and Bumblebee’s journey isn’t lost in the story, but reinforces how much alike these two are.

There’s a fair bit of action here too as Arcee takes on a bunch of Maximals – cleverly named after Shockwave’s underling Liege Maximo. The issue’s cover blatantly boasts the inclusion of Beast Wars‘ Optimus Primal and Megatron, though neither feature too much as they have a quick fight with Arcee before capturing her. It’s still great to see them utilized and Kei Zama draws them well, particularly Primal as he gets a nice and fearsome close-up. The action is sometimes a little hard to follow in one or two panels, and the other fight between Victarion and Devastor still rages on with only a few punches traded between them in this issue, but overall its presented well. As little action as we do get here, Barber wisely spends most of the time examining Optimus, Bee and even Starscream.

Zama’s art is well done throughout the issue. There’s some nice detail she puts in, such as the gorilla hair on Primal’s arms and legs, and her facial expressions are nice as well. Apart from that close-up on Primal, Liego Maximo looks great and the Bee’s expressions convey the emotion behind meeting Optimus again well. They latter half of the issue is done by Casey Coller and he matches Zama’s style well enough and also does some nice facial work on the characters while Josh Burcham’s colours compliment both artist’s styles, giving the issue a vibrant look.

Transformers: Optimus Prime #20 is a nice issue that spends its time on interesting examinations of its title character and Bumblebee, reminding readers why these two bots often make a great team. Its nice to finally have Bee back in a proper form and Barber writes the little guy well. The art from Zama and Coller helps those character moments standout even more with the detail they put in. It is a very good and thought-provoking penultimate issue before the big finale of this storyline later this week.