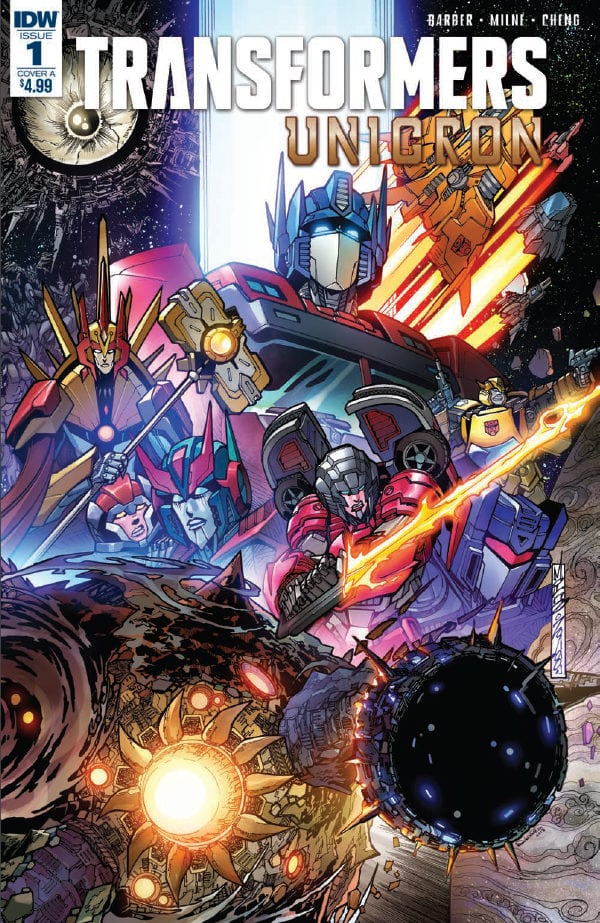 Throughout the many iterations of the Transformers franchise, the biggest bad of the mythos has not been Megatron, Galvatron or an ancient Prime, but the massive planet-eater Unicron, who is often played as the Devil to Cybertron’s God. For the decades-plus that IDW has maintained Transformers in comics, they’ve never touched or even hinted at the chaos bringer, but that changes now with Transformers: Unicron #1, marking the beginning of the end of IDW’s current Transformers continuity.

Just a quick note before continuing: Due to shipment and delays, Unicron #1 slightly spoils the ending of ‘The Falling’ arc in Optimus Prime #21 and its aftermath, the former of which comes out later this week. It’s not enough of a spoiler to detract from this issue or the ending of Optimus Prime #21, but just so you won’t be caught off guard by a couple seemingly out of the blue appearances.

Unicron #1 begins with Optimus, Bumblee, Arcee and a host of Autobots and Decepticons leading an attack against Unicron and his Maximal army while their allies evacuate the Cybertronian colony Caminus. It’s a pretty action packed issue as the Autobot/Decepticon forces battle a host of enemies, giving you very little time to collect yourself until the final few pages of the issue. John Barber depicts a very desperate battle and shows how Unicron, as well as the Maximals, are a dire threat they haven’t faced in a very long time.

The only detraction regarding the story is that it plays very similarly to the Free Comic Book Day issue of Transformers: Unicron #0 where Unicron attacks and successfully devours a planet while its defenders are forced to retreat. The big difference here which gives the first issue a leg up is the inclusion of many of the major players that include Optimus, the Mistress, Acree and even Starscream and Shockwave. Barber balances all the characters pretty well by giving them equal time with their different priorities, bouncing back and forth to Optimus’ plan of attack and the Mistress’ evacuation. Barber also takes the opportunity to examine Optimus’ shifting beliefs in the old legends of Cybertron’s history and the doubt he feels against such an ancient and powerful foe.

Transformers veteran artist Alex Milne takes on the art duties for this introductory issue and this features some of the most gorgeous art in a Transformers book. One of the most memorable parts of the issue is an opening splash page with Unciron and has amassed army descending on Optimus’ forces. The action Milne depicts is chaotic, but very detailed as the various bots battle. There is a lot to pour over, from the various cameos of Beast Wars characters and other Autobots and Decepictons, the action taking place in the background or the detail in Unicron’s interior. Milne’s makes the boom great with some vibrant colours from Sebastian Cheng that make the visuals pop off the page.

Transformers: Unicron #1 is a great start to IDW’s big Transformers event with stellar art and some interesting examination of Optimus Prime’s beliefs. Many Transformers fans should enjoy Barber’s introduction to the biggest bad the franchise has. Hopefully this event will be a worthy conclusion to this iteration of IDW’s Transformers comics.