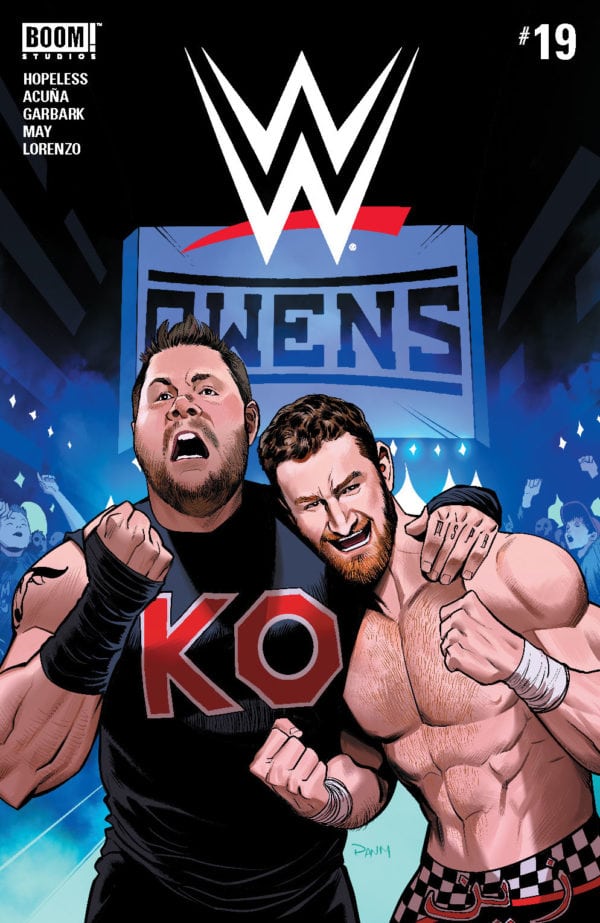 This month’s edition of WWE comics from Boom! Studios shifts its focus away from the women’s revolution and onto the ongoing relationship between Kevin Owens and Sami Zayn.

Like the women’s revolution (which I would have liked to have seen a few more issues of, personally) there is plenty of history to explore with the relationship between Owens and Zayn and hopefully, the writers take the opportunity to exploit that.

The first issue focused on the pair tells the story of Sami Zayn’s heel turn at Hell in a Cell 2017 and the following weeks on SmackDown following up to Survivor Series. In the initial aftermath of Zayn’s turn, we see Zayn being rejected by the rest of the SmackDown locker room, and his struggle to understand why no-one is supporting him. This is juxtaposed excellently by Owens’ arrogant persona. Owens is convinced that if everyone is out to get them, then they may as well be the bad guys everybody believes they are.

This difference in opinion leads to really nice exchanges between the two, and the dialogue from Dennis Hopeless is up to its usual high standard. Zayn’s slow turn to the dark side is perfectly executed and the story once again does a great job of mixing kayfabe with reality. One exchange with Zayn and a fan’s father is particularly well executed. Likewise, the artwork from series regular, Serg Acuna is typically on point.

Sami Zayn and Kevin Owen’s feud with Shane McMahon dragged on a little too long in the WWE at the beginning of 2018 but the comics should be able to pace the story a little better. I’d like to see them explore the return of Daniel Bryan, perhaps with a side story leading into their final showdown at WrestleMania 34.

Elsewhere, in the comic, we get a very short but very nice story called ‘Second Nature’ which shows the careers of Ric Flair and Charlotte Flair mirroring each other. This was a nice addition to the story and features some typically solid artwork from series regular, Lorenzo Rodriguez.

On the whole, WWE #19 is yet another solid entry from the Boom! Studios collection. Zayn and Owens make for interesting characters to explore and hopefully, the comics will take the opportunity to explore the duo’s backstory in the coming months.