Activision and Treyarch have announced details for not one, but two Betas for their upcoming Call of Duty: Black Ops 4.  Not only will players be able to try out the multiplayer features in the Multiplayer Beta this August but they will also be able to get hands on this September with Black Ops 4‘s very own battle royale mode, Blackout. 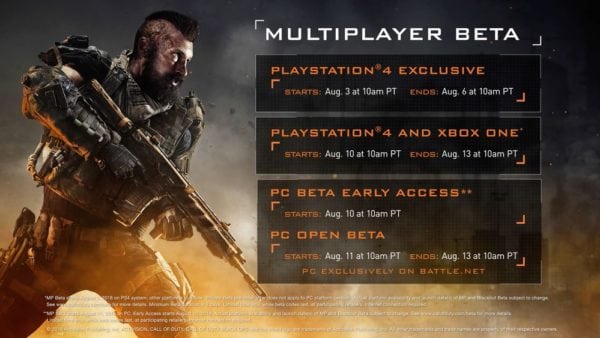 The schedule for the Multiplayer Beta is as follows:

Those who participate in the beta will receive a unique calling card that they can proudly display plus all those who achieve max rank in the beta will earn a Permanent Unlock Token to apply to any piece of Create-a-Class content when the game is released.

The Multiplayer Beta will feature:

“This is an exciting opportunity for us at Treyarch because – not only are we putting more content into players’ hands earlier than ever before – we get to break new ground by hosting two separate Beta experiences,” said Co-Studio Head Dan Bunting. “Games are better when they’re a result of a dialogue with our community. Not only does it improve the game’s quality, but it allows us to respond to player feedback and custom-craft the experience to how players engage most with the game. We want launch day to be a celebration that players around the world can enjoy together, and we know it won’t stop there – we will always work tirelessly to improve, grow, and evolve the game beyond launch.”

Will you be taking part in the beta? Let us know in the comments below…