Bob Parr (Mr. Incredible) is left to care for the kids while Helen (Elastigirl) is out saving the world. For Mr. Incredible and co., it’s been moments. For everyone else, fourteen years, and a long one at that. The world has changed since The Incredibles redefined what a superhero film could be: an entire cinematic Universe was spawned, others came to fruition only to fall at the first hurdle, three Spider-Man’s, two Batman’s, two Superman’s. But for the Parr’s, it’s been seconds.

The Underminer has attacked and The Incredibles are in hot pursuit. As they fight to bring the Mole Man to justice, they wreck havoc, much to the dismay of the US government who still see superheroes as vigilantes with no restraint. The Superhero Relocation Program is shutdown, forcing the Parr’s back into a drab life of normality. Entrepreneur and owner of telecommunications company DEVTECH Winston Deaver (Bob Odernkirk) have different plans. Alongside sister Evelyn (Catherine Keener), they choose Elastigirl (Helen Hunt) to spearhead a publicity stunt to reignite the public’s love of all things super thus leaving Mr. Incredible (Craig. T Nelson) to look after Dash, Jack Jack and Violet.

It’s a welcome return and a warm embrace from a group of characters fully realised and a world with real palpable depth. Leaving mere moments between the ending and beginning of the sequel condenses fourteen years into nothing, as if they never left.

It helps too that the opening set piece – and all that follow – are wildly inventive and boldly imaginative. There’s real threat, objects have a physicality and Pixar understand that animation gives you leeway to affect the world in a way live-action restricts you. An extraordinary sequence mid-way through film finds Elastigirl battling new super villain, the Screen Slaver against a wall of strobe lighting. It’s alarming and oft-genuinely unsettling.

The film is at its best however when small. Bob’s struggles with Dash’s math homework and his failed attempts to help Violet with her boy struggles are broad but deeply heartfelt. Pixar have long understood the need to ground their films in familial relationships, and the Parr family are a crowning achievement in finding the quiet and amidst the grandiose.

Jack Jack too finally has him moment in the limelight. His powers are erratic: he can travel through dimensions, shoot lasers out of his eyes, mimic those around him, spontaneously combust and turn into a devilish demon. In a sequence of slapstick brilliance, his powers come to fruition during a battle with a raccoon. Taking notes from Keaton and Chaplin, it’s a five-minute master class in silent comedy.

Narratively the film follows a path maybe too close to the first and it unravels slightly during a final third somewhat rushed and clinical in its want for a closed-ending. At just shy of two-hours, it may be a stretch for a younger audience. Action sequences – although exceptional – are sparse, with much of the film designated to long conversations about morals and the detrimental influence of the media upon the public. 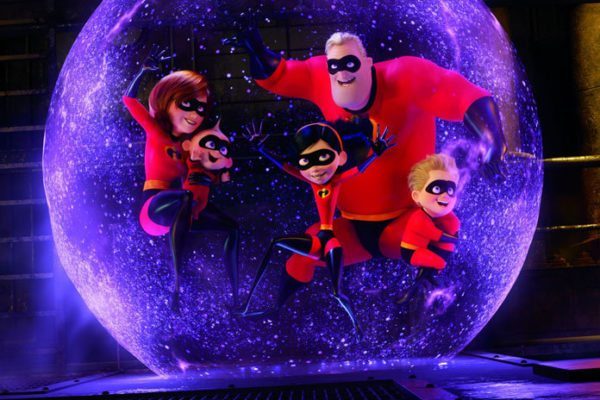 And its there where the film is at its boldest. In Screen Slaver, you have a villain stoutly provocative. The fourteen year gap brought about a wealth of superheroes leading to a much discussed “fatigue.” Incredibles 2 wants the audience to be aware of the seductive manner of blockbuster media and it’s mind-numbing influence. It somehow manages to both have it’s cake and eat it too.