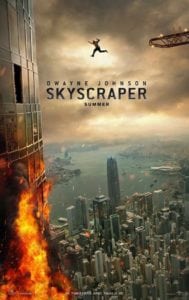 A father goes to great lengths to save his family from a burning skyscraper. 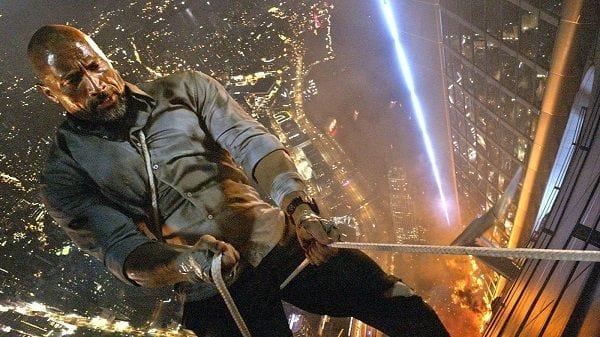 The plot for Skyscraper is unbelievably stupid and the various death-defying set pieces even more so, nevertheless it’s great mindless fun. In his latest action role Dwayne Johnson plays Will Sawyer, a former Marine and FBI Agent who is now a security assessor, following a mission gone wrong and a life changing injury some ten years earlier. He has been assigned to assess The Pearl, a gigantic building in Hong Kong, for any security issues. After a team hijack the building and set it on fire with his family still inside, Will must defy the odds and save the day.

There is no new ground covered in Skyscraper and it pays homage to a number of superior films including Die Hard and The Towering Inferno. One comparison that kept springing to mind during the finale was a scene in Total Recall with multiple Arnie’s confusing everything. Although Skyscraper has no surprises to offer (the best bits are shown in the trailer) it is a ton of fun and the perfect film if you want to switch off and see Dwayne Johnson use duct tape to save the day. It also doesn’t try to take itself too seriously which is a relief. 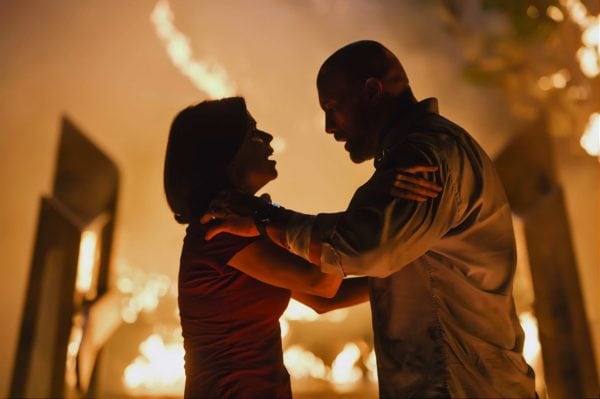 The appeal of Dwayne Johnson is what elevates Skyscraper from a run of the mill dumb actioner. He’s never going to be the world’s greatest actor, but he has a ridiculous amount of charm and you can’t help but root for him in whatever film he’s in. Even in the film’s silliest moments you can’t help but smile as Johnson uses duct tape to stick himself to the outside of a building or uses his character’s false leg to cling to the side of a building. There has been some outrage about the casting of Johnson as an amputee. I don’t have much to say on the matter other than it would have been refreshing for Hollywood to cast a real life amputee in the role. Ultimately though it all comes down to box office numbers and Johnson is an established star.

The supporting cast are perfectly fine in their roles. Neve Campbell as Will’s wife Sarah gets a few decent action moments and Noah Taylor chews the scenery. What Skyscraper lacks is a compelling villain. Roland Møller is completely one dimensional as antagonist Kores Botha and does little but stand around and look menacing. There is no substance to his character and other than the physical threat he poses he leaves little impression. A villain akin to Hans Gruber would have elevated Skyscraper to more than just a CGI action fest; but ultimately this is about Dwayne Johnson saving his family and looking awesome whilst he does it.