In the fall of 1960, Father Thomas Riley and Father John Thornton were sent by the Vatican to investigate a miraculous event in an Irish home for ‘fallen women’, only to uncover something much more horrific.

The Devil’s Doorway ponders an age-old genre question: what if found footage…but in the 1960s? Northern Ireland’s (*first female horror director*) Aislinn Clarke dials back HD brightness, crisp audio sounds and uninterrupted zooms for an old-school sheen complete with archaic clunkiness (on purpose). Yes, children. Before videos could be recorded on cell phones and uploaded immediately to cloud databases, physical spools of film spun around contraptions and imprinted visuals that subsequently needed to be developed. By people. Wild, right? Manual processes will probably be scarier than Clarke’s blasphemous “Doubting Thomas” rehash to some, as period aesthetics excuse an otherwise written-in-stone fight against He Who Shall Not Be named (the real one, not the Harry Potter guy). Thinking specifically of genre vets who won’t leap and squeal at every witching hour haunt.

We first meet Fathers Thomas (Lalor Roddy) and John (Ciaran Flynn), two hands of the Vatican who must investigate a “Magdalene Laundry” after reports of “miracles.” Father John brings his camera equipment to record everything. Mother Superior (Helena Bereen) is curt with her guests and warns them against poking around too much. Turns out her cautionary paranoia comes with good reason. On the first night, Father John hears children playing outside his room. The issue? No children are rostered in the work camp. With no explanation, the padres begin investigating what could be a much larger conspiracy – and that’s when Hell opens its gates.

Clarke’s most effective filmmaking prowess spreads a dreadfully tense atmosphere by exploiting historical traumas. Secrets of the Catholic church run a river of blood, as we get but a taste of “Magdalene Laundries” slave labor asylums that imprisoned many women pregnant out of wedlock. These institutions were run by nuns, caged “unsavory” women (prostitutes, unfaithfuls, etc.), and claimed to have put bastard children up for adoption – but the reality is much bleaker. Clarke’s knowledge of such indecency fits for a fiery uprising filled with all the possessive torment you’d expect. Contortionist body pretzeling, milky-white eyes, overturned crosses – but it’s deserved. Clergymen face off a demonic presence brought upon by their own faction’s doing. Repentance, skull-and-crossbones style.

Due to the film’s smaller scale – “interaction” radii covers a few rooms, only four characters truly matter – found footage POVs stress quick and flashy terror. Literally “flashy,” as Father John’s camera spotlight will flicker on-and-off to reveal the sight of an undead child only to then have it vanish next burst. Expect these thrills frequently and often, as jolt scares account for 90% of the film’s horror intensity. This might affront some viewers, while others surely will curse Aislinn Clarke’s name with each whispered “They’re gonna kill you!” It always happens around 3 AM, Father John mostly explores alone and children’s giggles are of no shock – it’s the good and the bad about The Devil’s Doorway. Nothing quite revolutionary besides defunct 1960s aesthetics of plain walls, strewn animal skulls, and moldy basements. 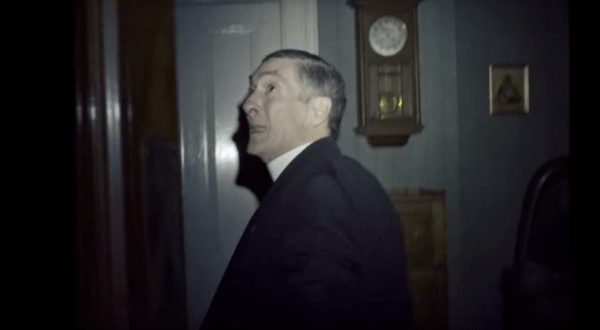 Clarke’s time capsule mentality means that audio tunes with a bit of static and isn’t able to capitalize on acoustic clarity like new-fangled equipment can. Father John’s footage suggests a portable 16mm rig, which means zoom-ins require the flipping of a metal cover (over the screen) and orangey-white flares will interrupt footage mid-take. Again, this will be a deterrent for some. For others? The mixture of antique mustiness and the appearance of ghosts will be a sinfully endearing repurposing of dreariness unchained. Cinematographer Ryan Kernaghan understands the horror in each scenario, and while set dressings may be minimal, he scans environments to make open foyers seem claustrophobic. Long empty hallways drawn tight and compact. A rather large complex meant to crush like a shrinking box, which may just be The Devil’s Doorway’s saving grace.

What begins on a rather mundane note of playtime and puppets eventually explodes with exorcism revelations. The more Father Thomas and Father John uncover, the more plot digestion scorches your insides. Lauren Coe’s introduction as disgraced “victim” Kathleen represents a turning point in Clarke’s methodology once focus shifts from teary-eyed Virgin Mary statues to scratched-up, malnourished woman held in basements. Mother Superior has already proven herself to be a wicked woman of the cloth, which leads to (fading) ambiguity over what evil might truly exist. Satan’s hold over a chained-up girl? Or the whip-ready headmistress who holds no sympathy for “lost souls.”

Let’s make things easy. The good about The Devil’s Doorway? Aislinn Clarke records a moody descent into the bowels of hell right inside God’s backyard, making monsters of those who you’d otherwise assume angels. The bad? It’s the jump-scare-a-minute found footage flick with little formula deviation. All nighttime ghouls and quick-pan attacks – albeit with some altered material downgrades (think The Quiet Ones, but more “authentic”). It’s short, punchy, and Clarke acts on a simple plan. Given how The Devil’s Doorway barrels straight into Catholicism damnation, you could do *far* worse – especially considering how history and horror collide.