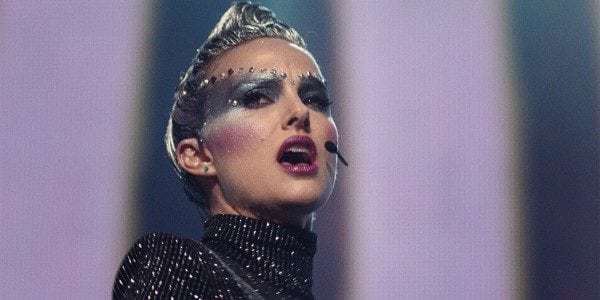 Ahead of its world premiere next week at the Venice Film Festival, the first teaser trailer has arrived online for writer-director Brady Corbet’s (The Childhood of a Leader) upcoming musical drama Vox Lux which sees Natalie Portman leading a cast that includes Jude Law, Raffey Cassidy, Stacy Martin, and Jennifer Ehle; watch it here…

Here’s the synopsis for the film, via the Toronto International Film Festival:

The film begins in 1999 with teenage sisters Celeste (Raffey Cassidy) and Eleanor (Stacy Martin), who have survived a seismic, violent tragedy. The sisters compose and perform a song at about their experience, making something lovely and cathartic out of catastrophe — while also launching a career.

The sisters draw the attention of a passionate manager (Law) and are rapidly catapulted into fame and fortune, with Celeste as the star and Eleanor the creative anchor. By the film’s second half, set in 2017, the now 31-year-old Celeste (Portman) is mother to a teenage daughter of her own (Cassidy) and struggling to navigate a career fraught with scandals when another act of terrifying violence demands her attention.