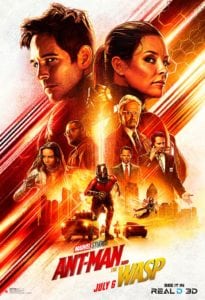 After the firing of Edgar Wright, the first Ant Man arrived in cinemas along with a hefty dose of scepticism and many of us (myself included) were surprised at how good that origin heist movie hybrid worked. The same can’t be said for its sequel Ant-Man and the Wasp which is entertaining, but is very much a by the numbers, safe film.

Set before the events of Infinity War, we find out that Scott Lang (Rudd) is under house arrest following the events in Civil War and that he is no longer in contact with Hank (Douglas) and Hope (Lilly). After a quantum realm dream sequence, Lang and the team are reunited to try and save Hope’s mother and battle a villain called Ghost (John-Kamen). Alongside all of this there’s a subplot with Walton Goggins as a shady business man called Sonny Burch who wants Pym’s tech.

First and foremost, Ant-Man and the Wasp is a fun film. The action sequences are well choreographed and the comedy that comes from the shrinking and enlarging tech still hits the mark. As Ant Man, Rudd’s effortless charm and charisma is perfectly suited and he once again embraces the absurdity of the situation and goes for it. But this isn’t a story about Ant-Man, it’s about Hank and Hope searching for their wife/mother (Pfeiffer). Ant Man is just a means to an end which has the effect of neutering his arc. All we learn is that he is the best Dad ever – a fort stretching throughout his house at the start of the movie is awesome – and that he won’t abandon his friends. Michael Pena as fast talking friend Luis is the highlight and the dynamic with him Scott, Dave (T.I.) and Kurt (Dastmalchian) makes for some of the best scenes in the movie. In fact everyone puts in a good performance but there is a distinct lack of threat during the film and not for a second do you feel that there’s any real danger. This comes down to the same problem as a lot of Marvel films: a weak villain. Ghost (John-Kamen) is bland, her motivations obvious and other than a few decent action scenes, she leaves literal impression. I’m not sure what it is about Marvel films and bad villains. Every now and then they pull it out the bag (Loki, Winter Soldier, Killmonger) and deliver, but Ghost sits alongside a bunch of naff villains like Malekith (Thor: The Dark World), Whiplash (Iron Man 2), and Yellowjacket (Ant Man) which nearly send you to sleep.

After the pummelling the audience received watching Infinity War, Ant-Man and the Wasp is a welcome bit of formulaic fun, but it sits firmly in the middle to lower tier of the MCU. For those wondering how it links to Infinity War, make sure you stay for the mid-credits scene.