Asobo Studio have unveiled a new gameplay trailer for their upcoming adventure A Plague Tale: Innocence.  In this 16 minutes of gameplay we follow Amicia and her young brother Hugo through a section of one of the game’s chapters.  Around them are dead soldiers from a bloody battle between the English and French armies and swarming between them are the rats with their voracious appetites.  Watch this video below…. 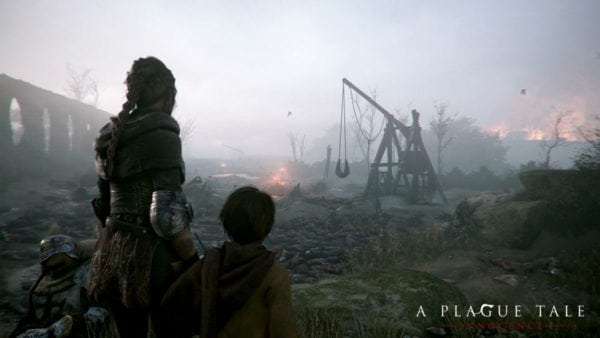 In A Plague Tale: Innocence players will be transported to the kingdom of France during the time of the Hundred Years War.  Death is everywhere and the plague has ravaged the streets of every city, town and village.  With food so plentiful, rats are breeding in huge numbers and their insatiable appetites drive them to consume anything in their path providing there is no flame to deter them.

Taking the role of young orphan Amicia players must guide her and her brother past rats, soldiers and the Inquisition who are in hot pursuit.  In order to survive the player can join forces with other orphans to get past the many hazards that stand between them and safety.

The story of A Plague Tale begins in 1349. Rats swarm in uninterrupted waves throughout the territory of France. In the plague-ridden villages, countryside and battlefields, this uncontrollable and voracious mass advances relentlessly. The creatures devour everything in their path, men and animals alike, to satisfy the endless hunger of their ever-increasing numbers. In the midst of hundreds of piled corpses, hordes of rats teem over the bodies and leave little hope for Amicia and Hugo to escape with their lives – the faint glow of the flame Amicia holds appears to be the only thing that repels A Plague Tale: Innocence’s swarming menace.

A Plague Tale: Innocence arrives on Xbox One, Playstation 4 and PC in 2019.