Tom Jolliffe looks back at Blade, after it turns 20… 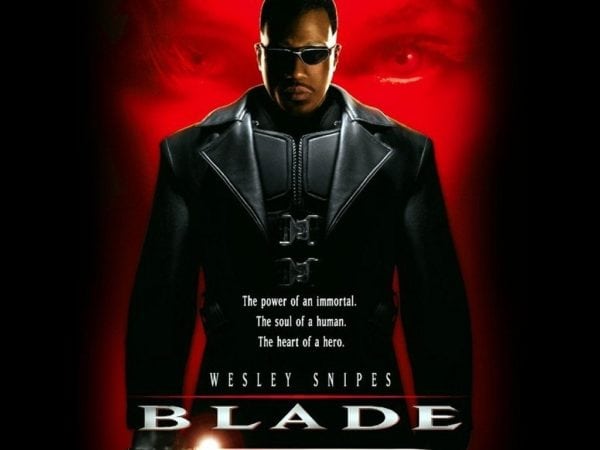 I remember it well. I remember it like it was only 10 years ago in fact, but it’s not. It has been 20 years. A tired action genre. A few brief flashes of excitement here and there. Schwarzenegger and Stallone were tiring and in their attempts to branch out, were doing largely dreadful films (aside from Stallone’s brief, triumphant return to dramatic respect with Copland). Van Damme and Seagal were now disappearing into straight to video obscurity. Nic Cage was a one man saviour of the genre, between The Rock, Face/Off and Con Air.

Still, prior to The Matrix flipping everything on its head, audiences wanted something a bit different. Something potentially genre-redefining. Then came Blade and it came so, so close. For one thing, it would spark off the potential for Marvel hit movies and came after Batman (for the rivals) had hit a disastrously campy iceberg in the form of Batman and Robin. It also gave a black actor a tent-pole blockbuster, which in turn, made big money. Wesley Snipes by this point was a bankable actor. He had a degree of popularity thanks to films like New Jack City and White Men Can’t Jump. Likewise he’d also begun to establish himself as an action star to potentially rival Stallone et all (even facing off with Sly, as chief villain in Demolition Man). He came to Blade as a legitimate actor, and with a background in martial arts, as a legitimate tough guy. That mixture was pretty rare at the time. He could do what Van Damme was doing but also what Denzel Washington was at the time. An action man, a real life ass-kicker and an actor combined. 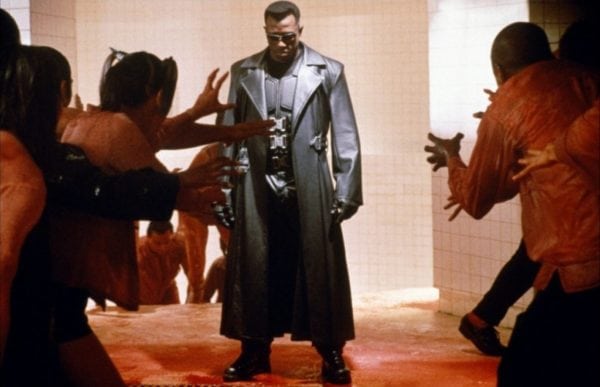 So in August of 1998, in the US, Blade was released to a degree of fanfare. A decidedly adult comic book tale, based on one of the more underground characters in Marvel canon. Throughout the 90’s there had already been several failed underground comic book films in the form of Phantom or The Shadow for example. Only comic aficionados had heard of Blade. This would live or die on marketing and the pulling power of Snipes. It also teased a vibrancy and style that certainly influenced a lot of action films of that era. From fast paced editing to a thumpingly techno soundtrack, it went against the traditional styling in a big way.

When you look back at the film, for large parts, it still holds up. It’s dark. It’s interesting. It has wry humour. The opening is one of the best action film openings ever. Introducing Snipes as an almost Terminator-esque angel of (vampire) death. The effects have dated granted, but the way the vampires just disintegrate into flaming ash is eye-catching none-the-less. From that moment former porn-starlet turned B movie actress, Traci Lords escorts an unwitting human to an underground vampire rave, this film kicks you in the cults. Muted colours, an evocative synth soundtrack that gives way to drum and bass as action kicks in. The film has a distinct look. 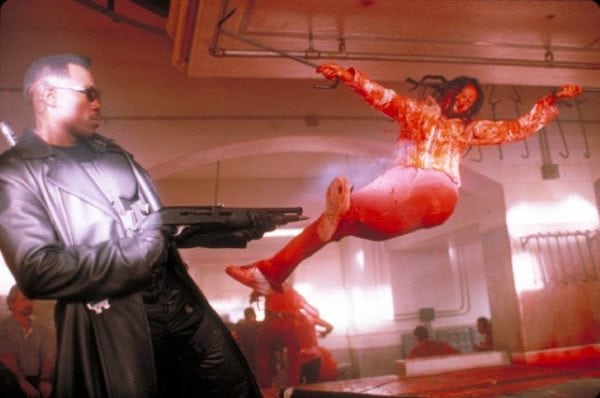 With an interesting and charismatic villain, as well as an engaging Snipes, the film builds along well as Dorff attempts to reawaken a long dormant blood God, and of course Blade (half human/half vampire) holds the key within his veins. Then something happens. The film is beautifully balancing a delightful display, a perfect pyramid, of Ferrero Rocher (with these Rocher, you are really spoiling us). Then a judder, and a few begin to fall off. By the end, there are still Rocher on the tray, but the display isn’t as impressive as when it begun. That turning point lies in sun-block. The moment you see the Vampire villain out in daylight. Unperturbed by the scorching sun above him, is the moment you realise the screenwriters were beginning to run shy of ideas. Blade sees Frost out and about, not a care in the world. “Sun-block?” he asks. Oh dear. Then the finale. The whole build up to the vampire apocalyptic event. There’s all this great fight action. Snipes ploughs his way through a legion of Vampires before facing off with a recently superpower endowed Frost, and that’s when it becomes clear that the film-makers couldn’t quite figure how to show the vastness of said power (in fact what is on screen is attempt two, as an even worse alternate version exists). The CGI looks ropey, the final battle clumsy, and the showdown is pretty disappointing. From major logic drops, to ill-conceived final battles, Blade goes from full blown action master work, to ‘remember Blade? Yeah, pretty good wasn’t it?’ So close…yet so far.

Still, whilst this wouldn’t achieve iconic levels of status to quite the degree that The Matrix would enjoy a year later, it remains an enjoyable action film scattered with great moments and which acts as a showcase for Wesley Snipes brand of quick, street style martial arts which look great on film. It spawned two sequels, from Guillermo Del Toro’s glorious looking Blade 2 which suffered from similar Rocher displacement to a franchise killing disaster in Blade: Trinity which was akin to Cosmo Kramer comedically prat falling with his Rocher tray over every piece of furniture in sight until he’s accidentally flung the tray out the open window (cue stock sound of cars skidding and crashing) .