An Evening With Beverly Luff Linn, 2018. 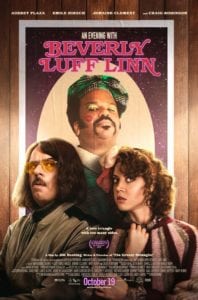 Lulu Danger’s unsatisfying marriage takes a turn for the worse when a mysterious man from her past comes to town to perform an event called “An Evening With Beverly Luff Linn; For One Magical Night Only.” 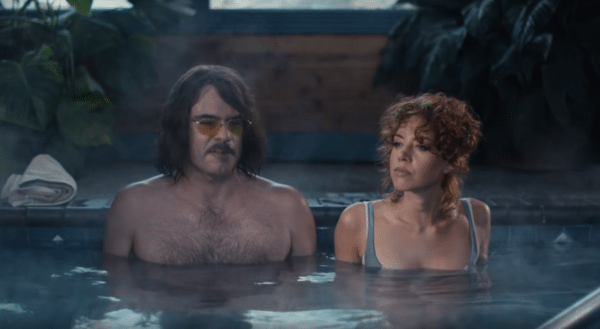 Jim Hosking knows how to test patience. His films are petulant and innately irritating, like a young child kicking the back of your chair even after you tell them to stop. So why is it I found them so fetching? Maybe it’s a case of Stockholm syndrome; I can’t leave so I may as well ride the vulgar waves until I too scream “hooty tooty disco cutie,” or maybe it’s that Hosking is a genuine auteur, just one dripping in greasy absurdism.

The Greasy Strangler wasn’t for everyone, but I wanted it to be. It became a permanent fixture, no friend that would knock on my door could escape its sleaze and for the most part, they were left quaking in a state of distressed bemusement.

Hosking’s follow-up, An Evening With Beverly Luff Linn is an all more starry affair. Aubrey Plaza, Jemaine Clement, Emile Hirsch, Matt Berry and Craig Robinson headline, each playing up the absurdity to a frankly hysterical T.

Aubrey Plaza is Lulu Danger, bored and unsatisfied by husband Shane Danger (Emile Hirsch), she spends her days smoking and watching endless television. In financial ruin, Shane – alongside bumbling coworkers Tyrone (Zach Cherry) and Carl Ronk (Sky Elobar) – decides it sensible to rob Lulu’s vegan brother Adjay (Sam Dissanayake). Colin Keith Threadener (Jemaine Clement) promises he can get the money back and “blow out both of his kneecaps,” and sets off on returning the bounty. 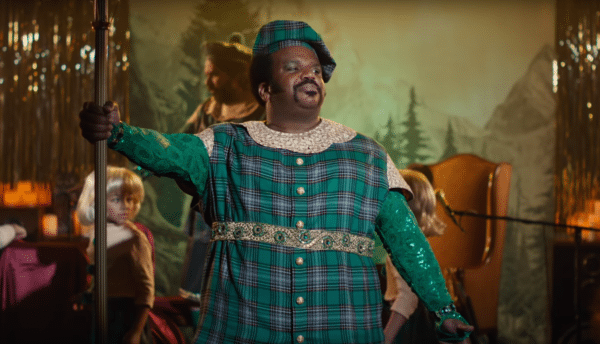 This as a mysterious roadshow, “An Evening With Beverly Luff Linn,’ headed by enigma Beverly (Craig Robinson) and bearded cohort Rodney Von Donkenstieger, rolls into town and catches the attention of Lulu.

Like The Greasy Strangler, it occupies a world at once uncanny, at once disparately stupid. Characters momentarily reflect real people, only to spiel on about cappuccinos and groan incessantly. It’s almost Lynchian, if Lynch loved a good fart joke and short shorts.

And it is truly annoying, jokes are stretched to the absolute limit – a good minute sequence of a character coughing – and the characters themselves are petulant and truly irritating.

But it’s that which makes it just more impressive. It’s a film the grates at you that builds and builds only for the punch line to involve a flute, a gag about Scotland and football referees, yet I fell for it. There’s something truly impressive just how committed the film is to aggravating the audience.

Be it for Emile Hirsch, miscast and maybe overly committed to the sleaze, the cast are uniformly great. Plaza continues to impress and to see Berry in a major role is always a joy.

Sitting through Beverly Luff Linn is a lesson in sustained mania. The screening I was in seemed to be split into two; of those bored, aggravated and teetering on the edge of disgust, and those clapping along with the petulance. I was absolutely in the latter camp.