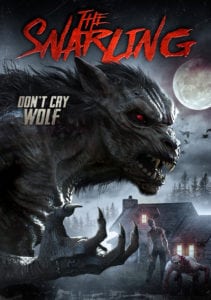 An English village is taken over by a film crew making a zombie movie. A group of locals finds a way onto the production in hopes of getting famous. The real horror begins when something starts killing locals and crew, leading an investigator and his unlucky sergeant Haskins to figure this mess out.

Nailing the perfect horror comedy is hard. Balancing the two genres and making the most of the juxtaposition is a daunting task many filmmakers have tried, but rarely nailed. For every Tucker & Dale Vs. Evil, you get plenty of Scary Movie sequels. To its credit, The Snarling manages to land right in the middle. The comedy outweighs the horror in this “horror comedy,” but the film still feels like its made with horror-filled love.

The film starts with a pretentious actor’s meltdown about an extra, concluding the cold open by hitting her, much to the annoyance of the film’s director. This moment instantly sets the tone for The Snarling as it gives you the best of both its worlds. There’s an immediate jump-scare followed by some pretty great comedic work; basically how the rest of the film plays out, but it doesn’t run its course. In all honesty, the tone of the film might be the very best thing about it. Going the route of “film within a film” allows for this to use tropes found in horror to fall within the films fictional project, and gives the filmmakers the chance to push themselves in other directions.

Another element to the film’s story is the police’s investigation, calling back to another style of horror. The Snarling is an homage to 1981’s The Howling, but this bumbling duo and their hijinx add an element of classic horror comedy like an Abbott and Costello film. Detective Inspector (Pablo Raybould) and Haskins (Ste Johnston) work so well together that I found myself wanting to the movie to focus on them just a little bit more. Juggling the production storyline, the trio’s storyline, and the police storyline wasn’t always perfect and focusing a bit more on the better one would’ve helped the film flow a little easier. Detective Inspector and his team are the glue that holds everything together, not only for the character’s investigation but the movie itself.

The only weak story element is the three local friends (Laurence Saunders, Chris Simmons, and Ben Manning). They do a solid job of handling the majority of the film, but personally found myself the least interested in their developments. Maybe it’s the interest in Detective Inspector’s story, but the trio felt like they were just for story purposes and didn’t transcend anything. It’s the struggle of being the main characters, but sometimes supporting roles shine a little more. When they intermingle with the other storylines, the characters of Les, Mike, and Bob finally feel interesting, but anytime they get some alone time, it gets a bit tedious. Again, it is nothing against the actors but how the characters and their unlikeable factor.

The only thing genuinely holding The Snarling back is the low-budget. It’s hard to knock a movie for things like its budget, and at times the filmmakers rise above it here, there are still some technical issues that are a little hard to overlook. Editing and some of the post-production effects being the focus of the majority of my gripes. There seems to be a filter over some scenes, sometimes making them looks darker or a little desaturated. The darkness issues seem like they shot a lot of scenes during the daytime and wanted them to be night scenes; a common practice but hard to perfect. The desaturated scenes don’t come with an excuse. It seems like a stylistic choice that doesn’t work well for me.

The practical effects are probably the only other notable issue. While our werewolf looks excellent at times, the movie within the movie has some laughable effects. Sure, it’s motivated by the low-budget of The Snarling’s fictional film, but it still doesn’t take away from the fact I had to look at it often. The ghostly appearances of the extras are such a lame effect and could’ve been avoided altogether by just making the ghouls or zombies a bit gorier. Now while the werewolf does work, his skills do not. A lot of them are hidden with cheap effects like a strobe light or done in complete darkness. A trick to not bring out some insane gore, but it does make the film lack a little extra something.

For what its worth, The Snarling comes with a significant recommendation. Some obvious issues like the budget and inexperienced actors hold it back from being one of the top-notch horror comedies, but it almost hits that level. In the grand scheme of werewolf movies, this doesn’t reach the level of a film like Ginger Snaps but doesn’t feel as lackluster 2004’s Cursed.

Give The Snarling a viewing if you are looking for a fun time with English comedy, a giant werewolf, and one of the best on-screen comedic cops in quite some time. My biggest takeaway from the film is the need to see more films directed and starring Pablo Raybould. When Raybould gets something right, it’s near genre perfection!