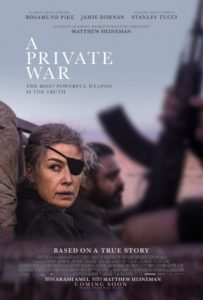 Marie Colvin (Rosamund Pike) was a professional addict, only she was drawn towards the lure of the war torn hostile territory of Libya, or Syria, in order to report on the human cost of the atrocities. It was a drive that would lead her to Homs, and an inevitable fate.

There is a scene towards the end of A Private War that captures perfectly what Matthew Heineman has managed to achieve with his account of the legacy of trailblazing field journalist Marie Colvin.

Rosamund Pike sits in a bombed out Syrian house, with percussive shells exploding around her, as against the better judgement of her photographer (Jamie Dornan), and boss (Tom Hollander), she risks everything to speak to CNN in order to document the plight of the women and children being targeted by the Assad regime. It’s a sequence bristling with tension, humanity, and the palpable sense of inevitability. It paints the picture of a stubborn, deeply emotive woman, who believed in more than just front page notoriety, and paid the biggest price for it. What Heineman makes you understand is why she’s there, for better or worse, and how important it is that she was.

Heineman has of course been here before, his stunning documentary City of Ghosts went to the the very heart of Raqqa at a time when it was one of the most hostile places on Earth. So it’s no surprise that A Private War is most successful when it’s going into the battle grounds on which Colvin sought out her very human stories.

As such, the more private aspects of her London life seem rushed in order to plant her in the field. There’s very little of her origin story beyond the fact she grew up in Oyster Bay, Long Island, but that can be chalked up to the fact she was a person who’s hard to dissect, and the film wants to present a woman for whom the work is everything. So it’s frustrating that her British Press Awards speech is excised, and we get very little depth to her beyond the booze, patch, and stoicism. Even when it’s left to other characters to paint a picture of Colvin, you get plum dialogue like “you were like a moth to a flame”.

A Private War rests on the shoulders of Rosamund Pike, and she gives everything to the role. Embodying a woman with such inner strength, one trying to cope with the fragility and slow decline of the human body. She rubs at her working eye socket at times of stress, and transforms from an awkward vulnerability at home, to a striding, impassioned firebrand when confronting danger, or interviewing Colonel Gaddafi about his dictatorship. When the movie around her sometimes falls into the trappings of a biopic, Pike elevates it all with a remarkable portrayal that balances the brittle with the ballsy.

As one of the few constants in her life according to this film, Jamie Dornan also gets the chance to impress as Paul Conroy. His chemistry with Pike emits a real warmth, complimenting her, allowing her the chance to pull back Colvin’s tough veneer on more than one occasion, adding to the impact of that fateful day in Homs.

As a eulogy to Marie Colvin, A Private War is a measured testament to the kind of sacrifice that very few would be willing to make for the benefit of others, with a fiercely committed role from the increasingly brilliant Rosamund Pike that’s worth the ticket price alone.