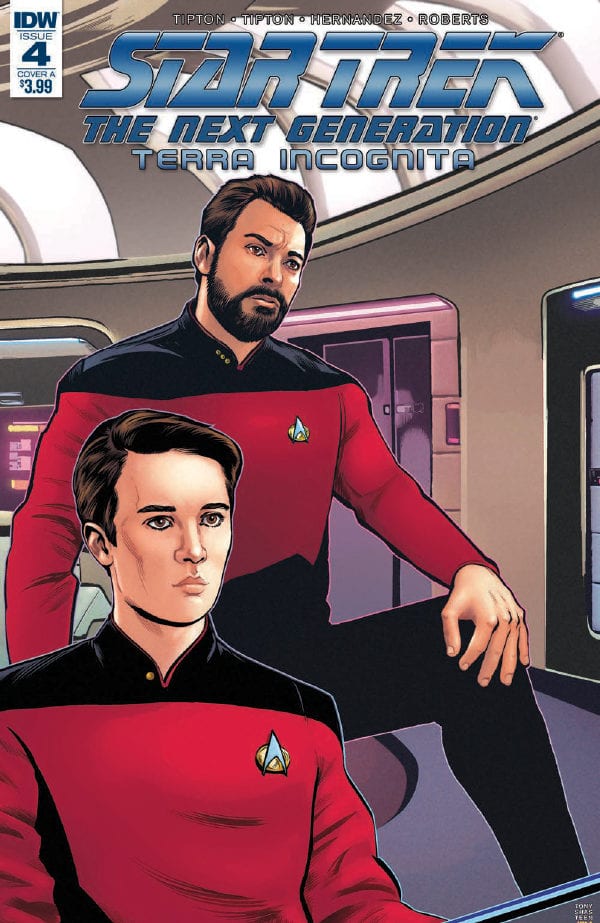 With the ongoing web being woven within Star Trek: TNG “Terra Incognita” from Scott & David Tipton, we’ve so far seen: suspicious engine failings of Federation vessels, peace treaties between the Cardassians barely holding, the loss of a Vulcan Ambassador, the ongoing fallout of the devastating battle at Wolf 359 and of course Mirror Barclay is still wandering the corridors of the U.S.S. Enterprise-D. Where the next thread is about to be spun from only the Tiptons know.

With Riker interrupting another one of Ensign Crusher’s Holodeck command training programs, he offers him the opportunity to actively be involved in an upcoming away mission, which is vitally important to the future of the Federation.  And so Wesley beams down to Faundori with Riker, Barclay and also Ensign Gilson, where they’re met by the Administrators of the planet who take them on a tour of this highly efficient, industrial world.

All doesn’t go well however, for as soon as the tour begins it rapidly becomes apparent that not everything is fine when the automated tools turn on the Away Team. With the Builders of the planet being pointed at as those responsible, Riker has more pressing matters on his mind…and there’s no way of calling for help.

Once again, as with the previous issues, I keep expecting Mirror Barclay to do something outstandingly wicked, yet here I am (again) believing that our Dimensional Doppelganger is nothing more than a fantastic PR Agent for Prime Reg.  For in the brief panels which Mirror Barclay does share with the crew, he gives good advice, specifically here wisdom that pushes Wesley further and as such gains him praise from Riker. I’m getting nightmares that come the close of this series, it’ll echo slightly Philip K Dicks Human Is and we’ll see the Enterprise-D crew realising they like Mirror Barclay better and keeping the real Reg on ice forever!?  Could the Tipton brothers be that cruel!?

Before I close, as ever Angel Hernandez’s artwork and Mark Roberts’ colours are just perfect for this series.  They work fantastically well together and they clearly know how Star Trek should look on these pages.  Whenever I see their names at the beginning of a Trek comic book I know “here lies greatness”.

Though not as a exciting nor powerful as previous issues, you cannot fault it for most definitely being a Star Trek story. It’s not the strongest entry in the series so far, but certainly not bad by a longshot.

SEE ALSO: Check out the preview for Terra Incognita #4 here