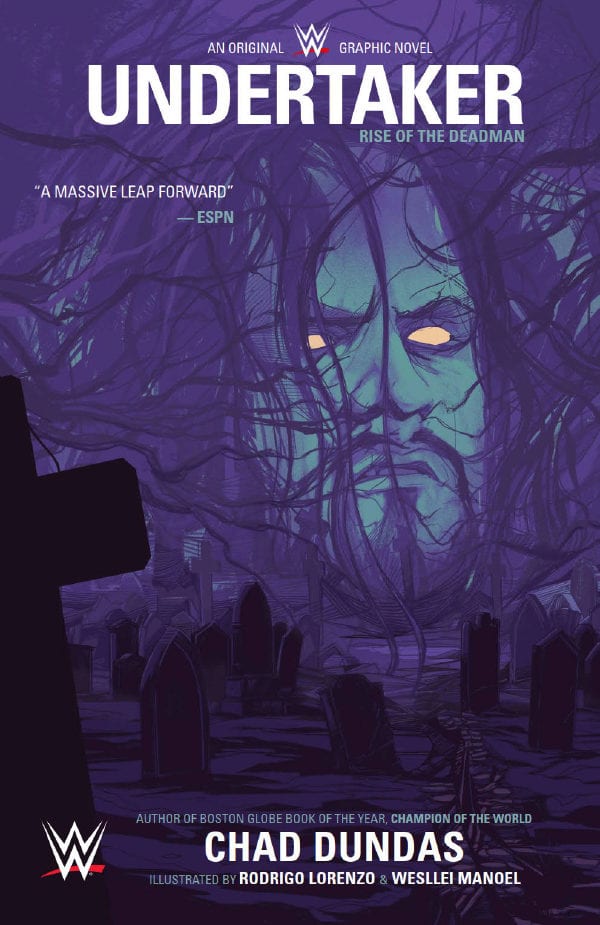 Boom! Studios have done an excellent job at producing WWE comics over the last couple of years, and the publishers have now taken the risk of publishing their first WWE graphic novel. The novel focuses on one of the most iconic wrestlers in the history of the industry, The Undertaker, starting with his Kayfabe beginnings, growing up with his brother, Kane, all the way to his WrestleMania 34 encounter with John Cena earlier this year.

Tackling three decades of The Deadman’s career, the novel spans 109 pages and calls on various artists to help bring the iconic character’s story to life.

The Undertaker is one of the most beloved characters in the history of wrestling, and his in-ring career is the stuff most wrestlers can only dream of. The novel starts with the former WWE Champion’s kayfabe childhood, exploring his relationship with his brother Kane heading into the horrific fire that would separate them and kill both of their parents. Of course, this stuff all came from the warped minds of the WWE creative staff but writer, Chad Dundas does an excellent job of making the story seem real.

The opening pages of the novel play out like an origin story and Boom! Studios regular Rodrigo Lorenzo does an excellent job at bringing the whole thing to life with his artwork. What is more impressive about these early pages is that usually, the artists have real-life in-ring images to help them illustrate the wrestlers but here, Lorenzo has done an excellent job of simply imagining younger versions of the character.

This all leads to Taker being adopted by Paul Bearer and the novel does a great job of establishing a life-long partnership between the men. The two men’s stories are interlinked throughout the novel, and their various ups and downs play out over the course of nearly 30 years. Paul Bearer passed away in 2013, and the novel handles this in a sensitive and effective way.

The other big character, of course, is Kane, and Dundas does a great job of establishing a strong bond between the two brothers. While Kane’s initial motives upon his 1997 debut could have been explored in a little more detail, the novel does an excellent job of bringing the two men’s stories full circle come the closing pages.

One thing that does damage the novel slightly is the decision to change the artists for certain chapters in the novel. Chapter three and four feel particularly weak from a visual perspective, with some wrestlers, notably Brock Lesnar and Kane, being virtually unrecognisable.

The rest of the novel, however, is expertly handled by Lorenzo, and the colour work from Wesllei Maneol is also spectacular. Maneol does a thrilling job of bringing the bright lights and colours of the Attitude Era to life, and he also manages to juxtapose Taker’s in-ring life with his normal life expertly through the use of different colour pallets.

On the whole, Undertaker: Rise of the Deadman is a roaring success, and while some chapters are certainly stronger than others, the novel will make a fitting addition to any wrestling fan’s collection. Hopefully, Boom! Studios will continue to explore wrestlers through graphic novels in the future, as this has unlimited potential.