Ahead of its UK release this Friday, we’ve got an exclusive clip from Blue Iguana, the action-packed heist comedy starring Sam Rockwell (Three Billboards Outside Ebbing, Missouri), Ben Schwartz (Parks and Recreation) and Phoebe Fox (Eye in the Sky). Check it out below… 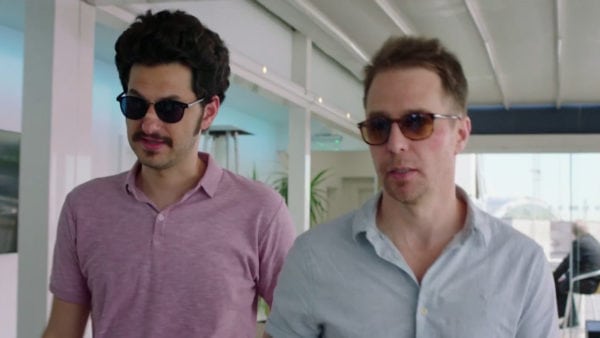 Ex-jailbirds Eddie (Sam Rockwell) and Paul (Ben Schwartz) are on parole and working as counter-hands in a New York diner. Eddie is quiet, calm, stoical and confident. Paul is loud-mouthed, impulsive, emotional and obsessed with movies. They’re best buddies and a team, but their lives are a dead end. That is, until bookworm English lawyer Katherine Rookwood (Phoebe Fox) walks into the diner with an offer they can’t refuse for a ‘simple’ job in London.

It seems a client of Katherine’s needs a package delivery interrupted, so Eddie and Paul recruit a pair of goons to help them create a distraction and hijack the package. But things go terribly wrong and Eddie, Paul, and Katherine find themselves at the mercy of a well-heeled crime boss, Arkady (Peter Polycarpou), who relies on muscle provided by a psychotic, mullet-haired thug named Deacon Bradshaw (Peter Ferdinando).

Fate rests on the whereabouts of a prize gem known as the Blue Iguana, once the property of a European princess (Frances Barber) who is hoping it will restore her status and fortune if found. With Eddie, Katherine, Paul, and their crew holed up in a funky artists loft across the street from the pub Deacon runs under the watchful eye of his oversexed mother (Amanda Donohoe), our heroes have to navigate the unpredictable actions of Deacon and the powerful grip of Arkady to liberate the Blue Iguana and return it to its rightful owner.

Blue Iguana is out in the UK in cinemas and on Digital HD on October 5th and on DVD on October 8th.