A group of troublemakers are forced to attend night school in hope that they’ll pass the GED exam to finish high school. 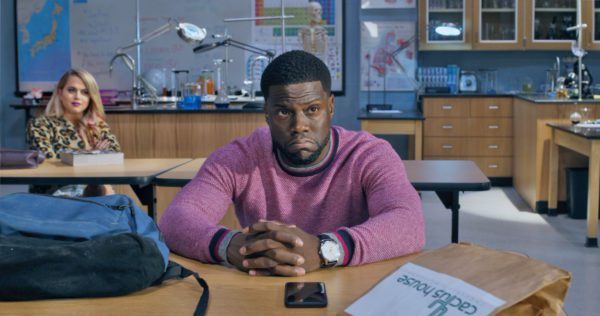 Take it from a Kevin Hart apologist (seriously, I gave Get Hard a fresh review because despite how racist the entire damn thing is I couldn’t help but laugh throughout most of it); Night School is an unmitigated disaster and likely the worst thing Kevin Hart has ever been associated with. This grown-ass man back-to-school flick is worse than I ever could have feared based on the above logline synopsis, as it opens with the hyperactive rambler playing his character 17 years younger as a high school student. Let that sink in…

This flashback prologue is meant to demonstrate that Teddy (Kevin Hart) has some kind of learning disability, hinted at by math equations and literary questions coming to life in CGI form while trying to swat away these imaginations. Yes, the film goes so low trying to wring out humor that characters ask what Teddy is doing as if he’s crazy. Furthermore, if you think the film becomes anymore grounded with its comedy once Night School shifts to the present day, I have bad news for you considering everything else is just as cartoonish (we see Kevin Hart in an explosion and multiple automobile accidents, coming away with nothing but a scratch and not a single laugh generated). Basically, Teddy wants to move up in the world (especially in terms of the workforce) partially to impress his new fiancé (I don’t remember any character’s name in this movie or the actors playing them save for Tiffany Haddish and Rob Riggle, and no professionalism would be sacrificed by not going out of my way to look up a single detail about this travesty) who already loves him as is, and for his own personal ambition that seemingly outreaches his mental limitations. As ghastly as the brief teenager segment is, at least the script (written by SIX people, including Kevin Hart himself, that when displayed in the opening credits clog up the entire freaking image) has the right idea by presenting Teddy as a mean-spirited bully that wants nothing to do with peers he can’t relate to or a school system filled with educators that have apparently given up on him and don’t want to put in the necessary extra work to prevent him from failing to receive his diploma.

The issue is that he never earned that diploma or his GED and therefore can’t receive the nice cushiony sales position offered to him, prompting him to sign up for night classes run by a new principal that was once on the receiving end of Teddy’s many hurtful remarks and a teacher (Tiffany Haddish, a highly funny presence that just can’t make any of this material come alive with hilarity, even alongside the rambunctious motormouth that is Kevin Hart) who isn’t on good terms with him either (they have another cliché encounter beforehand). Admittedly some of the classmates are entertaining to be around, whether it be a delusional married mother refusing to accept that her life surrounded by a narcissist is anything but #Blessed, an urban individual convinced that robots are going to take over the world, or prison inmate (rapper Fat Joe) participating via Skype. That last one isn’t necessarily funny, but points for creativity. 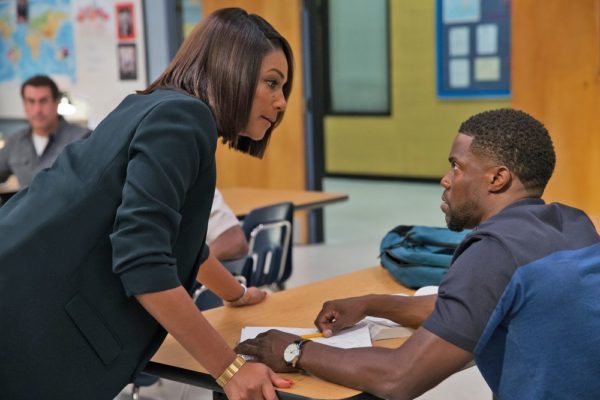 These personalities assembled are all diverse and interesting, the acting is fine, but it’s the direction and aforementioned script that drags things all over the place with no spark or chemistry between any of the performers. Some of the attempted humor is also fairly ugly, especially for the current landscape of the real world, making light of a school principal jokingly patting himself on the back for being able to restrain himself from partaking in infidelity with a lonely housewife giving extremely direct advances, so the rest of the group can steal an upcoming test. At the very least, the subplot eventually amounts to giving this woman a newfound sense of worth. Elsewhere, Kevin Hart is forced to dress up as a chicken mascot for a fast food diner specializing in Christianity and food blessed by the good Lord himself. The film does acknowledge the racial stereotype alongside the inherent degradation involved with the job, but it’s hard to shake the feeling that Kevin Hart doesn’t care and would rather see people laugh, politically incorrect or not. With that said, my problem isn’t with the fact that there is misogyny or racism on display, just the fact that if you’re going to implement those elements in a comedy, they should probably be funny or insightful.

What’s most baffling about this whole endeavor is that director Malcolm D. Lee was on quite a hot streak, recently helming Barbershop: The Next Cut and Girls Trip (which cemented Tiffany Haddish as an actor to watch), working on comedies that thoughtfully explored racial humor and other possibly offensive subjects. Night School feels like the filmmaker going back to the laziness of his Scary Movie days; maybe he saw an early cut of his cousin Spike Lee’s BlacKkKlansman and decided to phone this one in and take the loss for whatever familial rivalry might exist. It’s the only explanation I got for going from some passable movies… to this, an exercise that indulges in the director’s worst trademarks.