Microsoft has announced the line up for November’s Games With Gold and subscribers are set to receive some great games.  If you’ve not yet taken advantage of October’s offerings then there’s still a couple more days. 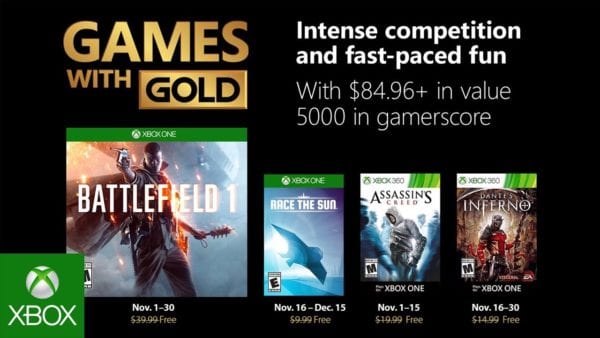 Kicking off November on Xbox One is Electronic Arts’ hit first person shooter, Battlefield 1.  Set in the period of the first World War, Battlefield 1 will see players fight with period weapons, including bolt-action rifles, submachine guns and mustard gas, through a variety of battlefields based on one of the most bloodiest wars history as ever seen.  Tanks, torpedo boats and bi-planes stand by to provide one of the most immersive FPS experiences.

Later in November is Race the Sun by indie studio Flippfly.  In this endless racing game, players control a solar-powered spaceship through a hazardous environment of laser beams, stationary obstacles and other ships.  It’s a race against time and the setting sun

For the Xbox 360 November starts with a classic game that needs no introduction, Assassin’s Creed.  The second half of November will give subscribers Visceral Games’ 2010 action game Dante’s Inferno.  Based loosely on Inferno from Dante Alighieri’s Divine Comedy, this action game will take players through the 9 circles of Hell to rescue Beatrice from the clutches of Lucifer himself.

Excited for November’s offerings? Leave a comment below and let us know what you make of this month’s titles…