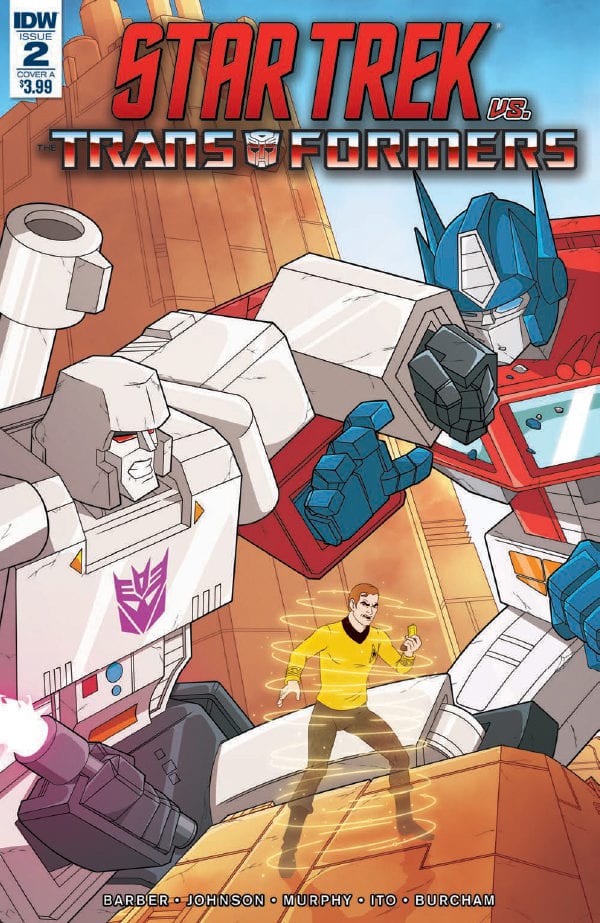 In last month’s opening issue of Star Trek Vs. Transformers, Kirk and the Away Team were introduced to the Transformers with a bang. As they answered a call for assistance at a Dilithium Mine, they were greeted by not only the Autobots but the Deceptions too.  Not being formally introduced to the Robots in Disguise, Kirk made a quick fire decision and unfortunately brought down Optimus Prime leaving the treacherous Decepticons to make their escape – only to later discover the Klingons walking around Tryticon.  Now with issue two arriving the questions are: What will happen to Optimus Prime after taking a phaser hit from Kirk? And will the Decepticons and Klingons hit it off or will it be a very brief introduction?

With McCoy, Scotty and Spock left topside of Cygnus Seven, they take to investigating the downed leader of the Autobots, it’s here that Spock senses that this fallen robot may actually be alive.  With Scotty working on Optimus physically, Spock attempts to mind meld with this ancient warrior to discover exactly what has been going on; moments later our Science Officer is given more than he bargained for.

Below the surface Kirk, Sulu and M’Ress are all currently receiving a rather unpleasant welcome from Bumblebee, Jazz and a few other furious Autobots who witnessed Kirk’s ‘shoot first’ actions planetside.  However, after some fast-paced diplomacy on the Captain’s part, the history of the galaxy – according to the Autobots – is soon delivered to Away Team and we discover how these Robots in Disguise became stuck within this Dilithium Mine.

Elsewhere in the system the Klingons have so far proven their worth to the Decepticons with both fighting spirit and cloaking technology, which has led to both seeking their first target… the U.S.S. Enterprise.

As with last month, though I appreciated the artwork from Philip Murphy, I cannot say I’m truly enjoying this series as yet.  If I were being totally honest (and I know this is sci-fi) I don’t think my brain is allowing the universes of Star Trek and Transformers to co-exist.  Even when they attempt to retcon the Transformers into Star Trek lore by having Fortress Maximus fly away over the shoulder of Zefram Cochrane.   If anything that panel alone made me silently whisper “Nope!” that little bit louder.

SEE ALSO: Check of the preview of Star Trek vs Transformers #2 here

It all feels a bit askew.  Like classic sci-fi titles have been drawn from a hat and it’s been left down to John Barber and Mike Johnson to somehow mash the world’s together, hoping at the end something enjoyable will appear.  I can see why they plumped for the Cartoon series universes; if Bumblebee had been having a discussion about a giant-space dinosaur with Picard on the Enterprise-D this would have collapsed completely.  Still it really does look good. Philip Murphy draws a great comic book.

Like the opening issue, Star Trek Vs. Transformers isn’t (as yet) a winner.  Though in its defence we’ve only just begun. Perhaps come next month all of these gripes (I have) will be a distant memory.