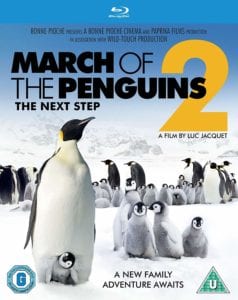 A young penguin, born into a world of cold, harsh surroundings, embarks on the major steps towards the unknown.

The first question on a lot of people’s minds when watching March of the Penguins 2: The Next Step will be ‘is this equal to the likes of Blue Planet II?’ The answer being, of course, yes and no.

First off: the yes department. The quality of image and places the cameras get to are both excellent, to the point where the word ‘invasive’ actually comes to mind. The camera gets right in there, meaning the penguins’ lives can be seen in almost every small detail.

The ‘new family adventure’, a phrase with two meanings here, being a feature length documentary means it must draw out and edit together a sustained story. The story of this documentary is that of a recently hatched penguin and its parents, struggling to survive harsh periods of time on the Antarctic ice. The story works but is a little light. It is helped along by moments where editing is used to exacerbate the feelings of drama. This includes a tension-filled series of small moments where the two parents must pass an egg between them, as we are told through voiceover that too long on the icy floor means death.

Whilst it is certainly a film for families to watch together, March of the Penguins 2 doesn’t shy away from showing the nasty things that can happen in the midst of snow and ice. Partially cracked eggs, abandoned by inexperienced or struggling parents, are discussed and the concept of death is not one that is glossed over. It does not, however, permeate the entire film as the primary story sticks with the family introduced early on. 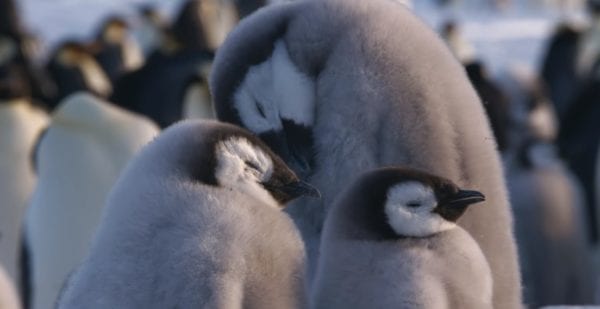 Featuring the lone wanderings of the heroic parents and talk of the penguins having good manners anthropomorphises the penguins a degree. This and the images onscreen successfully bring across the feeling of minus temperature chills. Global warming is brought up once and explained in detail for those who perhaps know not a lot, though its effect on the penguins isn’t demonstrated in too dramatic a way.

The narration is solid. Nothing more, nothing less. A solid picture is painted of the sea being possibly the penguin’s true home. Some facts are given about penguins, though nothing as memorable, exciting or particularly interesting as any other documentary could give.

The overall gentleness of the documentary makes the entire experience drag somewhat, particularly after the one-hour mark. This lack of energy means March of the Penguins 2 is tough to be energised or gripped by. It is, at most, mildly interesting. In the end, it suffers from both a thin story dragged out to feature length and comparisons to other documentaries that do this sort of thing, but better.