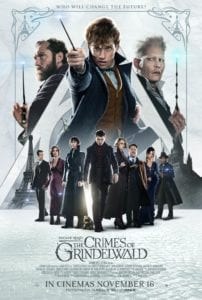 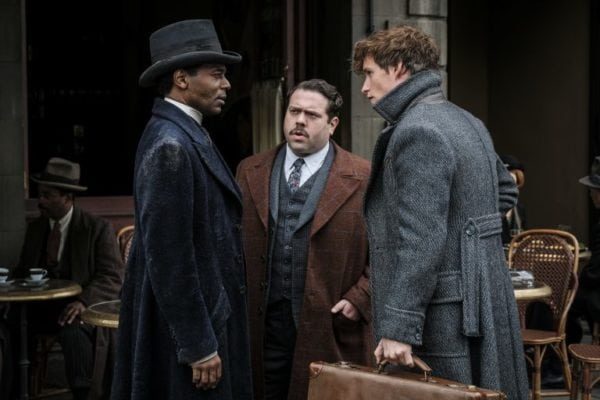 If you’re reading a review for Fantastic Beasts: The Crimes of Grindelwald it’s safe to assume you have probably seen its predecessor Fantastic Beasts and Where to Find Them (both blockbusters are prequel expansions to J.K. Rowling’s Wizarding World cinematic universe, written by her and directed by David Yates, a trusted collaborator of sorts who was entrusted with the monumental task of closing out the Harry Potter series), but if for some reason you haven’t, here’s all you need to know before I start divulging major spoilers from the first entry in the prequel lineage of films (currently, there are slated to be five): the film is overstuffed with characters and plot points, both of which often contain hazy motivations and can never be fully engaged in due to being so undercooked. With that said, things come to a rather entertaining climax with a reveal that will have diehard fans attempting to piece together where the acclaimed writer is going with the story but also simply revelling in the fun of it all.

However, are there any consequences to these events? What I remember most from Fantastic Beasts and Where to Find the Them (aside from the cutesy creatures magizoologist Newt Scamander more comfortably bonds with than people, alongside having a proven skill set for taming the bigger and rarer animals steeped in various mythologies aesthetically) is that the overall storytelling was darker than the Harry Potter movies (and rightfully so considering that this franchise is not necessarily another coming-of-age saga, despite dealing with another protagonist that is an outcast), to the point where a pair of supporting characters (average human Jacob Kowalski played by Dan Fogler and magic user Queenie Goldstein played by Alison Sudol in what was her on-screen performance) that were very much in love and believably so considering the competent script, direction, and acting, had to forego continuing such a romance because of the laws currently in place regarding such affairs. Jacob’s memory was wiped, and I for one was curious to see how this already established gripping grown-up plot would further develop along within the series.

It’s immediately resolved as the characters are reintroduced to the story. Why? I suppose J.K. Rowling woke up one morning and decided that this was not how she wanted to integrate real-world societal debates (centered on who we can and cannot love but filtered through her unparalleled imagination) into the universe, in favor of doing so by decking out Johnny Depp as Grindelwald looking ghostly with punk rock white hair as if he’s some rejected conceptual design of a ghost from A Christmas Carol and having him plan for magical world dominance, viewing everyone else as inferior. Sadness and love have been swapped out for fascism and Make Wizarding Great Again allegories. Whatever, at least Johnny Depp appears to be putting in some effort.

To be fair, Fantastic Beasts: The Crimes of Grindelwald is mildly concerned with these characters, it’s just also concerned with many more (both new and old, including some that have direct ties to both heroes and villains of the Harry Potter series) quickly becoming unwieldy and cumbersome, all to the point where the first hour is just a collection of scenes smashed together in desperate hopes of finding a coherent narrative (Katherine Waterston’s understanding of Newt being unable to communicate with her boils down to marriage news being incorrectly printed and made public knowledge, which is either incredibly lazy writing or a far too forced Fake News parallel. I’m not sure which is worse). For the most part, one does exist, but only if you drop the white noise and only focus on Ezra Miller’s returning physically abuse and magically repressed orphan Credence, seeking answers to his identity.

The problem is that he never registers as an actual character, or someone actually interested in understanding who he is, just which bloodline of which he is a descendant. And while some of this makes for some intriguing mystery fare, it’s also admittedly lame that the only reason to keep watching this mess is to find out who this particular character is related to. The political parallels are far too blunt to mean anything substantial, Jude Law’s younger portrayal of revered wizard Albus Dumbledore is fine but more of a glorified cameo than anything, J.K. Rowling is clearly more interested in hiding as much backstory as possible regarding the dynamic between Grindelwald and Dumbledore, and watching Eddie Redmayne interrupt whatever flow that does exist to tame some colorful looking monsters (at least the creatures are a reprieve from the dreary and bland color palette once again present) somehow feels out of place.

Just read the title- Fantastic Beasts: The Crimes of Grindelwald; those two components have nothing to do with each other whatsoever and J.K. Rowling apparently has no functioning idea of how to make them coexist. It’s like if a Pokémon game suddenly threw in some objectives for you to overthrow a fascist potentially coming into power. Newt is decidedly the hero of this new series, but no one has any idea of how it should work. Apparently, we are just not supposed to care and should instead pay attention to the swirling red and blue CGI effects eating away at one another representing good versus evil. The narrative itself is similarly like those fires, subplots duking it out with one another for more screentime and depth.