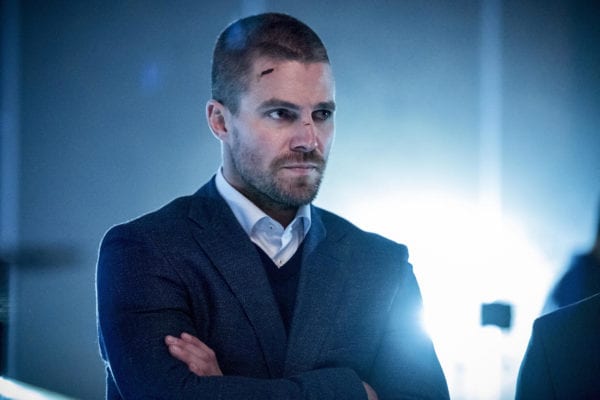 Oliver is out of prison and back in Star City… how will it’s denizens treat him?

– Our future storyline has a few good moments; I like the cage fight we started off with; pretty brutal. I really liked how Dinah pulled the thoughts out of William’s head in their scene together; she’s training him to think like his father. The Mark of 4? Pretty darn cool.

– And such a little thing, something that could easily get overshadowed; Dinah’s makeup in the future. She’s got the crow’s nest under her eyes, and it’s just really good detail. I thought Julianna Harkavay was pretty on point in this episode, in both present and future.

– Rene was pretty funny, and made up for no real Curtis this week. He sounds like a politician; that would be one intriguing storyline if they went that way and they foreshadowed it in the future scenes with Zoe.

– “She threw my ass in jail!” Rene when asked about helping the new Green Arrow and Dinah’s reaction.

– I wrote down during the first few minutes: “Oliver should just be a cop” I thought Stephen Amell was fantastic as a pseudo cop in his scene with Fuller at the club.

– WHOA – Oliver has a secret sister!!

– And a Sick ending! I am so pumped for Elseworlds I can’t stand it!! 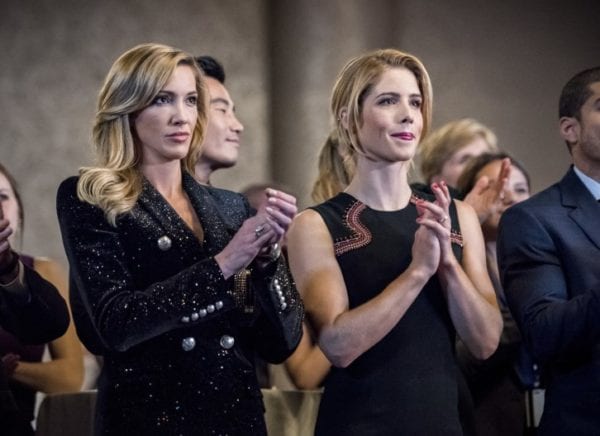 The Not So Good:

– Max Fuller….ugh. With this guy and the young lady playing Black Star, I thought the guest support was not there as far as acting. Very hammy.

– Felicity descent into villainy, or a terrorist, we’re not really sure. This storyline I think sucks. I am sure all the Felicity haters out there are probably enjoying it though. And did she really intimate she wanted time apart from Oliver? That’s so hard to swallow considering all they have been through. A Real married couple, committed couple in love, works through it with each other’s help.

– Did Oliver seriously just walk out in front of that nightclub crowd with no mask? (a few minutes later)…..Ohhhhhhh! He is a cop!

– Mayor Pollard…yikes….is it horrible I’m wondering how long until the next mayor is assassinated?

– I was loving the spycraft sidestory of the Diggles but this better pay off bringing Diaz back in the fold just one ep later.

I’m going 7 out of 10 for the rating. There were some things I think paid off well (Oliver’s release) but the Felicity stuff needs help.