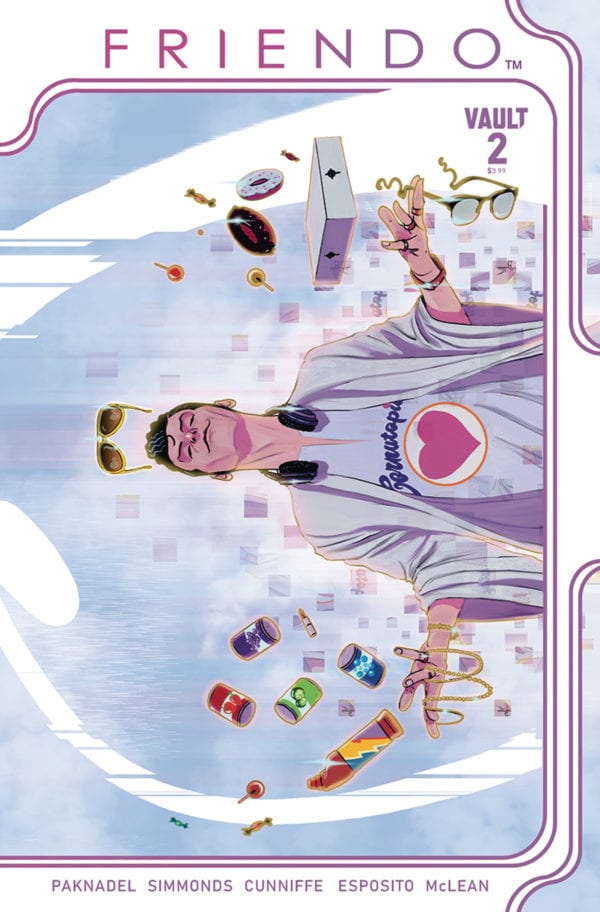 The series Friendo is a strange and interesting mix of consumer culture and a somewhat abusive relationship. The characters in the story are quirky and interesting while allowing a very dark wave to come over the story, opening readers to some violent scenes that you may not have been expecting.

The story starts out with lead character Leo being disciplined by his religious father for wanting to be a normal child, and quickly progresses to his adult life in which he struggles to be his own man. The relationship that Leo builds with friends and lovers always seems to be a struggling type – his character can never catch a win. Then his girlfriend buys him the latest VR googles called Glaze, built in with the “Friendo” app, this virtual friend is your buddy within the glasses and your online link to the world.

An accident in issue #1 caused the Friendo app to slightly malfunction and is maybe now not promoting a healthy relationship with Leo. The second issue opens with Leo in recovery from issue #1’s conclusion, and his dependency on the Glaze glasses is effecting his personal life and relationships with those around him.

The issue opens up the horrific relationship that the Friendo app companion, Jerry, is only going to be Leo’s friend if the core component of the Friendo app is met – this component is “intent to purchase”. The friendship relies on Leo getting himself into debt just to keep his new friend around, and in the meantime his need to impress Jerry strains his real life relationship with his girlfriend to a breaking point.

Friendo #2 concludes after some self reflection with Leo – his luck is at its lowest and he has nothing else to lose. His journey is somewhat guided by Jerry and leads him to a store, where Leo gets to confront an issue from his past.

So far, Friendo is very different to the usual things I read for review, and I enjoy that. This tale is new and refreshing – I am in a world where these are real issues and might not be too far removed from reality. It almost reflects on the nature of humans in general, more than ever with Christmas around the corner. The need to buy things to impress those around us is not what should define us as people, but rather the make up of our characters.

I may have got a little preachy in that last sentence, though the issue has been nothing short of thought provoking. I very much look forward to where the story goes next.