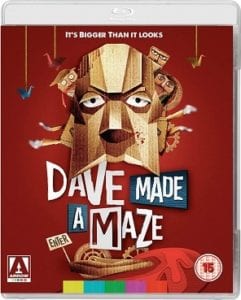 When Dave gets lost in the cardboard labyrinth he built in his front room his friends have to go in and rescue him, encountering a strange world of cardboard monsters and traps.

Every once in a while a movie comes along that is so quirky, ridiculous and completely out there that it really defies criticism. Bill Watterson’s directorial debut Dave Made a Maze is a labour of love that took nearly five years to make and is destined to become a future cult favourite based on the fact that it makes little-to-no sense but was clearly made with a passion that is almost tangible and requires a little bit of imagination to get the most out of it.

The initial premise is that Annie (Meera Rohit Kumbhani – Weird Losers) comes home to the apartment she shares with boyfriend Dave (Nick Thune – Knocked Up) and discovers that not only has he built a cardboard fort in their front room but also that he is lost inside of it. How is he lost when he is still in his front room? Because Dave has never finished anything in his life and once he started building he couldn’t stop, creating a huge labyrinth filled with cardboard booby traps, cardboard monsters, cardboard vaginal openings (you really need to see it), cardboard caricatures of the main characters (for no reason at all, which makes them even funnier) and a Minotaur. So Annie, friend Gordon (Adam Busch – Leon) and a small group of oddball characters enter the labyrinth to try and bring Dave back.

Yes, Dave Made a Maze is weird and takes a lot for granted as you have to accept that this cardboard structure has become sentient and grown out of our reality and into the abstract without any given explanation but – and this is key to enjoying the film – if you can apply a little imagination to what the filmmakers have set out then the film works as a charming fantasy adventure with a clever twist on presenting horror and a very witty edge, and if you connect with it like Bill Watterson sincerely hopes you will then it will also push all of those ‘80s nostalgia buttons but without being overt about it. Witterson himself claims The Muppet Show, The Goonies and Ghostbusters as influences, and while some of those are more obvious influences than others there are some more blatant nods to Indiana Jones and, funnily enough, Labyrinth.

The downside of Dave Made a Maze is if you don’t connect with it but such is the joy and hard work that went into making it that even if you’re not quite in touch with your inner ‘80s child then you can at least appreciate what was trying to be achieved. And to top it all off, Dave Made a Maze is a comedy that is actually funny, especially the character of Gordon who acts as the audience’s mouthpiece in a very dry and self-aware way, and even when the film takes the odd dark turn here and there you cannot escape the goofy (in a good way) tone that keeps you engaged while you wait for the next bizarre reveal.

There aren’t a whole lot of special features on the disc (mainly because the film is open to various interpretations so how much can the cast and crew tell you?) but what there is makes for a fun look at how to put a passion project together. The 22-minute ‘Behind the Scenes’ featurette sheds a light on the inception and how Bill Watterson got the idea from a childhood memory of his mother destroying his cardboard fort when she couldn’t find him, and the enthusiasm from everybody interviewed is infectious. There are also extended and deleted scenes, an amusing theatrical introduction from Bill Watterson (and his cardboard friends), various promotional spots and clips from film festivals, the original fundraising pitch video (with a soundtrack provided by Bill Watterson because they couldn’t use the original score) and an audio commentary by Bill Watterson and co-writer Steven Sears that fills in any gaps that the other bits may have left.

Dave Made a Maze is an odd sell as it clearly won’t appeal to everyone but even if you cannot accept the premise of a giant cardboard maze in your front room that is trying to kill you there is no getting away from the fact that Bill Watterson had an idea – albeit a very strange one – and made it into a film that, if nothing else, needs to be seen just for its originality, and even if it doesn’t make many Top Ten lists at the end of the year it will likely be the indie film from 2019 that is most remembered.